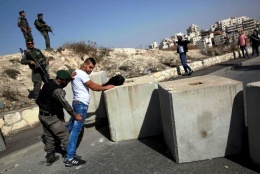 The Palestinian Human Rights Organizations Council (PHROC) and the Civic Coalition for Palestinian Rights in Jerusalem (CCPRJ) deplore and condemn all forms of attacks on civilians, and emphasize that the current escalation in violence cannot be explained, addressed or remedied in a vacuum. There is a root cause for this violence – Israel’s continued violations of international law, including its brutal and illegal military occupation of the Occupied Palestinian Territory (OPT) that has lasted 48 years and its racist policies against Palestinian citizens of Israel - and this root cause cannot be ignored. The undersigned human rights organization stress that all Palestinians, regardless of where they live, are fighting a common struggle to exercise their right of self-determination.

During the last three weeks, the Israeli Occupation Forces (IOF) have killed 46 Palestinians, including 10 children, and injured over 5,000 Palestinians. Eight Jewish Israelis have been killed. The upsurge in violence is the result of the growing frustration of generations of Palestinians who have lived under military occupation with no promise of change in the future. Instead of hope, Palestinians have grown accustomed to Israel's continued confiscation of their land and the displacement of its inhabitants; the demolition of their homes; the aggressive expansion of Israeli settler colonies (settlements); settler violence against Palestinians and their property facilitated by the state; torture and ill-treatment; and increasing numbers of arbitrary arrests and administrative detentions, amongst other manifestations of Israel's violent occupation. Therefore, the only way to address this rise in violence is to end to the occupation.

Frustrations have been increasingly mounting due to Israel's latest intensification of attacks against East Jerusalem and its residents. The attacks come in various forms, including restricting and denying Palestinian access to the Al-Aqsa Mosque Compound while continuing to back incursions by settler groups into the Compound. This has led Palestinians across the OPT, including East Jerusalem, and in Israel, to take to the streets and exercise their right to demonstrate against and resist the Israeli occupation. In response, Israel has accelerated measures that further entrench the occupation and suppress Palestinian resistance. These measure include the use of excessive, and often lethal, force against Palestinian protesters in both the OPT and Israel, the use of punitive home demolitions, and an increase in the number of arrests and detentions. In Gaza, as the unlawful closure policy continues, the IOF killed 15 protestors (5 children) and injured approximately 680, since 9 October 2015. The protestors posed no apparent threat to the life of fortified Israeli soldiers in the border areas.

The undersigned human rights organizations strongly condemn the extreme measures that Israel has taken in recent weeks and calls on the international community to take action. Of specific concern is Israel's arbitrary and expansive use of live fire, in part due to the recent relaxation of live-fire regulations for stone-throwers, and the excessive use of force against Palestinian demonstrators both by the IOF in the OPT and Israeli police in Israel. Our organizations are also deeply troubled by Israel's apparent practice of shoot to kill in cases where Palestinians carry out or are merely suspected of carrying out attacks against Israelis. Palestinian deaths under these circumstances may amount to wilful killings and/or extrajudicial killings. As the number of Palestinian deaths rise, Israel has not questioned whether the use of force in any circumstance was necessary or proportional. No credible and transparent investigations have taken place, even with increasing video evidence that puts into question the actions of the IOF. Instead, Israeli leaders have justified and encouraged increased use of force. For example, Jerusalem Mayor Nir Barakat urged Israeli civilians to carry their weapons, and Member of Knesset Yair Lapid stated, “you have to shoot to kill anyone who pulls out a knife or screwdriver.”

PHROC and CCPRJ also call specific attention to Israel's use of the current escalation in violence and security as a pretext to expedite the implementation of longstanding policies aimed at erasing Palestinian presence from occupied East Jerusalem. This is clear given the Israeli security cabinet’s recent authorizations to impose closures on Palestinian neighborhoods, demolish the homes of alleged attackers and their families without the ability to rebuild, revoke Jerusalem permanent residency for all alleged attackers, and the confiscation of their property, among other measures. Many of these measures constitute unlawful collective punishment under international law. These measures also undermine the fundamental rights of East Jerusalemites, including freedom of movement, freedom to choose one’s residence, and right to an adequate standard of living. Palestinians' right to life and right to health is also compromised, as shown by the death of an elderly woman after being delayed from reaching a nearby hospital because of an Israeli checkpoint recently erected in the Al-Issawiya neighborhood of East Jerusalem.

We have long called on the international community to hold Israel, as the Occupying Power, accountable for its violations of international law. Lack of action by the international community and third state parties encourages Israel to continue these violations. The United Nations and members states, therefore, share responsibility for the renewed surge of violence across the OPT and Israel because of their failure to recognize and address the systematic violence inherent to the Israeli system of occupation, settler colonialism, and apartheid that has oppressed Palestinians for decades.

We, therefore, call on the international community to: