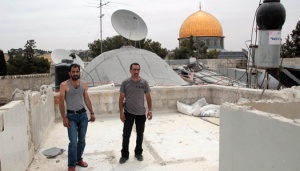 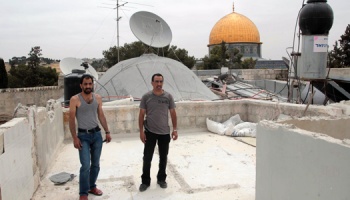 Last week there were two house demolitions in occupied East Jerusalem resulting in the displacement of two families, including six children. In both incidents the owners of the properties were forced to carry out the demolitions themselves. Had they refused the Israeli judiciary would have ordered the homes to be destroyed by Israeli forces and for the owners to pay a large fine.

Family of eight displaced from the Old City of Jerusalem

On 19 May, ‘Azzam, along with his wife and six children, was displaced from their home, located near the walls surrounding the Al-Aqsa mosque, in the Old City of Jerusalem. ‘Azzam and his family were forced to self-demolish the house due to a court decision after having lived there for the last 16 years.

The court ruling provided ‘Azzam with two options: either to proceed with the self-demolition of his 500-square-metre property or to accept the demolition to be carried out by the Israeli authorities at a cost of NIS 100,000 (about USD 25,600).  He also faced the possibility of imprisonment if he did not demolish his own home.

In 2010, the Israeli judiciary declared ‘Azzam’s property illegal on the pretext that it was built without a permit; in that occasion the court did not issue a demolition order. Since then ‘Azzam was ordered to pay two fines of NIS 10,000 each (about USD 2,500). Despite having paid the fines, on 17 May, the judge issued a demolition order and ‘Azzam had no choice but to destroy the house himself. It took him a full week to complete the demolition.

‘Azzam and his family now live in a different area of East Jerusalem, al-‘Eisawiya, and have to pay NIS 1,800 per month (USD 460) as rent. ‘Azzam, who is the only breadwinner of the family with a monthly salary of 4,200 NIS (about USD 1,000), is now struggling to provide for his family.

Newlyweds demolish their own home in Sour Baher

In a similar incident on 25 May, Walid ‘Adnan Bkeirat demolished his own home located in Sour Baher in East Jerusalem. The 100-square-meter house had been built in 1998 and was worth more than NIS 200,000 (about USD 51,200). Like ‘Azzam, Walid had to choose the lesser of two evils: carrying out the self-demolition in order to prevent the Israeli authorities from implementing the demolition order. The latter would have resulted in Walid being charged a fine of around NIS 50,000 (about USD 12,800) and further NIS 150,000 (about USD 38,400) for the costs of the demolition operation.

In 2010, Walid had been ordered by the Israeli judge to pay a fine of NIS 25.000 (about NIS 6,400) because the house had been built without a permit. He then applied for a permit to avoid being issued future demolition orders, but the permit was denied. On 5 March, the court ruled that Walid had two months to demolish his house or the demolition would have been carried out by the Israeli authorities and he would have had to pay for the demolition operation.

As a result of the demolition order, Walid and his new wife, who married in December 2011, were never able to move into the home they planned for their new family. They are now living in a property belonging to their family.

Palestinian Jerusalemites are only allowed to build on 7 per cent of the land in Jerusalem, even though they make up about 30 per cent of the city’s population. Despite a shortage of around 25,000 housing units in East Jerusalem; the Jerusalem Municipality only grants 50 to 100 building permits per year for Palestinians.

The Palestinian population of occupied East Jerusalem is also faced with discrimination in urban planning as Israel designates land surrounding Palestinian neighbourhoods as “green land” or “un-zoned land” where construction is prohibited.

Additionally, the cost of permits and the legal aid required to obtain these permits usually exceeds the financial capabilities of the average East Jerusalem Palestinian resident.

The discriminatory policies of obtaining building permits force many Palestinians in East Jerusalem, such as ‘Azzam and Walid, to build homes for their families without the required Israeli building permits in an attempt to avoid being forcibly transferred from the city by Israeli forces.