Main Menu
Continuous Collective Punishment in ‘Awarta
Latest Topics
Mind the Gap Submission to the UN Working Group on Business and Human Rights
Al-Haq Submits Two Urgent Appeals on Israel’s Designations to the United Nations Special Procedures, Calling for Immediate Action to Protect Palestinian Human Rights Defenders
Special Focus: Use of Excessive Force by the Israeli Occupying Forces, the Case of Abdallah Abu Baker
In the Wake of the COP26, Al-Haq Submits Its Report on Human Rights and Climate Change to the Office of the High Commissioner for Human
In Brief: Escalations in Jerusalem
Establishing Guidelines: To Determine whether the Legal Status of ‘Area C’ in the Occupied Palestinian Territory represents Annexed Territory under International Law
Continuous Collective Punishment in ‘Awarta
- 3 - 9 September - Ref.: 193/2012
13، Sept 2012 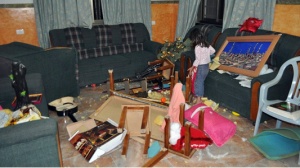 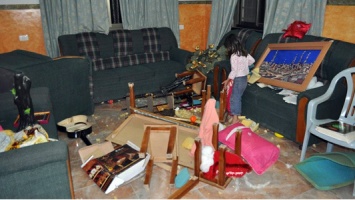 Since March 2011, the Israeli army has been conducting indiscriminate and arbitrary attacks against the residents of the Palestinian village of ‘Awarta (Nablus governorate) in retribution for the appalling murder of five members of an Israeli family from the nearby ‘Itamar’ settlement on 11 March 2011. Two Palestinian residents of ‘Awarta were subsequently convicted of the crime.

For 18 months, the Israeli military, still ostensibly investigating the case, has repeatedly raided the village, ransacked houses and destroyed private possessions while intimidating and harassing the resident of the village. These violent measures, as described in Al-Haq case study Collective Punishment in ‘Awarta – Israel’s Response to the Killing in ‘Itamar’ Settlement, amount to collective punishment against protected persons. 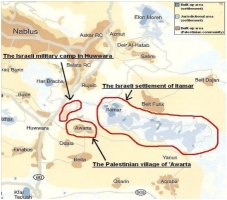 Last week, Al-Haq documented the case of Mazen Niyyaz 'Awwad (45 years old), whose home was raided and family members intimidated and threatened by the Israeli military. Mazen is the father of Hakim (19 years old), one of the two Palestinians convicted of the murders. Hakim was arrested on 5 April 2011 and sentenced to five life sentences.

On 4 September 2012, at approximately 10:30 pm, when Mazen returned to his home he found it surrounded by Israeli soldiers who then pointed their weapons at him. Mazen also saw his son George (22 years old) handcuffed and in the custody of two soldiers.

Mazen was ordered to enter his home and to stay in one room with his wife and children while the soldiers searched the house. Soon afterwards, an Israeli officer and other soldiers arrived in the room and ransacked it, while Mazen was able to hear other military patrols arriving in the street. Mazen was then taken to the living room where he found two officers of the Israeli Intelligence and his son George barefoot with his hands still cuffed behind his back.

While one of the two Intelligence officers was destroying the furniture in the living room, also Mazen’s wife, Nouf Salim 'Awwad (39 years old), was brought in the room and the door was closed. The second Intelligence officer, who had interrogated and intimidated Mazen the previous week, put a knife against Mazen’s neck and told him, in Arabic, that they were destroying the home because “they gave birth to Hakim” and to teach a lesson to the entire village.

When Mazen’s wife protested, the officer threw a vase at her, but it smashed against the wall without harming her. The soldiers continued to ransack the house despite the protests of Nouf, who disregarded the Intelligence officer’s threat of arrest if she did not remain silent. The raid lasted for almost one hour, at approximately 11:45 pm the Israeli patrols left the village taking George with them.

Mazen’s home had been already raided the previous week. On 29 August at approximately 3:00 am, the Israeli army surrounded the home and ransacked it, while the entire family was forced to wait outside with weapons aimed at them. The Israeli soldiers questioned Mazen about his son George, who was not at home at that time. The soldiers ordered Mazen to report to Huwwara military base the following morning. On 30 August 2012 at 9:00 am, Mazen arrived at the military base and was handcuffed, blindfolded, insulted and questioned, for more than 15 hours, about his son George and about Hakim’s involvement in the killing of the settler family. On 31 August at 4:30 am, Mazen was released and on his way out the military base he saw other villagers from ‘Awarta who were being taken for interrogation. (Al-Haq Affidavit No. 7710/2012)

Al-Haq condemns the continuous attacks and intimidation targeting the residents of ‘Awarta, and reaffirms the international obligations binding on Israel to ensure respect and protection to the occupied population. While conducting any investigation Israel must abide by its legal obligations under international human rights law.