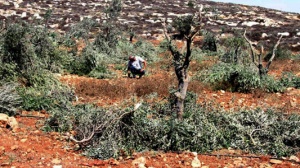 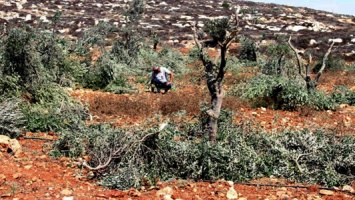 Each year, the olive harvest in the Occupied Palestinian Territory (OPT) is characterised by settlers attacks which severely impact upon the livelihood and safety of Palestinian farmers. Since the beginning of October, Al-Haq has documented the destruction, burning, uprooting or damaging of at least 747 olive trees and more than 29 farmers have been attacked by Israeli settlers. Most of the incidents are concentrated in the areas of Nablus, Qalqiliya, Bethlehem, Ramallah and Hebron in proximity to the Annexation Wall or Israeli settlements and outposts. Between January and mid-October 2012, more than 7,500 olive trees belonging to Palestinians in the West Bank were damaged or destroyed by Israeli settlers. Between 8 and 14 October, Al-Haq recorded 14 settler attacks related to the olive harvest.

According to the United Nations Office for the Coordination of Humanitarian Assistance (UN OCHA), the olive oil industry currently supports the livelihoods of an estimated 80,000 Palestinian families, a decrease of 20 per cent compared to 2011. Thousands of Palestinian farmers are prevented from accessing their land by the Israeli military for most of the year, and as such are often unable to cultivate or harvest their olive crop. Farmers are often allowed access to their land for only very short periods of time, which sometimes come too late in the season, to harvest their olive crop.

On 9 October 2012, at approximately 4:00 pm, Jawad Thabet Abu ‘Eisheh (39 years old), saw five Israeli settlers coming from the direction of ‘Ramat Eshay’ outpost and collecting olives from trees on his land close to the Old City of Hebron. When he informed two Israeli soldiers at the nearby checkpoint of Tel Rmeida they ignored his requests for help and only intervened to allow the settlers to return to the outpost with two buckets full of olives. The soldiers also ignored Jawad’s attempts to report the incident.

The following morning, Jawad and his family were harvesting their olive crop when they were surrounded by Israeli settlers and repeatedly ordered by an Israeli soldier to stop their work. Jawad refused to do so unless he was presented with a written order. Eventually, he was forced to stop working and an officer from the Israeli Coordination Office informed Jawad that residents of the neighbourhood were only allowed to harvest between 15 and 21 October and in some cases only after 21 October. When Jawad expressed the fear that all of his olives would be stolen by settlers by that time, the officer agreed that the family could harvest the olives without interruption and promised to prevent the settlers from interfering or stealing the olives.

However, on the morning of 12 October, Jawad and his family were verbally assaulted by settlers and again ordered by an Israeli soldier to stop picking olives. Later, an Israeli soldier appeared with a map and explained that part of the land was a closed military zone and that any collection of olives in that area was prohibited. When Jawad refused once more to stop working unless presented with a written order, ten soldiers, accompanied by a police officer, arrived at the scene. In addition, approximately 30 settlers surrounded the area, directing obscene insults at the family and pushing several of them  while the soldiers made no attempt to intervene.

When a physical confrontation erupted between the settlers and Jawad’s family, the Israeli soldiers arrested Jawad’s brother Nour and a Palestinian neighbour named Ya’hya. Settlers continued to harass Jawad and his family, and, despite the presence of the soldiers, managed to push a 75-year-old Palestinian man to the ground, causing him to faint for a short period of time.

At 1:30 pm, Nour and Ya’hya were released. A senior Israeli officer ordered Jawad to retrieve their tools from the land and to leave the olives that had already been picked in a nearby storage area. At the time of writing, he had not been allowed to retrieve these olives. Jawad has not been permitted to enter the area since, and does not know if he will be allowed to finish the harvest before it is too late. (Al-Haq Affidavit No. 7756/2012)

These attacks not only deprive Palestinian farmers and their families of their main source of livelihood but also have severe implications for next year’s olive harvest. Al-Haq condemns the repeated attacks during the olive harvest and the lack of protection granted to Palestinian farmers and their families. Furthermore, Al-Haq would like to reiterate the fact that settlers are continuously granted impunity by the Israeli authorities for such attacks and echoes the criticism expressed by the UN special coordinator for the Middle East peace process, Robert Serry, who on Sunday reaffirmed the obligation of Israel to bring the perpetrators of these attacks to justice.