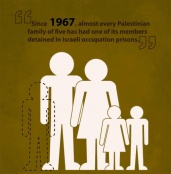 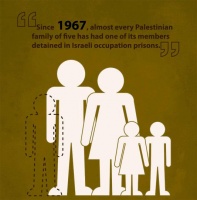 As of 20 December 4,656 Palestinian political prisoners are held in Israeli prisons, 178 of whom are administrative detainees. Israel systematically resorts to administrative detention to detain Palestinians without charge or trial on the basis of secret evidence that is not made available to them or their lawyers, thus undermining their ability to effectively challenge the detention order. Administrative detainees are tried by Israeli military tribunals that do not conform to due process standards, and endure harsh detention conditions as a result of Israel’s disregard of international legal obligations.

Earlier this year, between 17 April and 14 May 2012, more than 2,000 Palestinian prisoners held in Israeli prisons engaged in a mass hunger strike, demanding that Israel end administrative detention and punitive measures, such as long-term isolation. On 14 May, the representatives of Palestinian prisoners and Israel authorities concluded an agreement whereby the latter committed to meet some of the prisoners’ requests, including an end to the solitary confinement of 19 prisoners who had been held in long-term isolation, and the granting of permission to families from the Gaza Strip to visit their relatives held in Israeli prisons.

Following the agreement, Israel continued to arbitrarily arrest Palestinians and detain them under administrative detention. Throughout the year, Palestinian prisoners continued to undertake hunger strikes, claiming their rights and in protest against their illegal arrest and detention.

In April 2002, Samer al-‘Issawi was arrested by on allegations that he was in command of a military group reportedly affiliated with the Popular Front for the Liberation of Palestine (PFLP). Subsequently, Samer was sentenced to 30 years of imprisonment.

On 18 October 2011, after having already served ten years of his sentence, Samer was among the 1,027 Palestinian prisoners released as part of the prisoners swap agreed by Israel and Hamas in exchange for captured Israeli soldier Gilad Shalit. Following his release, Samer tried to rebuild his life, started a small business in al-‘Eisawiyya and planned to get married. On several occasions, the Israeli military prevented Samer from travelling to the rest of the West Bank, claiming that this restriction was established under the agreement that led to his release.

On 7 July 2012, nine months after his release, Israeli soldiers arrested Samer while he was going to work. At approximately 1:30 am, Israeli policemen from the Russian compound police station in west Jerusalem called the al-‘Issawi family to inform them that Samer had been arrested. The Israeli intelligence held Samer at the Russian police compound, where he was prevented from seeing his family and having access to his lawyer. During his 28-day-long detention at the Russian compound, Samer was subjected on a daily basis to solitary confinement, 22-hour-long interrogation sessions and sleep deprivation techniques. The Israeli prosecution has been trying to reinstate Samer’s 2002 sentence, which would result in him serving further 20 years of imprisonment. On 1 August, Samer began his hunger strike as a form of protest against his arbitrary detention. (Al-Haq Affidavit No. 7784/2012)

Samer is currently detained at al-Ramla prison medical clinic and is in his 142nd day of hunger strike. Throughout his long-term hunger strike, Samer’s health condition drastically deteriorated. In addition to an extreme loss of weight, Samer suffers from pain in his muscles and frequently loses consciousness. Furthermore, he is not able to stand and during his transfers to the court he needs a wheelchair.

On 18 December, during a court hearing on his case, Samer, his brother, mother and sister, were assaulted by the court guards. Later the same day, the Israeli forces arrested Samer’s sister, Shirin (34 years old), who was released after 24 hours and sentenced to ten days of house arrest. 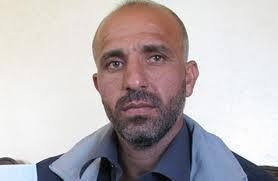 On 20 May 2002, the Israeli forces arrested Ayman Isma’il Sharawna (37 years old), who was later sentenced to 38 years of detention. On 18 October 2011, Ayman was conditionally released as part of the prisoners exchange deal.

Three months after his release, on 31 January 2012, the Israeli forces raided Ayman’s home in Dura village (Hebron governorate) and arrested him based on secret evidence, claiming that he breached the terms of his release. Upon his arrest, Ayman was taken to Etzion Detention Centre, then to Ofer Prison and finally transferred to Ramon Prison. Like in Samer’s case, the Israeli prosecutors have been trying to reinstate the previous sentence against Ayman, according to which he would have to serve 28 years in prison.

On 1 July 2012, Ayman began a hunger strike calling for his immediate release from prison. After a month of hunger strike, Ayman was transferred from Ramon prison to al-Ramla prison medical clinic where he is currently being held. As a consequence of his hunger strike, Ayman is suffering from several health problems, especially in his back, knees, and kidney. (Al-Haq Affidavit No. 7688/2012). Ayman has been on hunger strike for 173 days.

The other hunger strikers, Yousef Sha’ban Yassin (29 years old), Ja’far Ibrahim ‘Izz-al-Din (41 years old) and Tareq Husein Qa’dan (40 years old) are being held at the Megiddo prison. They were all arrested on 22 November, following the Israeli military offensive on the Gaza Strip and have been on hunger strike for 23 days in protest against their administrative detention.

Al-Haq expresses its deep concern about the severe health condition of the five hunger strikers held in Israeli prisons and calls for their immediate release.

Al-Haq condemns the Israeli illegal practice of administrative detention. Under international humanitarian law, Israel could resort to internment, that is the correct legal terminology for administrative detention, only for “imperative reasons of security” and even in those cases the internees cannot be transferred outside the occupied territory. In addition, when the Occupying Power arrest and detain civilians, it must always comply with its human rights obligations, especially the right to a fair trial and the right of all persons deprived of their liberty to be treated with humanity.. Al-Haq urges the international community to demand that Israel end the practice of administrative detention and calls upon Israel to comply with its obligations under humanitarian and human rights law.