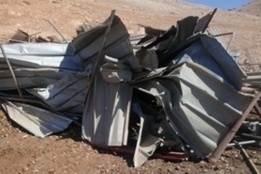 On 16 September, Israeli forces demolished Khirbet Makhul, located 20 kilometres to the east of Toubas city, in the northern Jordan Valley area. The land on which Khirbet Makhul is located is classified as Area C, meaning that it is under full Israeli control. Khirbet Makhul has a population of approximately 60 people, most of whom dwell in residential structures built with zinc boards, wood and canvas. The locals depend on herding for a living and keep their cattle in animal barracks or barns. Despite the fact that Khirbet Makhul has been inhabited since 1967, its infrastructure is nonexistent - there are neither water or electricity networks, nor health centres or schools.

On 16 September at approximately 5:00 am, Ahmad, 74, witnessed the arrival of Israeli forces and officials in Khirbet Makhul. There were eight military jeeps, four white jeeps belonging to the Building Planning Department of the Israeli Civil Administration (ICA) and three bulldozers. The military forces imposed a blockade on Khirbet Makhul and immediately began demolishing the community’s residential structures and properties. This process lasted until 9:00 am, by which time all of the structures lay in ruins.

The Israeli forces destroyed Ahmad’s 60 metres squared residential structure and four of his animal barracks. In addition to Ahmad’s structures, a further 10 were demolished in Khirbet Makhul by the Israeli forces that morning. Ahmad states that the residents of Khirbet Makhul did not receive any prior notification from the Israeli authorities regarding the demolitions. According to Ahmad, the Israeli forces allowed the residents to remove their belongings from their homes and animal barracks before they began knocking them down. Ahmad and his family have been rendered homeless and their 100 sheep without shelter as a result of the demolition operation. (Al-Haq Affidavit No. 9010/2013)

Burhan, 40, has been a resident of Khirbet Makhul for the past eight years. Burhan and his wife, along with their eight children, lost their home on the morning of 16 September, when the Israeli forces demolished their residential structures, a barn, an animal barrack and other property. Burhan attests that the residents were not given prior notification of last week’s demolition operation by the Israeli authorities. Burhan fears that he will not be allowed to rebuild his home and that he and his family will be expelled from Khirbet Makhul by the Israeli authorities. (Al-Haq Affidavit No. 9011/2013) 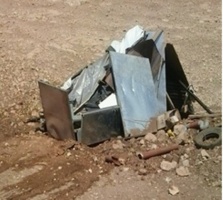 The Israeli authorities claim that the demolition in Khirbet Makhul took place due to lack of building permits on behalf of the residents and because it is located in a closed military zone. However, the residents confirm that they were living in the Jordan Valley long before it was occupied by Israel. Some residents have documents proving their legal ownership of the land while others have documents verifying a legal rental contract from the original owners. Furthermore, the residents of Khirbet Makhul claim that the Israeli authorities deny building permits to Palestinian communities in the Northern Jordan Valley area on the basis that it is considered a military zone.

On 18 September, an Israeli military force raided Khirbet Makhul prohibiting the residents from setting up tents that had been provided to them by the International Committee of the Red Cross. At 2:00 pm the following day, Israeli military forces raided Khirbet Makhul again. They destroyed and confiscated approximately four tents. Even though Khirbet Makhul itself had never been a closed military zone, the Israeli forces declared it so that day. At the time of writing, male residents remain in the area while women and children have taken up temporary residence in Tammoun town and Toubas. Despite an injunction issued by the Israeli High Court on 24 September preventing soldiers from evicting the community or carrying out further demolitions in the area, residents have been prohibited by Israeli soldiers from rebuilding their homes. According to local residents, aid transferred to the area has also been confiscated.

Al-Haq strongly condemns acts of demolition by the Israeli authorities, which displace communities and are in violation of international law. As the Occupying Power, Israel must adhere to its obligations under international humanitarian law, the Fourth Geneva Convention, which prohibits the destruction of property unless it is absolutely necessary for military operations. Furthermore, the forcible transfer of individuals or communities is prohibited under international humanitarian law. Both violations amount to grave breaches of the Fourth Geneva Convention and war crimes.