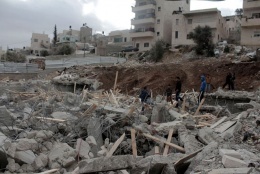 According to Al-Haq documentation, in the past ten years, 471 Palestinian houses and other structures have been demolished in Jerusalem affecting 1,634 Palestinians. On Tuesday 28 January, the Israeli authorities bulldozed two houses and a caravan in Beit Hanina and a residential structure and a building under construction in al-‘Eisawiya, both of which are located in East Jerusalem. The demolitions took place under the pretext that the owners had built without a permit.

In al-Ashqariyya, Beit Hanina, at approximately 8:00 am bulldozers owned by the Jerusalem municipality demolished two residential houses. According to Al-Haq’s field worker, one of the houses had been inhabited for three years by ‘Azzam Zayed Idris, his wife and six children. According to ‘Azzam’s wife, Fatina Idris, the house was demolished without any warning. Prior to the demolition, Israeli soldiers and agents raided the house and removed furniture. Fatina was prevented from entering her house and when she attempted to go inside one of the Israeli police officers violently pushed her.

Baha’ al-Din al-Dabi’ lives adjacent to the Idris family, along with his pregnant wife and their two children. According to Al-Haq’s field worker, the family has lived in the house for three years. Baha’ was arrested during the demolition process for attempting to resist the demolition.

In 2011, the Jerusalem municipality issued a fine of 180,000 shekels (approximately 50,870 USD) for both of the above mentioned houses due to them being built without a permit. Both families paid instalments of 2,426 shekels (approximately 685 USD) a month towards this fine, up until the day before the demolition.

A caravan belonging to Ibrahim al-Kiswani and used for furniture storage was also demolished in al-Ashqariyya on 28 January. Last year, Ibrahim, his wife, and their five children stayed in the caravan for approximately eight months after the Israeli authorities demolished their house. However, the caravan was only 45 metres squared and the family were eventually forced to rent a house in al-‘Eisawiya.

On 28 January, Israeli authorities demolished a 42-metre squared residential structure in al-‘Eisawiya, in al-Madares neighbourhood. Israeli forces demolished Hussein Ali Nasser’s home three years ago but the family rebuilt it a year later. The Israeli forces raided the structure without prior warning and demolished it.

On the same day at approximately 6:00 am, Israeli authorities demolished a residential building in al-‘Eisawiya belonging to Mohammad Ahmad Dari and his brother Abdel-Hayy Dari. Israeli soldiers, intelligence services and the Special Forces arrived at the scene and declared it a closed area, prohibiting anyone approaching the building. The building consisted of three stories and an underground parking lot. The area, in which the owners had built, along with the surrounding land in the Palestinian neighbourhoods, is designated as “green land” or “un-zoned land” by Israel, meaning that construction is prohibited. As a result, the owners, like many others in the area, did not apply for a building permit, as it would be impossible to obtain.

The housing situation remains tight for Palestinian Jerusalemites due to land access restrictions and discriminatory building policies. Obtaining a building permit exceeds the financial capabilities of the average East Jerusalem Palestinian resident. Moreover, the Jerusalem municipality only grants 50 to 100 building permits per year for Palestinians. Consequently, many Palestinians in East Jerusalem are forced to build homes for their families without the required Israeli building permits. Al-Haq condemns all demolition operations orchestrated by the Israeli authorities in violation of international law. Under international humanitarian law, destruction of property belonging to the occupied population is prohibited unless absolute military necessity dictates during military operations. Furthermore, the harsh conditions imposed on families facing housing demolitions may result in the forcible transfer of the community, which is a war crime and a grave breach of the Fourth Geneva Convention.