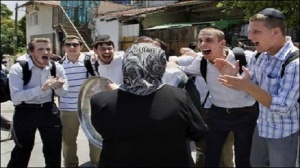 Following the disappearance and killing of three Israeli settlers in the West Bank on 30 June 2014, the Israeli government launched a campaign of collective punishment against Palestinians; first in the West Bank, and then in the Gaza Strip. In an act of vengeance, on the morning of 2 July 2014, Muhammad Hussein Abu Khdeir, 16, was abducted from a street near his home in East Jerusalem by three Israeli settlers. When his charred body was later found it was reported that he had been burned to death. Since these incidents, tensions between Palestinians and Israeli settlers in the West Bank and Israel have escalated. In the past week, Al-Haq documented the following three incidents of settler violence targeting Palestinians in Jerusalem.

On 28 July, at approximately 9:15 P.M., Reyad, 41, was walking home with his children, Isra’, 13, and Taha, 2, and his niece, Yasmin, 12. The group were walking from the French Hill area in Jerusalem towards Shu’fat. Isra’ and Yasmin were beside Reyad while Taha was a little in front of them. They walked on a grassy sidewalk some distance from the road. According to Reyad, it was clear that they are Arabs because the two girls, Yasmin and Isra’, cover their heads.

Suddenly, a settler passed by the family and spat on them. The settler then attempted to grab Taha by his head, almost managing to get hold of his hair. However, before the settler could touch the child, Reyad and the two girls screamed loudly and prevented him. At that point, the settler hurried away. Reyad picked Taha up and continued walking. They walked for approximately 30 metres before Reyad saw the settler again, by the Ma’ale Adumim settlement intersection. The settler was staring at them while talking on his cell phone. Reyad approached him and told him in Hebrew “What have you done? That is very low of you.” The settler immediately moved closer to Reyad and the children in a threatening manner, suggesting that he was prepared to fight the family. Afraid that the settler would beat him and the children, Reyad called for help from people on the street. Two Palestinian passengers stepping out of a nearby bus saw what was happening and came to help. When the settler saw them coming he immediately escaped and disappeared.

Reyad did not file a complaint at the Israeli police station as he believes it to be a pointless procedure. The next day, an officer from the al-Nabi Yacub settlement police station called Reyad and asked him to go to the police station for questioning about the incident. There he was questioned for approximately four hours. The police showed Reyad footage of parts of the incident taken from a surveillance camera near Ma’ale Adumim. It was then that Reyad saw that another settler had been present, but was hiding at the time. Reyad believes that the interference of the two Palestinians from the bus prevented the incident from escalating. (Al-Haq Affidavit No. 9783/2014)

On Friday 25 July, at approximately 10:30 P.M., Samer Mahfouth and Amir Shweiki, both 20, were walking from al-Nabi Yacub settlement back to their homes in Beit Hanina. When they reached the intersection between al-Nabi Yacub and Beit Hanina, they decided to sit on one of the benches on the street in al-Nabi Yacub to rest. While sitting there, an Israeli man approached them, asking them for a cigarette and a lighter in Hebrew. Samer responded in Hebrew, but with a distinguishable Arabic accent, that he did not have any. The man walked away and Samer saw him enter several different houses in the settlement. Ten minutes later, the man returned with a group of approximately 11 settlers. The settlers carried baseball bats, iron rods and pepper spray but held these objects on their rights hand side, out of Samer and Amir’s sight. Suddenly, the settlers attacked Samer and Amir, who were still sitting on the bench, beating them and spraying them with pepper spray. Samer and Amir were unable to resist the attack due to the fact that they had been taken by surprise and were significantly outnumbered. Samer recalls seeing Amir beaten with a baseball bat on the front of his head and he himself was beaten with a bat on the back of his head, causing him to fall to the ground, unable to move. Amir had already fallen to the ground by that point. The settlers continued to beat both of them using their equipment, hands and feet.

The attack lasted for approximately 10 minutes. Amir fell unconscious while Samer screamed and called for help. Eventually, some Palestinians from Beit Hanina arrived at the scene and the settlers immediately ran away. Samer was bleeding on the back of his head, and from his mouth and nose. Amir was unconscious and his face was bleeding. In addition, both of their bodies were bruised. The Palestinians took Samer and Amir in a private car to a medical centre in Beit Hanina, where they were provided with first aid. They were then transferred in an ambulance to al-Maqased al-Arabi Hospital in Jerusalem. There, Amir regained consciousness. They remained at al-Maqased al-Arabi Hospital for about an hour and were then transferred to Hadassah Ein Karem Hospital upon their request. Following medical checkups, blood spots were discovered on Samer’s brain.  He also suffered from a concussion but fortunately did not require surgery. He remained in hospital for five days. Amir underwent surgery twice due to severe internal bleeding and a fractured skull. On 30 July, Amir was still in the hospital.

The Israeli police visited Samer twice during his stay at the hospital to investigate the attack. On 29 July, an Israeli police investigator phone called Samer to inform him that surveillance camera footage shows that Samer lifted his hand first to attack the settlers. Samer believes that the police are trying to clear the settlers from any charges. (Al-Haq Affidavit No. 9784/2014)

On 31 July, at approximately 5:50 A.M., ‘Ali, 21, stepped out of the tram at the Der Yassin station (also known as Giva’t Sha’ul) in Jerusalem, in order to go to the bakery where he works. The street was quiet, with almost no cars or pedestrians. Around 150 metres away from the bakery, five or six people jumped over the wall of a nearby playground, and grabbed ‘Ali from behind, tying his hands behind his back with a rope. As ‘Ali turned his head around to see what was happening, they sprayed his eyes with pepper spray, blocking his vision and burning his eyes.

The group surrounded him, ripped off his shirt and put it in his mouth. They lifted him into the air and then dropped him to the ground on his back. ‘Ali was no longer able to move or resist due to the pain in his back and eyes. With his left eye, ‘Ali could see that the men attacking him were wearing kippas. He also heard them speaking in Hebrew. They punched and kicked ‘Ali. One of them put a cigarette out on ‘Ali’s left arm and then sprayed the burnt spot with pepper spray, causing him severe pain. They then sprayed his face and eyes with more pepper spray, causing him to choke. A short while later, ‘Ali heard one of them say to another “open the car boot” in Hebrew. ‘Ali knew then that they intended to kidnap him but he could not move or resist as he was still lying on his back with his hands tied and his mouth stuffed with his shirt. When the group approached ‘Ali to pick him up, he heard a car beep its horn. Immediately, the attackers escaped in their car.

‘Ali was left on the street in excruciating pain with no one to assist him. Meanwhile, ‘Ali’s co-worker at the bakery, ‘Ali Sarhan was heading to work and saw ‘Ali on the street. He assisted ‘Ali and called the other Arab workers in the area to help. He then drove ‘Ali to the Sha’are Zedeq Hospital in Jerusalem where he was admitted to the emergency room and underwent medical checkups. ‘Ali was released from hospital at approximately 11:30 A.M. the same day.

This is the second time that ‘Ali has been attacked by settlers. On the afternoon of 6 July 2014, while on his way back from work, settlers sprayed ‘Ali in the eyes with pepper spray and beat him on his right leg using a metal rod. At the time of the incident, Palestinian workers were present in the area and scared the settlers away. ‘Ali filed a complaint to the Israeli police following the incident. However, after the second assault, the police claimed that no previous complaints had been filed by ‘Ali.

According to ‘Ali, on 31 July 2014, another Palestinian co-worker was attacked by settlers on his way home. The man managed to escape and return to the bakery. (Al-Haq Affidavit No. 9785/2014)

Al-Haq is extremely concerned by the increase in settler attacks against the Palestinians in the Occupied Palestinian Territory (OPT). The presence of Israeli settlements and settlers in the OPT is illegal under international law. The Fourth Geneva Convention prohibits Israel, as the Occupying Power, from transferring parts of its civilian population into occupied territory. The violation of this provision constitutes a grave breach of the Geneva Conventions and as such is listed as a war crime under the Rome Statute of the International Criminal Court.

Israel’s illegal settlement policy is directly responsible for creating a hostile environment that puts civilians’ lives at risk. As an occupying power, Israel has a responsibility under both international humanitarian and human rights law to ensure the protection of the Palestinian civilian population under its control. However, the government of Israel consistently fails to effectively prosecute settlers who engage in criminal activity and hold them accountable; hence allowing settlers to enjoy institutionalised impunity in the OPT. Al-Haq urges the international community to take urgent and effective measures to ensure that Israel abides by its legal responsibilities to remove the illegal settlements in the OPT and to adequately protect the occupied Palestinian population.