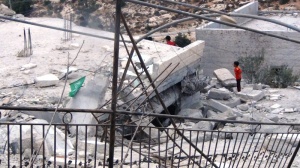 Israel has broadened its policy of collective punishment through the reimplementation of punitive house demolitions against Palestinians. Israel’s basis for punitive house demolitions is Regulation 119(1) of the Defense (emergency) Regulations of 1945 enacted during the British Mandate, which Israel incorporated into its law. Israeli authorities consider the regulation to remain ‘part and parcel’ of the penal law of the Occupied Territory.

Since 1967, some 48,000 Palestinian homes have been demolished.[1] Israel ended its punitive policy of house demolitions in 1998, but reinstated it after the outbreak of the second Palestinian Intifada in 2000. During the period of 2000-2005, Israel destroyed more than 650 Palestinian homes resulting in the displacement of more than 4,000 people. Israeli Occupying Forces (IOF) stopped using this measure in 2005 after a military committee found little evidence in the effectiveness of the policy. The policy was however used in 2009, when the homes of two Palestinians accused of killing an Israeli soldier were punitively demolished and sealed in East Jerusalem.

On 18 August 2014, the Israeli Occupying Forces demolished the houses of Amer Abu ‘Easheh and Hussam Qawasmeh, and irreversibly destroyed the apartment of Marwan Qawasmeh on the allegation that they were suspected of abducting and killing three Israeli settlers. During this time, neither Marwan Qawasmeh nor Amer Abu ‘Easheh were in custody, nor were they previously brought before a court to determine their guilt or innocence. Both were extra-judicially killed on 23 September 2014. Hussam has been detained since 11 July 2014 and has been brought before an Israeli military court, with charges of planning and financing the abduction of settlers. He has not been sentenced to date.

The HCJ ordered that any demolition or sealing of the house could not take place before 1 p.m. on 14 August 2014, in order for petitioners to submit appraisals by engineers on the demolition’s potential damage to adjacent properties. The appraisals were reviewed by the military.

The houses demolished and irreversibly destroyed in Hebron were:[2]

Israeli Occupying Forces arrived at the area at around 1:00 am on 18 August 2014, with units of the Engineering Corps of the Israeli Army as well as cement trucks for the house of Marwan Qawasmeh. The Engineering Corps planted the explosives at the houses of Hussam and Amer, and cement was poured into the apartment of Marwan. The IOF left at around 5:00 am. Thirteen individuals including nine children were left without homes after the operation.

On 19 November 2014, Israel demolished the home of Abdelrahman Al-Shaludi, 21, in the Al-Bustan neighborhood of Silwan in Occupied East Jerusalem. Al-Shaludi drove his car into a tram station, resulting in the killing of two Israelis on 22 October 2014. He was shot and killed immediately after the incident by the IOF.

Abdelrahman’s family, including his parents, two brothers and three sisters, live in an apartment in a five-story building. His extended family lives in the other apartments in the building. At around 1:00 am on 19 November 2014, the family was asleep when the IOF broke into and raided the apartment. The Israeli soldiers wore masks and pointed their guns at the family. Abdelrahman’s two sisters, Nibras, 12, and Raneem, 7, were terrified and started crying. The soldiers asked the members of the family to each carry his/her blanket and evacuate the apartment. Abdelrahman’s house was already emptied of furniture, as the family had received a demolition order a few days before.

All families living in the apartment complex were evacuated. The families waited for nearly three hours outside, where at about 4:00 am the apartment was destroyed with explosives. Two apartments in the same building and a car parked nearby were damaged by the explosion.  Abdelrahman’s parents and siblings are now living with relatives. Israel has barred them from returning to and rebuilding their home. (Al-Haq Affidavit 10167/2014).

An HCJ judgment, issued on 11 August 2014, in the case of the Hebron demolitions provides insight into Israel’s policy of punitive house demolition and the complicity of state institutions, including the judiciary, in supporting these illegal practices. The petition was filed by the families of the suspects and HaMoked.

In its judgment, the Court stated that the purpose of Regulation 119 was not to “punish terrorists or as a means for collective punishment of uninvolved parties”, and acknowledged that the demolitions “violate the rights of innocent parties” Including young children, which is “regretful”. The Court provided that the main principle underlying Regulation 119 is that authority should be exercised “proportionally”: house demolitions are justified as “proportionate” when balanced against the need to deter other Palestinians from carrying out attacks on Israel. The force used remains at the discretion of the Military Commander, without court interference.

The HCJ further rejected the claim that Regulation 119 was discriminatorily exercised based on the petitioners’ argument that the Military Commander did not issue an order for the demolition of the homes of the Israeli settler suspects who admitted to murdering Palestinian teenager Mohammed Abu Khdeir. The HCJ provided that “the comparison is not in place…in view of the fact that Regulation 119 has a deterring rather than a punitive purpose, the mere execution of hideous terror acts by Jews, such as the abduction and murder of the youth Mohammed Abu Khdeir, cannot justify, in and of itself, the application of the regulation against Jews”. While punitive house demolitions are illegal under international legal standards and should not be carried out against any part of the population, the HCJ’s parsing of standards in order to justify the policy’s use against Palestinians only is representative of broader discriminatory laws and policies that target Palestinians while fostering Israeli settler impunity.

Israel’s policy of punitive house demolitions amounts to collective punishment. The collective punishment of protected persons is absolutely prohibited under Article 33(1) of the Fourth Geneva Convention, including “[c]ollective penalties and likewise all measures of intimidation”.[3]  As noted above, even the Israeli High Court has acknowledged that such measures do in fact violate the rights of innocent people, although it notably refrained from stopping the military from enacting such measures. Moreover, international humanitarian law further prohibits the destruction of property belonging to the occupied population, unless required by military necessity. The “destruction and appropriation of property, not justified by military necessity and carried out unlawfully and wantonly”, is considered a grave breach of the Fourth Geneva Convention, and accordingly a war crime. War crimes may give rise to individual criminal responsibility of the Israeli soldiers and commanders responsible for the planning and executing house demolitions.

Israel’s policy of punitive house demolitions is also in breach of international human rights law. Three of the four suspects were killed by the IOF. None of the three was arrested, brought to trial or convicted. In the case of the suspects from Hebron, the Court argued that “the existence of administrative evidence [against suspects] is sufficient” to exercise the house demolitions and there is “no need to wait for the filing of an indictment or for a conviction”. These actions are a clear infringement on the suspects’ fundamental right to fair trial under Article 14 of the ICCPR, which protects individuals from the unlawful and arbitrary deprivation of other basic rights especially the right to life and liberty of person.

[3] Similar provisions to Article 33 are also found in Article 50 of the Hague Regulations which prohibits collective punishment for which the persons are not jointly and severally responsible.