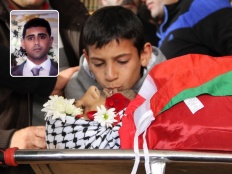 In 2014, Al-Haq documented the killing of 60 Palestinians in the West Bank, including East Jerusalem, 45 of whom were shot with live ammunition by the Israeli Occupying Forces (IOF). These examples demonstrate Israel’s disregard for the right to life of Palestinian civilians, and its policy of extrajudicial and arbitrary killing. In the early morning of 16 December, the IOF raided Qalandiyya refugee camp, north Jerusalem, to arrest Mujahed Hamad and Khalil Abu Jilda, both 25. In response, young Palestinians congregated on the roofs of the houses in the camp and threw stones at the Israeli soldiers who fired live ammunition intermittently.

Approximately an hour after the IOF raid began, Mahmoud Abdallah ‘Idwan, 21, was shot in the head as he was standing on the porch of his brother’s house talking to his cousin Haitham who was on a roof nearby.

At approximately 3:00 am, Haitham, 19, learnt from his friends that the Israeli forces had raided the camp. Haitham, along with some young men from the Al-Jabal neighbourhood, went to check what was going on. They saw the Israeli forces in Al-Lawayza and Al-Yasmeen neighbourhoods. Haitham recalls seeing the forces break into Mujahed Hamad’s and Munther Abu Jilda’s homes.

Haitham headed towards his uncle Abdallah ‘Idwan’s house in Al-Jabal neighbourhood along with 10 other young men. They went up to the roof and from there jumped to a neighbour’s roof to watch what was going on in Mujahed’s house, which is approximately 50 metres away. There were young men throwing stones on top of the roofs of neighbouring houses in the direction of the soldiers. Haitham recalls seeing some soldiers, approximately 20 metres away, who were standing on the corner of the street. The soldiers would turn their lights in his direction every once in a while, and would open heavy fire occasionally.

At approximately 4:00 am, Haitham went back to his uncle’s roof which cannot be seen by the soldiers on the street but could be seen by the soldiers who were on top of Mujahed’s roof. Haitham saw his cousin, Mahmoud ‘Idwan, standing nearby in his pyjamas on the 4th floor of the outdoor staircase adjoined to his brother, Omar’s house. Mahmoud asked Haitham where the gunfire was coming from. Mahmoud was worried as the bullets were hitting the walls of Omar‘s house. As Mahmoud and Haitham were talking, Haitham heard more gunfire and then saw Mahmoud fall to the ground. Mahmoud arrived to the Ramallah Hospital where he was pronounced dead at approximately 5:00 am. (Al-Haq Affidavit No. 10267/2014)

Mahmoud’s autopsy, performed at the Al-Quds University’s Institute of Forensic Medicine in Abu Dis, revealed that the ammunition used was a dum-dum expanding bullet. It entered Mahmoud’s left ear and exploded inside his head, leaving numerous pieces of shrapnel.

According to field information gathered by Al-Haq, those who were throwing stones from roofs were on a roof across from Mahmoud. The soldiers who opened fire at Mahmoud were approximately 60 metres away and standing on Mujahed’s roof opposite Mahmoud’s position.

Al-Haq condemns the killing of 21-year-old Mahmoud ‘Idwan who did not pose any threat to the IOF. Israel continues to arbitrarily execute and use excessive force against Palestinian civilians in the Occupied Palestinian Territory. As the Occupying Power, Israel must abide by its obligations under international human rights law (IHRL) and international humanitarian law (IHL). Accordingly, Article 27 of the Fourth Geneva Convention and Article 46 of the Hague Regulations ensure the respect of civilians’ lives and persons. The right to life is a fundamental human right and safeguarded under international human rights law, including Article 6 of the International Covenant on Civil and Political Rights (ICCPR) to which Israel is a party.

Law enforcement must be guided by the principles of necessity and proportionality when using force. According to Article 3 of the Code of Conduct for Law Enforcement Officials, the use of firearms is an extreme measure and every attempt should be made to exclude their use. According to witnesses, Palestinians in the area were unarmed and did not pose a lethal threat to the IOF. More specifically, Mahmoud was not throwing rocks and was a mere observer. The wilful killing of protected civilians is a grave breach of the Fourth Geneva Convention, and a war crime under the Rome Statute of the International Criminal Court.

Al-Haq condemns the killing of Mahmoud ‘Idwan and the IOF’s use of prohibited weapons against Palestinians. Al-Haq further urges Israeli authorities to carry out an immediate, transparent and impartial investigation to clarify the circumstances surrounding Mahmoud’s death and the use of weapons that are prohibited under Israeli and international law.