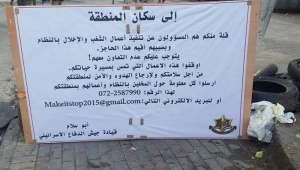 In April 2015, Al-Haq monitored and documented the closure of several Palestinian villages and neighbourhoods in occupied East Jerusalem as a form of collective punishment carried out by the Israeli authorities against Palestinians residing therein.

On 13 and 14 April, Israeli Occupying Forces (IOF) closed down the northern and southern entrance of Hizma, northeast of Jerusalem, with concrete blocks. A banner was set at the south-western entrance which read: "to the residents of the area: a few of you are responsible for disrupting public order by their acts of riots, and because of them this barrier was set up. You ought not cooperate with them. To guarantee your safety and restore public order to your area, send us any information related to those violating the system and their acts in your area". An email address and a phone number were provided.

On 13 April, the first day of the closure, the IOF allowed the residents to enter the village but not leave. A military checkpoint was set up at a bypass road at Hizma's southern entrance which  prohibited Palestinians from entering and exiting the town. There are approximately 7,000 Palestinians living in Hizma. The two-day closure imposed by the IOF harmed the economic life of the residents, most of whom make a living from shoppers that come from outside the village. The closure also resulted in severe traffic and required the residents to alternatively use dirt roads.

On the night of 13 April, Israeli forces removed the concrete blocks and set up two military checkpoints at the northern and southern entrance of Hizma and removed the previously set up checkpoint at the bypass road. The residents stated that the two checkpoints prohibited Palestinian cars from entering or exiting Hizma, but allowed for Palestinians to cross the checkpoint on foot.

On the night of 24 April, the IOF closed down the gate within the Annexation Wall set up on Palestinian lands in Al-Za'ayyem town, east of Jerusalem. This came following the killing of 17-year-old Muhammad Abu Ghannam at an Israeli checkpoint at the entrance of the town. This closure negatively affected 6,000 Palestinian Jerusalemites in Al-Za'ayyem. Those going into the town from Jerusalem had to take a longer route, turning a five-minute drive into one taking approximately half an hour. The gate remains closed today. 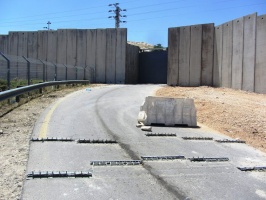 Farih Yousef Abu Lihya, 41, owns two hardware stores and a restaurant in Al-Za'ayyem. Since the imposed closure, his income has decreased by 80 per cent. (Al-Haq Affidavit No. 10640/2015) On Saturday 25 April at approximately 6:50 am, Hussam Hamza Sharbati, 49, sent his three children off to school and university. A short while later, they came back to the house and informed their father that the gate within the Annexation Wall had been closed down and they were unable to leave the town. Hussam went to the gate where he found many people, including tens of students and workers, frustrated and incapable of leaving the town for their schools and workplaces. Eventually, Hussam helped his children cross to the other side of the Annexation Wall on foot using a different route, after they were searched by Israeli soldiers. On the other side, they took a taxi that Hussam had ordered. Since the closure, Hussam has been spending 100 shekels per day on taxis to get his children to school as opposed to a total of 18 shekels per day that the three of them needed for transportation when the gate was open. The majority of students in Al-Za'ayyem attend schools in Al-Tur and elsewhere inside Jerusalem in order to meet their centre of life requirements as Jerusalem ID holders. (Al-Haq Affidavit No. 10639/2015)

In another incident, on 27 April, Israeli forces shut down Suleiman Al-Farsi Road in Al-Tur, east of Jerusalem, with concrete blocks. The closure came shortly after stones were thrown by some young Palestinians at Israeli soldiers at Al-Za'ayyem checkpoint following the killing of 17-year-old Muhammad Abu Ghannam. The aforementioned main road encompasses two schools, a pre-school, a cemetery, a mosque, a youth club, and includes 4,000 residents in the area. Furthermore, this is one of the connecting roads to Al-Maqased Hospital in Al-Tur.

On 29 April, Israeli forces prevented Palestinians from peacefully protesting the closure of Suleiman Al-Farsi Road. The forces fired sound canisters, and pushed and beat some of the participants in order to disperse the protest.

On the same day, 27 April, Israeli forces partially shut down the eastern entrance of Al-'Eisawiyya, east of Jerusalem, using concrete blocks. The area closed was one of the two main entrances to Al-'Eisawiyya. There are 18,000 Palestinians living in Al-'Eisawiyya, many of whom use that entrance on a daily basis, in addition to those coming into the town for work or other purposes. The closure caused heavy traffic within the town and hindered students and workers from getting to their schools and work outside the town.

The closures of the aforementioned Palestinian areas of Hizma, Al-Za'ayyem, Al-Tur and Al-'Eisawiyya amount to the recurring Israeli policy of collective punishment against Palestinians in East Jerusalem. The Fourth Geneva Convention strictly prohibits all forms of collective punishment and measures of intimidation against protected people. Furthermore, such closures obstruct Palestinians' freedom of movement, a  right which is upheld in the Universal Declaration of Human Rights and the International Covenant on Civil and Political Rights.

Similar to Palestinians elsewhere, Palestinian residents of Jerusalem are directly affected by Israel's mounting discriminatory policies against them. These policies include land appropriation, house demolitions, settler violence, settlement expansion, revocation of residency rights, denial of family reunification, lack of infrastructure, as well as limited access to education, health services, and recreational and cultural activities. These mentioned policies, among many others, are carried out and applied by the Israeli authorities in an attempt to allow for a demographic shift, where the city is drained of its Palestinian inhabitants while the Jewish Israeli population in Jerusalem is encouraged to increase.