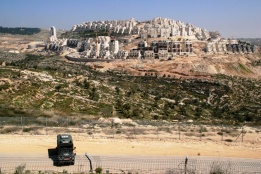 With at least 223 Israeli settlements, including government-sanctioned and unofficial settlement outposts, located in the West Bank, where more than 550,000 Israeli settlers reside - the majority of whom illegally reside in East Jerusalem - land annexation, and hence settlement expansion, is on the rise in the occupied West Bank. These settlements impede Palestinians' right to self-determination, restrict access to and sovereignty over their natural resources, including water, and restrict their movement, while dispossessing Palestinians of their land and causing their displacement. In addition, settlements foster an environment which allows for increased and direct settler violence against Palestinians. Since the beginning of January 2015, the Palestine Centre recorded a total of 152 settler assaults on Palestinians. These assaults target Palestinian civilians, including children, and vary between hit-and-run attacks, the use of gunfire, kidnapping attempts, attacks against places of worship, and destruction of Palestinian property.

Hebron, an occupied city in the southern West Bank which has seen a recent decline in the number of Palestinian inhabitants, is a hotspot for settler violence. According to the Oslo Accords, the city is divided into two areas, referred to as H-1 and H-2. The area referred to as H-1 is under Palestinian control while H-2 is under complete Israeli control. There are at least 35,000 Palestinians and more than 600 Israeli settlers residing in H-2. Settlers in this area are protected by approximately 2,000 Israeli soldiers, while Palestinian movement within the area is confined by Israeli checkpoints. There are two main factors that have led to a decline in Palestinian presence in the area: Israel's closure of main commercial and residential streets and businesses, leading to harsh and restrictive life conditions imposed on Palestinians; and the continuous harassment and assault of Palestinians by settlers in the area. The following two incidents of settler violence occurred on 9 May 2015 in Hebron and were documented by Al-Haq.

On 9 May 2015 at approximately 6:30 pm, Yasser Rajab Abu Markhiya, 44, was in a nearby grocery shop when he received a phone call from his wife who worriedly informed him that Israeli settlers were throwing stones at their house in Tal Al-Rumeida, Hebron. As he approached his house, Yasser saw seven Israeli settlers, aged 8-14 years old, throwing stones at his residence, hitting the windows and the door. An Israeli soldier was also present and attempted to stop the settlers' assault.

In addition to throwing stones, the settlers hurled tiles and bricks at the Abu Markhiya home. Yasser yelled at the settlers, demanding that they stop. Three of the older settlers pushed Yasser away from the house while the others continued to throw stones. Within a few minutes, six Israeli soldiers arrived at the scene and escorted the settlers away from the house without arresting any of them. The windows of the house did not break as Yasser had previously set up metal protectors around them to shield his family from the recurring settlers' attacks.

Ten minutes after the soldiers' dispersed the assailants, an outraged settler  approached Yasser, and accused him of attacking the settler children, who minutes before, were attacking Yasser's home. The settler also attempted to physically assault Yasser, despite the presence of an Israeli soldier between them. Minutes later, the settler was escorted away by Israeli soldiers.

Shortly after being escorted away from Yasser's home, the same group of settler children stood in front of Yasser's neighbour's, Mazen Qa'qur, house, approximately 20 metres away, and attempted to break in. Mazen's wife stood at the front door and stopped them from entering, while the Israeli soldiers stood by idly without intervening.

A few minutes later, the settlers moved toward the neighbourhood's main street. Another young settler joined the group and attacked a 17-year-old Palestinian resident of the neighbourhood. The boy's mother, Madeline Abu Shamsieh, was recording the incident on camera as settlers tried to stop her, striking her arm and punching her in the back. Madeline retreated to her home to escape, while the settlers continued to attack her.

Yasser recorded the incidents on camera to the best of his ability, despite settlers' attempts to stop him from filming. At approximately 7:20 pm, Yasser left his home for the mosque, and settlers were still congregating on the street and terrorizing the Palestinian residents in the neighbourhood. (Al-Haq Affidavit No. 10667/2015)

On the same day, at around 7:00 pm, Mervat Sa'adi Abu Rmeila, 34, along with her four children, headed to the market in Tal Al-Rumeida, to buy groceries. When she was approximately 100 metres away from her house, four young settlers approached her.  One of the settlers threw water at Mervat and her children from a cup in which he had had spat, while the other settlers spat at them and beat them. One of Mervat's neighbours witnessed the attack and called on the Israeli soldiers at the nearby Gilbert checkpoint.

Eight soldiers arrived and stood between Mervat's family and the settlers. Mervat attempted to continue walking toward the store, but one of the soldiers screamed at her and ordered her to stop. Mervat's neighbour explained that the settlers incited the attack, not Mervat and her children. Upon hearing this, the soldier allowed Mervat to continue on her way.

Mervat walked toward the northern entrance of Al-Shuhada Street, stopping at the Gilbert checkpoint, which is on her way to the city centre and the market. The same settlers followed her to the checkpoint, but the soldiers prevented them from attacking. Approximately half an hour later, Mervat approached the Gilbert checkpoint on her way home, only to find around 30 settlers gathered there, including the settlers who attacked her and her children, along with tens of soldiers. The settlers stood in Mervat's way, prohibiting her from reaching her house while an older settler kicked her in the right leg. The Israeli soldiers did not react.

Mervat's children managed to escape to a neighbour's house, while Mervat called her husband, who arrived shortly thereafter. Mervat, her husband and her in-laws attempted to reach her home, but the settlers prevented them, and the soldiers told them  that they were prohibited from reaching their home. An hour later, the family was permitted to return to their home, accompanied by the Israeli police. The next morning, Mervat's children aged 10, 9, 8 and 4, were too terrified to leave their home and go to school. (Al-Haq Affidavit No. 10662/2015)

The presence of settlements and settlers in the West Bank constitutes a grave breach of the Fourth Geneva Convention, and amounts to war crime under the Rome Statute of the International Criminal Court. The Fourth Geneva Convention prohibits the Occupying Power from transferring parts of its civilian population into occupied territory. Contrary to its obligations under international law, Israel continues to expropriate Palestinian land while further expanding settlements in Occupied Palestine.

Incidents of settler violence and the impunity granted by Israel to settlers continue to deprive Palestinians of their right to self-determination, including the principle of sovereignty over land and natural resources. As seen above, settlers deprive Palestinians freedom of movement and from accessing their own property. As an Occupying Power, Israel has an obligation under international humanitarian and human rights law to safeguard the rights of civilians in occupied territory, including their access to private and public property. Furthermore, the International Covenant on Civil and Political Rights recognizes the inherent dignity of the human person.

Al-Haq expresses its grave concern at the incidents of settler violence and the 'Price Tag' policy carried out against Palestinian civilians and their property, and the lack of effective accountability and protection from such acts by Israel. As embodied in several UN statements and reports, Israel has to ensure prompt, thorough, independent and impartial investigations into incidents of violence perpetrated by private actors against Palestinians and their property.