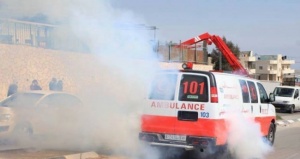 In October 2015, the Palestine Red Crescent Society (PRCS) documented 228 Israeli violations against medical staff, including 56 incidents where ambulances were delayed, 116 cases of assaults against medical staff, as well as 56 incidents where ambulances were attacked by the Israeli Occupying Forces (IOF). These incidents are documented as Israel continues to escalate its violence against Palestinians in the Occupied Palestinian Territory (OPT), including against Palestinian medical staff and health facilities. These attacks include: raiding hospitals and arresting patients; holding up and detaining ambulances transferring patients; directly shooting rubber and live bullets at ambulances; physically beating ambulance medical staff; setting up checkpoints near hospitals and restricting access; and prohibiting ambulances from reaching patients. As a result, dozens of medical volunteers have been injured. Once again, such attacks illustrate Israel's policy of disproportionate indiscriminate and excessive use of force against Palestinians, including paramedics and health facilities.

Throughout October 2015, the IOF has repeatedly broke into Al-Makased Hospital, in Al-Tur, Jerusalem. The raids were carried out to arrest some of the Palestinian patients at the hospital and to confiscate medical reports of others detained. On Wednesday 28 October 2015, the IOF raided the hospital, looking for a detained patient's medical file. While at the hospital, the IOF confiscated the hospital's computer which holds footage from the surveillance cameras. The IOF also registered the names and phone numbers of several staff members at the hospital and threatened to summon them for interrogations. A day before, the IOF had interrogated at least one resident doctor.

Sa'id Abdallah Bisher, 34, is a paramedic officer at the PRCS. On 11 October at approximately 7:00 pm he and his colleague, Ra'ed Al-Hotari, headed to Qalandia checkpoint after it was reported to them that confrontations had erupted between the IOF and Palestinian youth. The IOF were shooting tear gas, sound canisters and rubber bullets at the youth who were throwing stones at them. Another PRCS was at the scene near the checkpoint. At around 8:30 pm, the IOF fired bullets at Sa'id's ambulance. As a result, the window on the right was shattered and some of the equipment inside was damaged. Another PRCS ambulance was also hit and its window was shattered. Sa'id confirms that a rubber bullet, which he saw inside the ambulance, hit the ambulance that he was in. He also confirms that no stones were being thrown at the time the ambulances were hit. (Al-Haq affidavit no. 11081/2015)

On 18 October at around noon, 50-year-old Ayman Ghaleb Kort, a paramedic, was in an ambulance headed to Al-Balu' neighbourhood in Al-Bireh. Ayman was going to provide medical assistance to those injured during the confrontations that erupted between Palestinian youth and the IOF. The IOF used tear gas, rubber bullets and, occasionally, live bullets against the Palestinians protestors. At approximately 4:00 pm, Ayman and his colleaue, Fadi, saw an injured man fall to the ground. They headed toward him  immediately to provide medical aid. Several soldiers and two military jeeps moved toward Ayman and Fadi. The IOF prevented Ayman from treating the injured man and arrested him while he was bleeding from his side. Each time Ayman tried to talk to the soldiers, they would kick him and fire sound canisters at his feet. An officer threatened to shoot Ayman and Fadi if they did not step back. (Al-Haq affidavit no. 11114/2015)

On Friday 30 October, Karim Mahmoud Taha, a 36-year-old paramedic, was in Al-Balu', with two volunteer paramedics to provide medical aid as confrontations had erupted. At approximately 2:00 pm, Karim saw three Israeli jeeps on the street, one of which had caught on fire. Then he saw several young men running as one soldier ran after them. Karim approached the young men as the Israeli jeep drove quickly towards one young man in particular. The young man fell to the ground and then a soldier struck him on the head with his rifle and kicked him. Footage of the incident can be seen here:

Karim tried to provide him with medical assistance but the IOF prohibited him and other paramedics from doing so. Instead, the footage shows soldiers violently pushing Karim and other paramedics away. The paramedics were pepper sprayed and a sound canister was thrown in their direction. While soldiers were pushing Palestinian paramedics away, another soldier is seen kicking the ailing young man. Israeli soldiers obstructed medical assistance and instead arrested the young man. A few paramedics were injured as a result of the tear gas. (Al-Haq affidavit no. 11113/2015)

Israel's targeting of health facilities constitutes a blatant violation of international humanitarian law, particularly the Fourth Geneva Convention of 1949 on the protection of civilians in time of war. Article 18 of the Fourth Geneva Convention states that civilian hospitals may not be the object of attack and must be protected and respected under all circumstances. In addition, Convention (IV) relative to the Protection of Civilian Persons in Time of War of 1949, states that recognized National Red Cross Societies, Red Crescent for example, should be allowed to continue their humanitarian activities. By targeting hospitals and health facilities, Israel constitutes a serious violation under international humanitarian law. Furthermore, property and personnel distinctively marked as medical or health facility must not be targeted as per Article 5(2) of the Hague Convention IX.