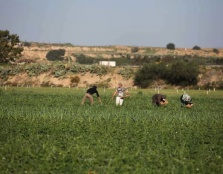 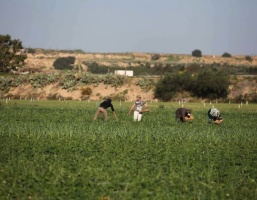 Israeli attacks against Palestinian civilians in the buffer zone often result in injuriesm at instances amounting to death. On 22 February 2016 at approximately 5:00 pm, the Israeli Occupying Forces (IOF) opened fire at 'Izz Addin Al-Basbous, 26, who was near the border fence in the buffer zone area in east Gaza. 'Izz was injured in the right leg and was then detained by the IOF until 11:00 pm of that day. After shooting him, the IOF attacked him viciously with a police dog. The dog bit 'Izz's leg, back and shoulders and tore his clothes - all while the Israeli soldiers laughed. Further, 'Izz was beaten during interrogations. Six days later, on 28 February, the IOF again opened fire at Palestinian farmers while planting watermelon on their land in east Khan Younes, approximately 800 metres away from the buffer zone. The shooting resulted in injuring one of the farmers, Ramah Ismail Al-Farra, 26, in his right leg.

On Sunday 13 March at approximately 8:00 am, Jamal Wa'el Zuweid, 19, was in the buffer zone east of Al-Shuja'iyyah with 53-year-old Waleed Huweiti to collect metal junk that they sell in order to provide for their families. As they were collecting and loading the junk into their cart, approximately 30 metres away from the border fence, Jamal was shot with four bullets by the IOF. Once he heard the gun shots, he was frightened and hid in the cart. The shooting continued towards him from one of the watchtowers along the border. As a result, Jamal was injured in both legs, his stomach and left arm. He was bleeding for about 15 minutes before someone could reach him and take him to hospital. (Al-Haq affidavit no. 190/2016)

The recurring attacks against Palestinian civilians in the buffer zone, whether at land or sea, constitute a blatant violation of Israel's obligations under international law. As an Occupying Power, Israel must abide by international human rights law, refrain from exerting excessive use of force, and provide protection for the civilian population in occupied territory. Al-Haq calls on Israel to carry out immediate, transparent and impartial investigations into all incidents in which Palestinian civilians have been killed or injured. Al-Haq reiterates that the closure of the Gaza Strip amounts to collective punishment against the Palestinian civilian population in clear violation of international humanitarian law.