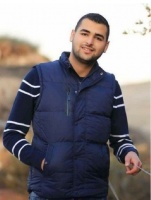 According to Al-Haq’s documentation,[5] Omar was standing in front of the Student Council building at the University talking to a university student when four men dressed in civilian clothing approached him. One of the men wore a formal jacket and glasses, and carried a laptop bag. Another man wore a red shirt and held a microphone in his hand. The two men approached Omar asking him for an interview, claiming they were media personnel. Omar declined the interview, on the basis that he is no longer the president of the Student Council. As the two men, who spoke fluent Arabic with a Palestinian accent, chatted with Omar, the other two men circled around them, putting Omar in the middle. They were accompanied by a fifth man who sat by an ATM machine nearby and who grabbed and tackled Omar from the chest shortly thereafter. The five men started beating Omar and used a taser aiming it at his legs and hands. Omar tried to protect himself by covering his head.

The five agents then threatened students nearby by pointing their guns at them, verbally assaulting them, and shooting in the air. Some students started throwing stones while others dispersed. It was relatively calm at the time given that most students had finished classes and were heading home. At the University’s western entrance, seven IOF soldiers made their way towards Omar’s location. By that time, Omar was being led by the five agents towards the western entrance and outside the University, under the protection of the IOF soldiers. The soldiers shot rubber bullets at the students. They put Omar in a green Palestinian-licensed Volkswagen shuttle and left the University premises. Two students and one member of faculty were injured by the bullets shot during the operation.

Under international humanitarian law, universities must be protected and their continuation must be ensured by the Occupying Power.[6] However, the IOF systematically attacks and raids universities and schools,[7] harasses and arrests students and staff. Currently, there are 60 students from Birzeit University detained by the IOF, some of whom are held under administrative detention.[8] In addition, the IOF’s continuous attacks against Palestinian universities and students directly impedes on the latter’s right to education, as provided for in Article 26 of the Universal Declaration of Human Rights and Article 13 of the International Covenant on Economic, Social and Cultural Rights (ICESR).[9] The right to education is also enshrined in the UNESCO Convention against Discrimination in Education, and the International Convention on the Elimination of All Forms of Racial Discrimination.[10]

Al-Haq reminds Israel of its obligations under Article 9 of the International Covenant on Civil and Political Rights that “no one shall be subjected to arbitrary arrest or detention”, and condemns the arbitrary arrest of Omar al-Kiswani, without grounds. In this vein, Al-Haq warns that the mass arrests and administrative detentions orchestrated by Israel may amount to “imprisonment or other severe deprivation of physical liberty in violation of fundamental rules of international law” and when carried out as an act which is “committed as part of a widespread or systematic attack directed against any civilian population, with knowledge of the attack”, may amount to a crime against humanity.[11] Furthermore, Israeli undercover agents and soldiers, often used to carry out activities, such as raids, arrests, killings,[12] pose serious and increased threat against the protected civilian population and property.

Al-Haq calls on the Prosecutor of the International Criminal Court (ICC) to hold Israel accountable for crimes committed against Palestinian civilians, aiming to deprive them off their guaranteed rights. Al-Haq further supports the call to criminalize attacks on schools as war crimes in accordance with the Rome Statute of the International Criminal Court and prosecute offenders accordingly, as a matter of course, routinely and systematically.[13]