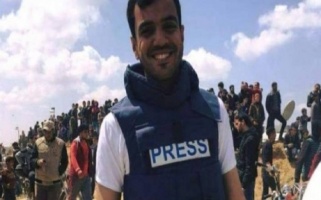 Since the beginning of the “Great Return March” on 30 Friday 2018 in the Gaza Strip, and as of 12 April 2018, 32 Palestinians have been killed by the Israeli Occupying Forces (IOF), 25 of whom during demonstrations, and over two thousand injured, hundreds with live ammunition. Journalists and media professionals have been also the subject of the IOF’s excessive use of force and lethal weapons, including live ammunition, metal-coated rubber bullets and excessive tear gas. As a result, one Palestinian journalist was killed, who was fully recognizable as a professional journalist, dressed in his protection gear with the word “PRESS” clearly visible on it. Al-Haq further documented the injury of several other journalists since 30 March.[1] The Palestinian Centre for Development and Media Freedom (Mada) has documented 32 injuries among journalists covering protests in Gaza between 30 March and 6 April 2018, 11 of whom shot with live ammunition by the IOF.

On Friday 6 April, Yasser Abd Al-Rahman Murtaja, 31, a Palestinian photojournalist for Eye Media, was covering the protests east of khuza'a, east of khan Younis. Yasser, who was dressed in a distinctive journalists’ outfit, including the blue vest with “PRESS” written on it and a blue helmet, was shot in the abdomen with a bullet by the IOF while covering the protests. At about 1:30 pm that day, Shadi Jaber Al-‘Assar, 35, also a photojournalist, who was about 150 metres from the fence, spotted Yasser at the location, approximately 20 metres away from him. Shadi recalls:

I was taking a live-streamed video on Facebook during which I saw tens of tear gas canisters fall in the area. While I was filming the video, I heard three bullets and the buzz of a bullet near me. Less than two minutes later, I heard protestors yelling “ambulance” and asking for an ambulance stretcher to carry the injured person. I stopped filming the video from my cell-phone and started preparing to take pictures on the camera as they brought in the injured person through the smoke. I then saw a group of young men carrying an injured person on an ambulance stretcher. I hurriedly rushed there and was shocked to see that the injured was wearing a “PRESS” vest. When I got there, I realized it was my colleague Yasser Murtaja. I immediately stopped taking pictures, put the camera around my neck and helped carry him… I saw cotton and white gauze on his upper abdomen from the left side. I also saw pain in Yasser’s face as he was pressing his teeth and he firmly held to my jacket. I spoke to him to reassure him but he could not speak to me. I asked the paramedic to remove the gauze and I saw a small hole and a little blood around it. We carried Yasser for about 100 metres until we reached the ambulance that was parked on Jakar Street, approximately 250 metres away from the border fence.

Yasser was transferred to hospital and underwent surgery. Yasser was declared dead at approximately 1:20 am on Saturday 7 April. (Al-Haq Affidavit No. 142ISR/2018)

On Friday 6 April at approximately 11:30 am, ‘Ezz Abd Al-Aziz Abu Shanab, 33, chief editor at Sky Press news agency, was in east of Al-Zaytoun neighbourhood, east of Gaza city, to cover the protests. He spent a few hours in the area, taking photos, all while wearing the blue “PRESS” vest, a helmet, and carrying his camera. At approximately 5:30 pm, while about 500 metres away from the fence, ‘Ezz was shot with a bullet in his left foot. He was transferred to Al-Shifa Hospital, where doctors told him he had a fracture and underwent an operation. (Al-Haq Affidavit No. 178ISR/2018)

On 6 April at approximately 4:30 pm, Adham Khaled Al-Hajjar, 32, a journalist, was shot in his left-knee while he was taking pictures of the protests taking place near the buffer-zone in Malka, east of Al-Zaytoun neighbourhood in Gaza city. At the time, Adham was wearing a clearly marked PRESS vest and carrying his camera. Adham was transferred to Al-Shifa Hospital where he was still receiving medical treatment at the time of writing. The doctors told him that the injury he sustained from the bullet resulted in a fracture in the knee and a cut into the nerve. (Al-Haq Affidavit No. 179ISR/2018) 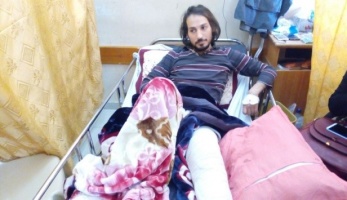 Ahmad Salem Barbakh, 22, a freelance photographer, covered the demonstrations on 30 March in the buffer-zone area east of Khuza’a, east of Khan Younis. Ahmad was wearing a blue bulletproof vest with “PRESS” written on it and carrying a camera. Ahmad stood in Jakar Street, approximately 200-300 metres away from the fence, where ambulances were also standing by. Ahmad took photos as thousands of protestors of all groups arrived following the Friday prayers to the area. As the protestors were peacefully protesting, some of them approached the fence from about 50-70 metre distance and started throwing stones at the soldiers positioned behind the fence. Tyres were set on fire, while other protestors carried Palestinian flags. On the other side of the fence, tens of soldiers were located behind earth mounds and several military jeeps were positioned nearby. Ahmad recalls seeing some of the soldiers on the ground in a sniper position, behind the earth mounds, pointing at the protestors. Ahmad could hear gunshots being fired every five minutes and see protestors getting shot – all during which he would take pictures of the protestors. At approximately 2:20 pm, while Ahmad was still taking pictures, approximately 250 metres from the fence, he was shot in the abdomen. He was transferred to the Nasser Hospital Center. There, the doctors determined that he had sustained an injury to the small intestine, from a live bullet to the abdomen. Ahmad underwent surgery for several hours during which 30 cm of his intestines were removed, along with the bullet shrapnel. (Al-Haq Affidavit No. 143ISR/2018)

The IOF has engaged in unnecessary, disproportionate force and lethal force against peaceful demonstrators and professional journalists documenting and reporting the ‘Great Return March’, in Gaza. Journalists include and are defined as “covering all media.”[2]

The documentation collected by Al-Haq reveals that Israel has deliberately targeted attacks against journalists, who were distinctively dressed and clearly identifiable as journalists. Critically, international law specifically protects journalists as civilians. Article 79(1) of the First Additional Protocol to the Geneva Conventions, provides that “journalists engaged in dangerous professional missions in areas of armed conflict shall be considered as civilians.” Additionally, Rule 34 of the ICRC Study on the customary rules of International Humanitarian Law further requires that “civilian journalists engaged in professional missions in areas of armed conflict must be respected and protected as long as they are not taking a direct part in hostilities.” This protection is echoed in UN Security Council Resolution 1738 (2006) and UN Security Council Resolution 2222 (2015) on the protection of journalists and media professionals in armed conflicts. [3]

If there is any doubt as to the character of journalists as civilians, they are always accorded civilian status under international humanitarian law.[4] Yasser Abd Al-Rahman Murtaja was wearing the distinctive journalists’ blue vest with “PRESS” written on it and a blue helmet, and was filming a video, when he was shot in the torso. Ezz Abd Al-Aziz Abu Shanab was wearing the blue “PRESS” vest, a helmet, and carrying his camera, and was shot while taking photographs. Adham Khaled Al-Hajjar was taking pictures of the protests wearing a clearly marked PRESS vest and carrying his camera. Ahmad Salem Barbakh was wearing a blue bulletproof vest with “PRESS” written on it and carrying a camera and was shot with a live bullet to the torso while talking photographs. There was no doubt as to the civilian and journalist identity of the men.

Israel as belligerent occupant is obliged to guarantee the right to life of protected persons, including journalists, in the Gaza Strip.  In doing so, Israel must apply the law enforcement legal framework, including the Basic Principles on the Use of Force and Firearms by Law Enforcement Officials and the Code of Conduct for Law Enforcement Officials, to ensure that lethal force is not employed unless in the limited and exceptional circumstances where it is “strictly unavoidable in order to protect life.”[5] In this vein, Israel is constrained by Article 6 of the International Covenant on Civil and Political Rights (ICCPR) to ensure that “no one shall be arbitrarily deprived of his life”, a right from which no derogation is permitted.[6] The killing of Yasser Abd Al-Rahman Murtaja, who was approximately 130 meters away from the first fence, an unarmed civilian who was carrying out his work as a photojournalist, was not necessary to protect life and amounts to a gross, disproportionate and excessive use of force by Israel. Further, the injury of journalists from Israel’s unnecessary, disproportionate and excessive use of force violates the rights to life, health, freedom of expression and freedom of assembly. Notably, intentional attacks against the civilian population is a war crime and is prosecutable under Article 8(2)(b)(i) of the Rome Statute of the International Criminal Court.

It is also evident that Israel specifically targeted journalists following a shoot to kill policy. On March 30 and 31, the IOF announced that it was “prepared to respond to violent riots” with a “reinforcement of troops.”[7] Later, the IOF deleted a tweet admitting that it “arrived prepared and with precise reinforcements. Nothing was carried out uncontrolled; everything was accurate and measured, and we know where every bullet landed.”[8] Israel’s Minister for Defense has echoed this position, indicating that Israel does not employ the principle of distinction to protect civilians who peacefully protest in Gaza, stating “you have to understand, there are no innocent people in the Gaza Strip, everyone has a connection to Hamas, everyone receives a salary from Hamas.”[9]

The deliberate targeting of journalists carrying out their work is an intentional measure to silence media coverage and circumvent the media documentation of Israeli crimes against the Palestinian people. Journalists have an important role as documenters of evidence, for use in international tribunals and courts.[10] Moreover, the attacks and silencing of journalists represent a violation of Article 19 of the Universal Declaration on Human Rights (UDHR) which finds that “everyone has the right to freedom of opinion and expression; this right includes freedom to hold opinions without interference and to seek, receive and impart information and ideas through any media and regardless of frontiers.” According to Article 19 of the ICCPR, the right also includes “freedom to seek, receive and impart information and ideas of all kinds, regardless of frontiers, either orally, in writing or in print, in the form of art, or through any other media of his choice.”[11] It is particularly significant that Israel has targeted Palestinian journalists given the ongoing preliminary examination into the situation in the occupied Palestinian territory at the International Criminal Court.

[2] Recommendation No (96) 4, Committee of Ministers to Member States on the protection of journalists in situations of conflict and tension, adopted on 3 May 1996, available at: https://www.coe.int/en/web/freedom-expression/committee-of-ministers-adopted-texts/-/asset_publisher/aDXmrol0vvsU/content/recommendation-no-r-96-4-of-the-committee-of-ministers-to-member-states-on-the-protection-of-journalists-in-situations-of-conflict-and-tension?_101_INSTANCE_aDXmrol0vvsU_viewMode=view/#{%2216456416%22:[0]}

[10] See discussion of Karadzic in Christoph Safferling ‘International Criminal Procedure’ (OUP 2012) ii. In Karadzic, a number of journalists were called as witnesses.