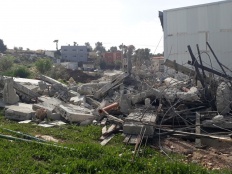 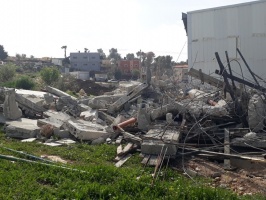 The Israeli occupying authorities and forces have systematically confiscated and demolished public and private Palestinian property since the beginning of the occupation in 1967. Over the past five decades, Israel has appropriated and confiscated hundreds of thousands of dunums of Palestinian land in the Occupied Palestinian Territory (OPT), including through the construction of the Annexation Wall, the confiscation of land for military use, nature reserves and the appropriation of Palestinian land as Israeli “state land”.[1] The aim has been to attain the maximum amount of land, while ensuring minimal Palestinian presence. Meanwhile, Israel continues to demolish and destroy Palestinian private property, including homes, agricultural structures and animal sheds, primarily in East Jerusalem and Area C of the OPT. In January[2] and February[3] of 2019, alone, Israel demolished 45 Palestinian owned structures. In the last week of February 2019 for example, a private structure used for agricultural purposes in Qalqiliya was demolished, while 400 olive and almond trees were uprooted and confiscated in Jenin.

On 25 February 2019, at approximately 7:00 am, eight Israeli military jeeps, accompanying two JCB bulldozers and members from the Israeli Civil Administration, arrived at Ibrahim Omar Amarneh’s land, situated on the eastern side of Barta’a, an isolated village behind the Annexation Wall, located south of Jenin. Without any previous warning or notice, they began levelling Ibrahim’s land, uprooting 300 olive trees and 100 almond trees. Ibrahim had planted the trees three years ago and has been regularly cultivating the land to avoid its appropriation by the Israeli authorities.[4]

Ibrahim attempted to object to the uprooting of his trees by telling one of the officers from the Israeli Civil Administration that he was in the possession of documents proving land ownership. However, the officer responded by saying that the land had been identified for confiscation, despite the fact that Ibrahim had not received any confiscation order. Ibrahim later learnt that one of the residents of Barta’a had found two confiscation orders, dated 6 November 2018, ordering Ibrahim to evacuate the land, trees and other plants – which the resident had forgotten to deliver to Ibrahim.

The uprooting and levelling operation finished at 1:00 pm on the same day, when the Israeli vehicles drove away, after having confiscated all of the 400 trees, an act amounting to pillage. It should be noted that Ibrahim had bought the land, about 25 dunums of agricultural land, from which the trees were uprooted and confiscated, about five years ago from his paternal uncles. The land, designated as Area C, is registered in the Jordanian registry and Ibrahim’s uncles possess ownership papers. Ibrahim had not yet transferred the registration and ownership of the land to himself since he had bought the land and it remains registered in his uncles’ names. Following the uprooting and confiscation on 25 February 2019, Ibrahim hired a lawyer to confirm his ownership of the land to the Israeli Civil Administration.[5]

2. Demolition of a Structure, Manatir, Qalqiliya

In August 2018, Hussein ‘Ashour Salim constructed a structure to be used for agricultural purposes on his land, located in the Manatir area, north-east of the village of Nabi Elias, east of Qalqiliya. On 25 February 2019, at approximately 10:30 am, about 40 Israeli soldiers, accompanying military jeeps, jeeps from the Israeli Civil Administration and a Hyundai bulldozer, arrived at Hussein’s land and bulldozed his structure. At the time, the Israeli forces prevented Hussein from accessing his land. From a distance of about 100 metres, Hussein watched the demolition of the 80-square-metre structure, consisting of a kitchen, bathroom, hall and a balcony, built of bricks and stones, about three metres in height, covered with metal zinc from above.[6] The soldiers removed all of Hussein’s belongings from the property and proceeded with the demolition, during which 10 olive and citrus trees were damaged and uprooted.

It should be noted that on 14 November 2018, Hussein had received a stop construction order for the agricultural structure under the pretext that the structure was built without license and “contrary to the planning of the site” in accordance with Article 38(1)T(3) of the Building Planning Law (No. 79 of 1966). Hussein challenged the military order in Beit El Military Court in Ramallah and submitted the necessary documents on 3 January 2019, but received a demolition order thereafter.[7]

The confiscation and destruction of Hussein and Ibrahim’s property violate provisions of international humanitarian and human rights law. In accordance with international humanitarian law, the destruction of property, uprooting and confiscation of trees violates Articles 23(g) and 46 of the Hague Regulations (1907), which are also constitutive of customary international law. Article 23(g) prohibits the destruction and seizure of property, whether public or private, unless it is “imperatively demanded by war”,[8] whereas Article 46 explicitly provides that private property cannot be confiscated. The cases provided above also constitute a breach of Article 53 of the Fourth Geneva Convention prohibiting destruction of property.[9] However, Israel, the Occupying Power in the OPT, has denied the de jure applicability of the Fourth Geneva Convention in the OPT, holding that it would only abide by the “humanitarian provisions”, which it has not defined.[10]

Under international human rights law, the destruction and confiscation of Palestinian private property violates Article 17 of the Universal Declaration of Human Rights (UDHR), which affirms the right to own property which “no one shall be arbitrarily deprived of”.[11] In addition, it also constitutes a violation of Article 11(2)(a) of the International Covenant on Economic, Social and Cultural Rights (ICESCR) which affirms everyone’s right to an adequate standard of living, including “developing or reforming agrarian systems in such a way as to achieve the most efficient development and utilization of natural resources”.[12] In the cases presented above, Ibrahim has been prevented from doing so through the uprooting and confiscation of his trees and the levelling of his land. Furthermore, Article 1 of the ICESCR states that “all peoples have the right of self-determination”, which encompasses permanent sovereignty over natural resources, including land. Notably, land is of critical importance to Palestinians as a source of livelihood and an integral part of Palestinian identity as well as culture. In this regard, the destruction thereof also amounts to a violation of Article 6 of the ICESCR which recognises “the right to work”, and Article 15(a) which recognises the right of everyone “to take part in cultural life”. The interdependency between economic assets and human development cannot be ignored in such cases. The families and individuals affected in the above mentioned cases have had their property damaged and therefore their livelihood hindered. This restricts their opportunities because economic assets are a pathway to, amongst other rights, education, health, adequate nourishment and living standards. These are all capabilities which should be upheld to ensure the individual’s self-realization and dignity as listed in General Comment No. 36 (2018) on Article 6 of the International Covenant on Civil and Political Rights (ICCPR) on the right to life.

[3] Al-Haq, “Israeli occupation forces escalate their attacks on children and accelerate the pace of demolition in occupied Jerusalem”, available in Arabic at: http://www.alhaq.org/arabic/index.php?option=com_content&view=article&id=980:-qq-&catid=93:2013-10-08-08-32-26&Itemid=233

[6] The agricultural structure is used by Hussein to store material needed for farming. During weekends, or whenever he visits the land, Hussein stays there.

[9] Article 53, Geneva Convention relative to the Protection of Civilian Persons in Time of War (1949)