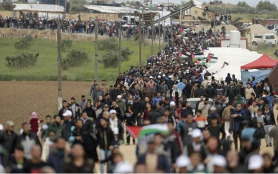 Since then, the 30th of March has been marked as Land Day, a central date in the Palestinian collective memory. The memory of the 1976 land dispossessions and the brutality of the Israeli response to Palestinian resistance echoes the Palestinian reality before and after that date. Since the inauguration of the Zionist settler-colonial project about a century ago, the Palestinian people have endured and resisted a ruthless project that aims at dominating the whole land of historic Palestine with the least Palestinian indigenous population as possible.

Before 1976, controlling Palestinian land with the least Palestinian people took the form of the mass forcible displacement and dispossession of 85 per cent of the indigenous Palestinian people during the Nakba of 1948.[2] In the immediate aftermath of the establishment of the state of Israel, Israel  placed the 160,000 remaining Palestinian citizens of Israel under an 18-year “structure of exception into its everyday system of governance, placing them outside the law by racializing their presence as a threat.”[3] The military rule was a tool to dominate and contain the Palestinians and above that to displace and massively dispossess their land. For example, the discriminatory Absentees’ Property Law of 1950, made the properties of the Palestinian refugees to whom Israel had denied the right of return, as well as those who remained in Israel as internally displaced persons, eligible for confiscation and possession by the state.

After committing another wave of displacement and dispossession in 1967, and being in control of the Palestinian people as a whole and the whole territory of Palestine, Israel would transfer its military rule and land expropriation policies to the occupied territory and design a discriminating coercive environment that would drive ongoing Palestinian displacement, transfer in more and more illegal settlers, while condensing Palestinians in an open-air prison in the Gaza Strip and in Bantustans in the West Bank.

Commemorating Land Day amidst the coronavirus this year, the Palestinian people continue to face the ongoing Nakba, exemplified in their denial to return to their homes and the ongoing displacement on both sides of the Green Line. Rendering Palestinian homeless during a pandemic does not halt Israel from expanding its settler-colonial project. While Israel continues to fail to fulfil its obligation under international law to provide vaccines for Palestinians in the occupied territory, apart from Jerusalem, as part of its institutionalised regime of racial oppression and domination, it continues to subject them to the ongoing threat of displacement.

In one year since the spread of the coronavirus on 5 March 2020 in Palestine, Al-Haq documented Israel demolishing 362 Palestinian structures, including 267 homes, resulting in the displacement of 1,112 Palestinians, including 541 children and 132 refugees. Since November 2020, Humsa al-Fawqa, a Palestinian community in the Jordan Valley, has been raided, and demolished six times by the Israeli occupying authorities, leaving its 11 Palestinian families forcibly displaced amidst a global pandemic. 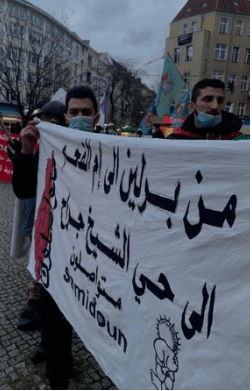 Protest in Berlin. The Banner reads “From Berlin, to Umm Al-Fahem to Sheikh Jarrah neighborhood. Continuing. We are steadfast”

In Jerusalem, 15 Jerusalemite families totalling around 195 Palestinians in Sheikh Jarrah and Batn Al-Hawa neighbourhood in Silwan, are currently at imminent risk of forced eviction, following the ruling of Israeli courts in favour of lawsuits undertaken by settler organisations.[4] The entire residents of those areas amounting to 900 Palestinians, most of whom are refugees, also face the looming fate of a secondary displacement and dispossession because of Israel’s discriminatory laws allowing the exclusive right for Israeli Jews to pursue claims to property ownership they allege to have owned in Jerusalem before the establishment of the settler-colonial State of Israel. 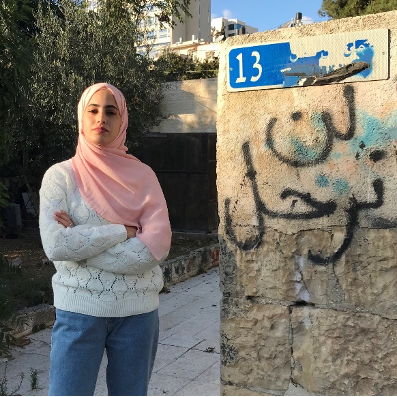 Much as Israel is persistent in achieving its attempt to empty Palestine of its indigenous people and controlling their land, the Palestinian people are even more determined in resisting this settler-colonial endeavor. The 1976 protests serve to emphasize the robust Palestinian resilience and the   typical brutal Israeli suppression of any Palestinian effort to resist its colonial rule.

Shielding its policies and practices under a supposed threat to the state’s security, Israel has been attempting at suppressing the will of the Palestinian people to resist its colonial rule, so as to maintain and expand its settler-colonial project, by using arbitrary and administrative detention military trials, torture, excessive use of force, movement restrictions, shrinking space for human rights defenders, and collective punishment in the form of house demolitions, residency revocations, withholding Palestinian bodies and curfews and closures.

The Great March of Return

In the Gaza Strip, Israel has collectively punished the entire population under the shield of security, confining the 2 million Palestinians in a 365 km² surface area since 2007. It continues to place the people of Gaza in an open-air prison, depicts them as terrorists, suppresses them economically, kills the civilian population unjustifiably, and destroys their communities in successive military assaults, making Gaza unfit for human life, as the UN has repeatedly warned.

In 2018, Palestinians in the occupied Gaza Strip chose Land Day to launch the Great March of Return. As 75 per cent of the Palestinian population in the Gaza Strip are refugees,[5] hundreds of thousands of Palestinians marched and set up tents with the names of the places they were displaced from along the Gaza fence, calling for the realisation of their right of return to their homes and an end to Israel’s illegal closure of the Gaza Strip. 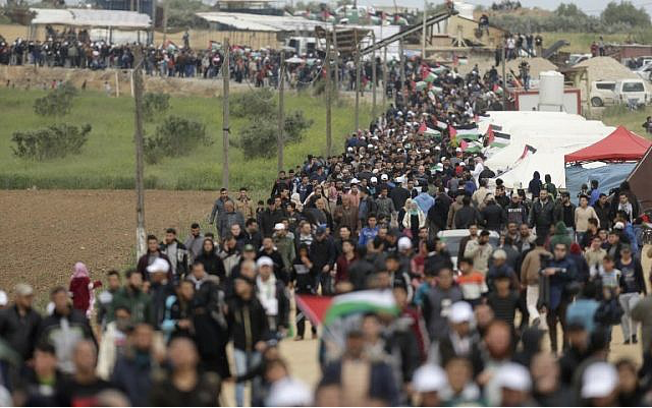 Palestinians march along the Gaza fence, east of Gaza City during the Great March of Return (AFP PHOTO / MAHMUD HAMS)

The mass demonstrations were held on a weekly basis over the course of one year, whereby the Israeli Occupying Forces (IOF) responded brutally in supressing the March, using systematic and deliberate excessive use of force and lethal force and killed 204 Palestinian demonstrators, including 43 children, nine persons with disabilities, three paramedics and two journalists and injured more than 9,000 Palestinians.[6]

On 19 March 2021, just ten days before the Palestinians would commemorate Land Day, the Israeli occupying forces killed ‘Atef Yousef Hanysheh as he was protesting Israel’s land expropriation in his village, Beit Dajan, in Nablus Governorate. Atef, 47, a mosque muazin, a husband and father of three children, was shot with live ammunition in the head from around 10-15 meters distance during the demonstration, according to Al-Haq.

‘Atef has been protesting land appropriations as part of the Friday weekly protests in Beit Dajan since December 2020, protesting further settlement expansion on their village. Each week, the demonstrators are met with Israeli occupying forces firing tear gas canisters, rubber-coated steel bullets or live fire. 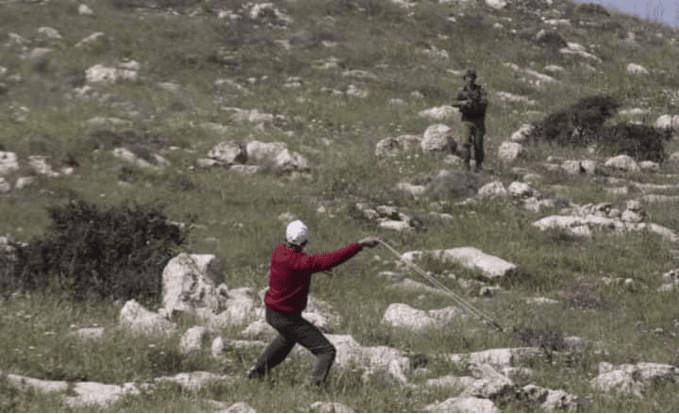 ‘Atef Yousef Hanysheh, 47, moments before he was shot in the head by an Israeli occupying soldier, as he was protesting Israel’s land expropriation in his village, Beit Dajan, in Nablus on 19 March 2021.

After 200 dunums have been confiscated in the 1970s from Beit Dajan village by Israel for the establishment of Al-Hamra and Mekhora illegal settlements,[7] recent attempts by illegal settlers to expropriate further land from the village since October 2020, have been threatening the residents of the village with further colonization of their land.

Whereas the 30th of march is a day to remember the killing of Palestinians in 1976 by Israeli brutality because they protested their land appropriation, it is also a day to highlight the historical and ongoing massive Israeli land appropriations as one tool to implement the settler colonial project. Land Day further serves to remind the world that the Israeli denial and suppression of Palestinian resistance and their right to self-determination is a policy intended to squash the Palestinian people’s will and dominate them to expand Israel’s settler colonialism.

In the Palestinian reality, every day is Land Day. On 30 March we reiterate what the Palestinian poet and one of the leading voices of the 1976 protests, Tawfik Zayyad, described:

In Lidda, in Ramla, in the Galilee,

we shall remain like a wall upon your chest,

and in your throat like a shard of glass, a cactus thorn,

and in your eyes, a sandstorm.

We shall remain like a wall upon your chest