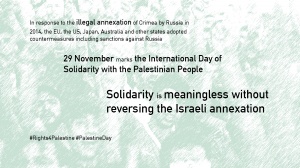 In 1977, the United Nations (UN) chose the 29th of November to observe an annual International Day of Solidarity with the Palestinian People, corresponding with the passage of the UN General Assembly’s partition plan of Palestine on 29 November 1947.

While the Palestinian indigenous people rejected the partitioning of their lands with their colonizer, the partition plan advanced against their wishes in the UN General Assembly in the form of a non-binding resolution. As it stood at that time, the plan violated sacrosanct principles of international law by its proposed partition of a Class A Mandate, which recognised the provisional independence and collective Palestinian right to self-determination, similar to the Class A mandates recognising the independence of Iraq, Syria and Lebanon. Although, the Zionist settler-colonial project in Palestine did not start with the partition plan, it certainly marked the last year in which Palestine in its entirety was precluded from reaching independence.

In 2020, the Palestinian people are marking a century since imperial powers convened at the San Remo Conference, granting Britain mandatory power over Palestine. Betraying the indigenous Palestinian people under its administration, Britain promised to make “a Jewish national home in Palestine”. Britain further incorporated the Balfour Declaration of 1917 into the preamble of its Mandate in 1923 and started to facilitate the Zionist settler-colonial project in Palestine, radically exceeding its competence as Mandatory having only temporary rights of administration in Palestine, and against its legal obligations under the League of the Nations’ Covenant to respect the wishes of the Palestinian people, the provisional recognition of their independence, and their right to self-determination.[1]

Britain reflected its promises into policy and actions and Zionist settler colonialism flourished under its Mandate,[2] through the facilitation and protection of Zionist immigration, systematic transfer of Palestinian state lands to the Zionist movement, and permitting the establishment of Zionist institutions and paramilitary groups.[3] When the Palestinian people resisted the looming Zionist settler-colonial project in their land during the Great Revolt (1936-1939), Britain crushed this promising Palestinian resistance imposing a harsh martial law,[4] and killed, wounded, detained and/or exiled an estimated 10 per cent of the Palestinian male adult population over three years.[5]

While Britain revisited its policy and acknowledged the mistake of proposing partition between an indigenous population and their coloniser in a policy paper in 1939, partition was an inevitable fate in an asymmetrical power reality. The newly established UN Special Committee on Palestine (UNSCOP) was entrusted with the future of the Palestinian people. The UNSOCP acknowledged that the right of the Palestinian people to self-determination and independence was violated during the mandate not because the Palestinian people lacked such title but “because of the intention to make possible the creation of the Jewish National Home.”[6] Yet, it proceeded to recommend partition.

The partition plan later paved the way for the Nakba - a mass displacement and expulsion of Palestinian refugees was perpetrated by Zionist militias. As Palestinian historian and poet Sanbar reflects: “The contemporary history of the Palestinians turns on a key date: 1948. That year, a country and its people disappeared from maps and dictionaries… A long absence was beginning.”[7]

Israel’s Apartheid Regime over the Palestinian People as a Whole

The establishment of the State of Israel continued the legacy of repressive British rule. Many British Emergency Regulations were imposed on the Palestinian citizens of Israel over the following 17 years, and later after 1967, on the occupied Palestinian people in the West Bank, including East Jerusalem and the Gaza Strip. The institutionalized regime of systematic racial oppression and domination over the Palestinian people as a whole which had been initiated in 1948 to facilitate the widespread and systematic ethnic cleansing of Palestine, continued in 1967, epitomized by mass forcible transfers of Palestinian people from their lands, sweeping land appropriations, repression of Palestinian resistance to advance settler colonialism and the entrenchment of Israeli-Jewish national domination over those remaining in historic Palestine.

British Mandate regulations that did not align with the Zionist settler-colonial vision were repealed and replaced. The Palestinian Citizenship Order of 1925, which accorded Palestinian citizenship and nationality to Palestinians and Jewish immigrants, was repealed and replaced with the inherently discriminatory and racist Citizenship Law of 1952,[8] which together with Law of Return of 1950, limit the grant of Israeli nationality and citizenship to Jewish persons only including those in the ‘Jewish Diaspora’, meanwhile systematically excluding millions of indigenous Palestinian refugees and exiles who are denied their right to return to their lands and homes. These laws, inter alia constitute Israel’s discriminatory legal foundation upon which Israel carries out its apartheid policies and practices and maintains its fragmentation of the Palestinian people as a whole to ensure Israeli-Jewish domination.

Seven decades and counting since the partition plan, the Israeli settler-colonial project continues to be perpetrated through Israel’s continued denial of the Palestinian refugees’ right of return, forcible transfer of the Palestinian people, dispossession of their land and natural resources, and denial of their right to self-determination – acts which amount to war crimes and crimes against humanity prosecutable at the International Criminal Court.

Seven decades and counting the international community’s failure to act to fulfill their obligations under international law has empowered Israel to continue its violations. An analysis of Al-Haq’s documentation since 2019, shows an escalation in Israel’s violations over the past year, underscoring the devastating impact on the Palestinian people, of Israel’s impunity in light of the international communities collective policy of exceptionalism and inaction in holding Israel to account.

In 2019, the Israeli Occupying Forces (IOF) demolished 180 Palestinian homes in the Occupied Palestinian Territory (OPT), of which 170 were demolished on the ‘grounds’ of lacking building permits and 10 on punitive grounds. These house demolitions resulted in the displacement of 669 Palestinians, of whom 122 had been previously displaced. Up until October 2020, as the world turned to face the challenges of the Coronavirus pandemic, Israel escalated its attacks on the Palestinian civilian population, demolishing 198 homes, 193 on administrative grounds as ‘unlicensed constructions’ and five punitively, resulting in the displacement of 733 Palestinians, of whom 88 were already refugees.

The IOF continued to employ unnecessary and excessive use of force in disregard of Palestinian life, with evidence of systematic targeting of the upper body, indicating shoot to kill practices. In 2019, 137 Palestinians were killed in the OPT, 112 succumbing to lethal injuries in their upper bodies. Up until the end of October 2020, some 28 Palestinians were killed including seven in the Gaza Strip, and 21 in the West Bank including East Jerusalem. Meanwhile settler attacks continued with impunity with 236 settler attacks documented in 2019, and continued in 2020 with 155 settler attacks recorded by the end of October 2020. At the same time, Israel continued to use mass arrests and detentions as a form of repression, with AddameerPrisoner Support and Human Rights Association reporting that at the end of October 2020, the incarceration of 4,500 Palestinians in Israeli prisons and detention centres, including 170 children.[9]

More than seventy years since the partition, the Palestinian people have witnessed the entrenchment of Israel’s apartheid and the abject failure of the international community to respond. The situation culminating in early 2020, with the United States (US) unilaterally imposed so-called “Deal of the Century” an annexation plan which UN Special Rapporteur Michael Lynk warned “would crystalize a 21st century apartheid, leaving in its wake the demise of the Palestinians’ right to self-determination”.[10] The Deal effectively endorses and rewards Israel’s crimes, prompting Third States including the United Arab Emirates and Bahrain, to follow suit with egregious normalization agreements in violation of international law, willfully ignoring the erasure, apartheid, annexation and collective punishment perpetrated against the Palestinian people by Israel.

While the Trump administration is leaving office beginning next year, it is making sure that its plan is reflected into policies and actions. Following his State visit an illegal settlement in November 2020, US Secretary of State Mike Pompeo, declared the grass roots anti-apartheid Palestinian led Boycott Divest and Sanction (BDS) movement as anti-Semitic. A designation intended to silence legitimate freedom of expression and association and which represents an unwarranted and dangerous attack on democratic values and fundamental human rights. The US administration also announced plans to import products from illegal settlements as “Made in Israel” in violation of its obligation under international law not to recognize and assist in the maintenance of an illegal situation.

Towards Justice and Accountability

That being said, some positive steps in 2020 included the release of the annual database of businesses operating in illegal settlements in February 2020, as a key mechanism of accountability and transparency to stop corporate complicity in Israel’s exploitation and appropriation of Palestinian lands and natural resources. Another positive step towards the realization of justice for the Palestinian people this year includes the progression of Pre-Trial Chamber proceedings on territorial jurisdiction at the International Criminal Court (ICC).

Seven decades and counting, it is time to show genuine solidarity with the Palestinian people by recognizing the situation as it is in Palestine and cooperating to bring to an end Israel’s apartheid regime and settler-colonial endeavors. It is time to support the ICC in holding those responsible for international crimes in the OPT accountable.

It is time to ban products made on expropriated Palestinian land by an illegal settler community and complicit businesses. It is time to implement effective sanctions on Israel until it reverses its systematic denial of the Palestinian people their inalienable rights. Solidarity is best expressed in cooperating to de-colonize Palestine, stop the Israeli apartheid regime, and bring to end the Israeli occupation. Seven decades and counting, it is time for real solidarity, time to take action.

[1] Palestine was placed under British occupation from 1917 till 1923, during which Britain did not enjoy full sovereign rights over Palestine under international humanitarian law. Victor Kattan, From Coexistence to Conquest (Pluto Press 2009) 81-82. From 1923, Britain, as a mandatory power, was obligated to respect the right of self-determination of the Palestinian people and Palestinian independence. UNSCOP, ‘Report to the General Assembly’ (3 September 1947) UN Doc A/364, para 160.

[4] Noura Erakat, Justice for Some: Law and The Question of Palestine (Stanford University Press 2019) 26.

[8] Noura Erakat, Justice for Some: Law and The Question of Palestine (Stanford University Press 2019) 57.