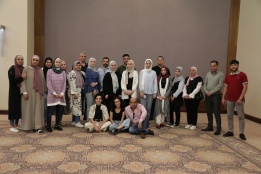 During the second day, Mr. Tahseen Alyyan has addressed the applications of the international humanitarian law in the Occupied Palestinian Territories. After referring to the historical development of the international humanitarian law, Alyyan addressed the foundations and principles of this law and its main concepts, the commitments and violations of the Israeli occupying authorities alongside the rights of the Palestinians as civilians living under this occupation.

The third day of the orientation was marked of a field visit to the villages northwest of Jerusalem, during which Al-Haq field researcher, Omran Risheq, has accompanied the participants to the villages of Bir Nabala, Al Jib, Beit Ijza and Beit ‘Anan. This visit has aimed to learn about the situation and suffering caused by the Israeli occupying polices through besieging those towns with the annexation wall, bypass roads, military checkpoints and Israeli settlements. They have also visited the home of “Sabri Ghareeb” in the village of Beit Ijza, who suffers from difficult conditions as a result of being trapped by barbed wire and fence by the Israeli settlers. Moreover, they have visited the “tunnels” road and the military checkpoints surrounding and besieging the villages of Beit Iksa and Nabi Samuil.

This orientation course comes as part of the work of Al-Haq organization and Al-Haq Center for Applied International Law with the law faculties in the Palestinian universities. Each faculty nominates one female and one male students to participate in this annual orientation course on different issues related to the international law and human rights. At the end of the fourth day, the training and capacity-building officer, Ziad Hamidan, handed the participants certificates of appreciation for their participation in the course.