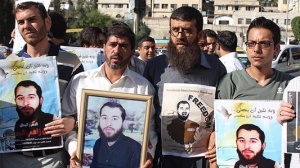 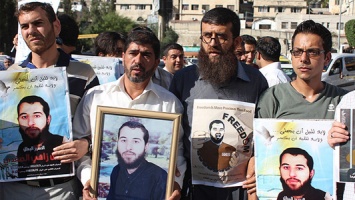 Addameer and Al-Haq are deeply concerned for the life of the remaining Palestinian hunger striker in Israeli prison, Ayman Sharawna, who is now on his 88th day of hunger strike. Ayman was visited on 24 September by Addameer lawyer Fares Ziad at Ramleh prison medical center, who reported that there has been a serious deterioration in his health.

In response to the refusal of the Israeli authorities to release him and to further escalate his strike, Ayman decided to stop drinking water for five days from 16-20 September, during which time he lost seven kilograms in weight. The deterioration in his health includes loss of sight in his left eye and the loss of all feeling in his right leg.

According to Adv. Ziad, Ayman did not want to start drinking water again but reluctantly did so out of fear for the deterioration in his health, particularly with his loss of eyesight and feeling in his legs. If he is not released, Ayman has declared that he will once again refuse water starting this Friday, 28 September. Ayman was re-arrested in January after being released in the prisoner exchange deal in October 2011. He is currently held without charge and the military committee has not yet reached a decision regarding whether or not Ayman will be returned to his prior sentence.

Adv. Ziad was unable to meet Samer al-Barq, who reportedly also suspended his historic 123- day renewed hunger strike on 21 September, following negotiations between the Palestinian Authority and Egypt, which resulted in Egypt agreeing to accept Samer if he is released by Israel. To date Israel has not made any announcements regarding his transfer.

Addameer and Al-Haq salute the courageous hunger strikes of Hassan and Samer and hope for a just resolution to Ayman’s case as soon as possible. Nevertheless, while the potential release of Samer from administrative detention should be welcomed, Addameer and Al-Haq are obligated to highlight their concerns with aspects of the proposed agreement that are fundamentally at odds with international law. Samer’s proposed release is conditional on his deportation to Egypt.

The terms of these expulsions violate Article 49 of the Fourth Geneva Convention, which prohibits forcible transfers and deportations of protected persons, a proscription that is part of customary international humanitarian law. Unlawful deportation or transfer also constitutes a grave breach of the Fourth Geneva Convention (GC IV) and therefore qualifies as one of the most serious war crimes. Given the stark asymmetry in power, resulting from the belligerent occupation, between the Palestinian and Israeli parties involved, neither the potential “consent” of the prisoner, in this case Samer Al-Barq, nor the fact that these deals have been negotiated by a Palestinian authority can serve as justification for the deportation as this contravenes the spirit of articles 7, 8 and 47 of the GC IV concerning the inviolability of the protections afforded by the Convention.

Addameer and Al-Haq reiterate that forcible transfer and conditional release is not an alternative to Israel ending its practice of administrative detention. It is imperative to demand a permanent resolution to Israel’s practice of arbitrary detention, in compliance with international humanitarian law. Addameer and Al-Haq call on the international community to intervene and demand that Israel immediately comply with its legal obligations, cease its policy of administrative detention and provide adequate and trusted healthcare for all hunger striking prisoners.