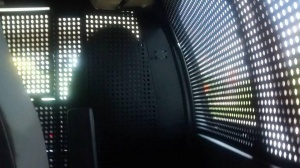 Scattered inscriptions written with toothpaste and food on the bunks and walls of an Israeli facility at the Ministry of Interior Population, Immigration and Borders Authority (PIBA) declare: “for each International Solidarity Movement you deport back home, ten more will come!”  Me and many before me read those words as we waited for our deportation. After hours of interrogation at the Tel Aviv Ben Gurion International Airport, we received a 10-year ban from entering the State of Israel for “security reasons.” With no further explanation, we were declared a threat.

During the seven-hour wait at the airport, I was repeatedly interrogated and questioned. Right from the start, I was told by two security officers that it has already been decided: I was getting deported, unless—said the one who played the role of the “good cop”—I cooperate.

To “cooperate” meant to tell them about every corner I had been in and every person I had met in Palestine on previous visits. They demanded I say that I witnessed Palestinian protesters throwing stones at armed Israeli soldiers during demonstrations I attended—which they supposedly already knew of from pictures taken by the IDF. I was calm and I answered their questions obligingly until they asked me for my cellphone’s password. I told them that I was a PhD student conducting research, and my purpose of visit was to take a course on International Law in Ramallah with Al-Haq organization, but I refused to give them my password or my contacts.

To gain access to my phone meant that Israeli security forces would gather names of activists and Palestinian “culprits.” In 2014, Gary Spedding, a British activist, went through something similar. Israeli forces collected messages and contacts from his phone and he was deported, after being accused of possibly causing tumult if he were to be allowed inside the country, due to his activity on social media.

I had interactions with Israeli agents where I was ordered and moved around, taking me from one room to another. From border services, where they took my picture and collected fingerprints, to a room where my body and my luggage were fully searched, to another room where I waited—and this I only understood later, since I was given no information—for the transportation to the facility where I was detained. From there I got a new order, “Get in the car.” I was alone with two agents; I sat in the backseat of a van with metal plaques blocking the driver’s cabin.

Only when we reached the facility did I get information about my flight back, which was leaving in nine hours. There I met a young Australian woman who had been waiting for four days and would only leave on the fifth. We were granted one phone call, food, ten minutes in the yard and a door that locked from the outside. We waited. At some point there were nine of us in a room with five bunk beds, much like a cell. Most of the detainees were women from Ukraine, Moldova, Georgia and Uzbekistan that were planning on touring in Israel and Palestine but were denied entry.

The Australian woman was also declared a threat: she participated in a protest in Bil’in on a previous visit, a village I had also been to. There, an organization called the “Bil’in Popular Committee Against the Wall” administers weekly protests against the Israeli occupation which took its toll on the village by reinforcing detentions and extending the Israeli separation wall to engulf agricultural land. The resistance has been partly victorious, and the wall’s course had to be slightly diverted. The committee’s own coordinator, Abdullah Abu Rahmah, who was already imprisoned before, is waiting for a new trial for new accusations.

I was taken by car from the detention center directly to the airplane’s door. An agent escorted me inside the aircraft and delivered my documents (which had been in their possession the whole time) to the flight attendant.

It is within Israeli policy to deport activists who demonstrate solidarity with the Palestinian cause to end the Israeli occupation. That is not news. In 2003, for instance, eight members of the International Solidarity Movement, all European and North American, were deported because they were protesting against the confiscation of Palestinian land to construct the Israeli separation barrier near Jenin, in the occupied West Bank. Protestors were also moving roadblocks near Nablus to call attention to the obstacles Palestinians face in movement on their own land.

In 2011, about two hundred activists were detained and deported upon their arrival at the Israeli airport. A Haaretz news article from July of that year informs that a group of twenty-five people who were suspected of being “pro-Palestinian activists” had their entries denied. Sixty-nine others had already been questioned and deported in the same period of time. Israel’s Ministry of Transport had also delivered airline companies a list with the names of 342 other people who were barred from boarding planes to Israel.

Another Haaretz article from the same month states that “Israel has thus far been successful in preventing the entry of 200 passengers wishing to come to Israel as part of the Welcome to Palestine campaign, which had organized a ‘fly-in’ to the Middle East this weekend for solidarity visits in the Palestinian territories.” This only reveals a fragment of Israeli tactics of persecuting any demonstration of solidarity with the Palestinian people. Academic campaigns and the Boycott, Divestment and Sanctions movement (BDS) have been the most visible targets. Israeli harassment of Palestine activism does not stop there: Israeli human rights groups are also infringed upon. Breaking the Silence, an Israeli platform for soldiers to come forward and give testimonies about the crimes and atrocities they have witnessed and participated in with the Israeli Defense Forces, is an example of such organizations.

There are numerous cases of Palestinian deportations by Israel since the beginning of the military occupation. From 1967 to 1992, according to B’Tselem, Israel has deported 1,522 Palestinians from their own territories. In 2002, 32 people were deported from the West Bank to the Gaza Strip for “administrative reasons,” with no charges or trials against the deportees, and without their defenses being heard.

Brazilians do not need visas to visit Israel, and Israelis do not need visas to visit Brazil. However, I doubt that a sum of deportations from either countries would be balanced, let alone for political reasons. In 2015, two other Brazilians from Palestinian descent were denied entry on a solidarity visit, part of a group of social movements coming from the World Social Forum in Tunisia. They were also banned from returning to Israel in the future.

Going back to Palestine is not an option for the next 10 years—unless the Israeli Embassy grants a “special permit,” or until the Palestinians can finally control their own borders. If this experience results in an appeal, it would be for the end of the Israeli occupation. After all, that is the target: solidarity with the Palestinian people and a joint struggle for a free Palestine.

Moara Crivelente is a PhD student in International Relations and Conflict Resolution, a journalist and a member of the Brazilian Center for Solidarity with the Peoples and Struggle for Peace (Cebrapaz), advising the Presidency of the World Peace Council. She blogs at The World and The Resistance.