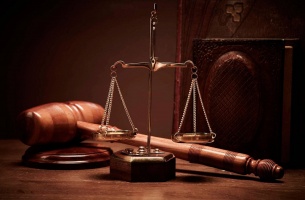 Representing over 200 civil society organisations, the Civil Coalition for Control of the Legislative Process, Palestinian Human Rights Organisations Council (PHROC), Palestinian NGOs Network (PNGO), and Coalition for Economic and Social Rights held a broad-based meeting at Al-Haq to discuss the Law by Decree on the High Criminal Court. The Law by Decree was approved by the President on 30 December 2017 and published in the Palestinian Official Gazette on 18 January 2018, without public consultation, and in the absence of a transparent process of review.

This approach has been maintained to approve regulations, which impinge on human rights and freedoms. Similar regulations include the Law by Decree Amending the Law on the Supreme Constitutional Court and Law by Decree on Cybercrime. This reflects the Executive Authority’s insistence on monopolising and controlling the law-making process in the absence of the Palestinian Legislative Council (PLC). This tendency is inconsistent with the National Policy Agenda (NPA) 2017-22: Putting Citizens First and the Government’s Legislative Plan, which highlight a participatory approach to the legislative process.

In their broad-based meeting, civil society organisations stressed that the Law by Decree on the High Criminal Court violated the provisions of the Amended Basic Law, International Covenant on Civil and Political Rights (ICCPR), Law on the Judicial Authority, Law on the Formation of Regular Courts, and Penal Procedure Law. It gravely infringes on guarantees of a fair trial, powers and independence of the Judicial Authority, and the proper administration of justice. The Law by Decree should be repealed for many reasons, most notably:

1. From a constitutional perspective, the approval of the Law by Decree, does not satisfy the prerequisite of necessity. Before it was approved and published, the Law by Decree had been placed on the agenda of the Council of Ministers more than a year ago, who ruled against delay premised on the condition of necessity while further highlighting its unconstitutional status. The justifications provided in the Explanatory Note to the Law by Decree, including resolution of the protracted litigation process and lack of specialised judges who can examine serious criminal cases, are also baseless. The fact that these cases are remitted from Courts of First Instance to the High Criminal Court will cause an ever increasing backlog, increasing case congestion and disrupting the proper administration of justice. In addition, the Law by Decree does not prescribe any principles or criteria concerning membership on the court panel. This contradicts the claim regarding the need for specialised judges, as stated in the Explanatory Note. It is also inconsistent with the Law by Decree itself, which provides that the court shall consist of a panel of judges, the grade of whom is not less than a judge of the Court of the First Instance. Contrary to the explanatory note, this means that the panel will include the same judges. By contrast, the Law by Decree casts doubt on the competence of judges of the Courts of First Instance who have judged thousands of criminal cases. Hence, approval of the Law by Decree is neither justified nor necessary.

2. The fact that the High Criminal Court is established in accordance with a law by decree is contrary to the provisions of the Basic Law. Article 97 of the Basic Law explicitly provides that the law determines the way courts are constituted and their jurisdiction. The constitutional legislator assigns the power to form and set the jurisdiction of courts to the law; that is, an authentic legislative act that is passed by the Legislative Authority. Thus, the High Criminal Court may not be formed by means of extraordinary regulation (a law by decree), overriding the competence of the legislature. The court should be formed under a law enacted by the parliament. Accordingly, the Law on the Judicial Authority and Law on the Formation of Regular Courts are amended so as to create this court, if necessary. It is worth noting that the Law by Decree on the High Criminal Court No. 7 of 2006 was repealed by the PLC. In addition to infringing on guarantees of a fair trial, this regulation did not fulfil the condition of necessity that cannot be delayed so that it could be enacted. This further highlights the Legislative Authority’s position towards the present Law by Decree.

3. The Law by Decree involves a grave violation of the powers and independence of the Judicial Authority. It grants the Attorney General with the power to request, albeit in a binding manner, that the High Criminal Court convene in any governorate of the State (Article 3). This is inconsistent with the provisions of the Law on the Judicial Authority and Law on the Formation of the Regular Courts, which entitle the Presiding Judge of the High Court to set the rules of ratione loci of the court. Also encroaching on judicial powers and independence, the Law by Decree entitles the Attorney General to request that a case be remitted from the court panel, which is competent to hear it, to another panel of the same grade, including the investigation stage (Article 16). As such, Public Prosecution  an adversary party to the criminal case  goes beyond its role. The adversary party does not elect its judge. The fact that the request for remitting cases involves the investigation stage undermines the rules of ratione loci under the Penal Procedure Law. It may be tailored to look for judges who are on the same footing with the Public Prosecution, accepting requests to extend the detention of accused persons.

4. The broad powers which the Law by Decree gives to the High Criminal Court, including crimes against the internal and external security of the State, gives rise to questions about the role the court will play in the upcoming stage. These crimes are overbroad and loosely defined. Besides potentially politicising functions of the court, they prejudice human rights and freedoms, particularly the right to freedom of expression. In addition to cybercrime, these include the crimes of “weakening the national sentiment”, “disseminating news that undermines solemnity of the State”, “disseminating news that affects the morale of the nation”, and “instigating confessional or racial bigotry”. The court powers are also in violation of international human rights standards, particularly those relating to the right to freedom of expression under the ICCPR. The Law by Decree further impinges on guarantees to a fair trial. A number of crimes are, in fact, misdemeanours and do not fall within the court jurisdiction. Consequently, the High Criminal Court may provide a tool for the persecution of opponents to the Executive Authority.

5. The Law by Decree vests the Public Prosecution with broad and unrestricted powers to take all necessary precautionary measures in relation to the incident when it conducts the preliminary investigation (Article 7). Without any guarantees or judicial control, the nature and time limit of these precautionary measures are never stated. According to this overbroad provision, measures affect both persons and properties. It authorises the Public Prosecution to issue forth orders on travel ban and inclusion on pre-arrival screening lists without restriction and beyond judicial review, infringing both international standards and relevant Palestinian regulations.

6. The Law by Decree entitles the Public Prosecution to detain the accused following interrogation for four days (Article 8), derogating from safeguards for the accused. According to the Penal Procedure Law, the accused is detained for a period of 48 hours, after which they are brought before the court. This provision violates the provisions of Article 9 of the ICCPR on arbitrary detention. In General Comment 35 on Article 9 of the ICCPR, the Human Rights Committee confirms that the 48 hour period is ordinarily sufficient to transport the individual and to prepare for the judicial hearing.

7. The Law by Decree violates safeguards for the accused by allowing the Prosecutor to interrogate them before their lawyer is summoned in cases of necessity, urgency and fear for the loss of evidence (Article 10). This is inconsistent with international human rights standards. In its Resolution A/HRC/RES/13/19, the Human Rights Council highlights that accused persons have the right to have access to and consult with a legal counsel from the moment they are deprived of their freedom. The European Court of Human Rights also confirmed that the right to defence may be irreversibly affected under such circumstances (Salduz v. Turkey  36391/02). Additionally, the 1990 Basic Principles on the Role of Lawyers emphasise the right to call upon the assistance of a lawyer in all stages of criminal proceedings.

8. The Law by Decree impinges on the presumption of innocence. It views detention as a punishment, rather than an exceptional precautionary measure. It also allows the Attorney General or one of his assistants to detain an accused person, who has been released, if new evidence emerges against him in the same criminal offence (Article 11). Under the guise of new evidence, this renders the period of detention open-ended and subject to frequent renewal after the accused person is released. Furthermore, the Law by Decree vests the Public Prosecution with the power to issue orders for release during the investigation stage. Hence, these provisions reverse the procedures and safeguards enshrined in the Penal Procedure Law, giving unrestricted powers to the Public Prosecution at the expense of courts. Again, the Law by Decree violates the presumption of innocence, guarantees of a fair trial, the Basic Law, and Penal Procedure Law as it prescribes that the judgements rendered by the High Criminal Court are subject to “expedited enforcement” (Article 17).

9. The Law by Decree violates the double-hearing principle and deprives the accused person of a hearing. It provides that appellate objections are examined “without summoning the parties” with the exception of judgements ruling for the capital punishment and hard labour for life (Article 19), gravely impinging on guarantees of a fair trial. Contrary to the Penal Procedure Law and international conventions, the Law by Decree transforms the Court of Appeal into a court of law. In particular, General Comment 32 on Article 14 of the ICCPR: Right to equality before courts and tribunals and to a fair trial, the Human Rights Committee highlights that appellate proceedings should be attended by relevant adversary parties. This is an additional guarantee of justice in favour of the accused and is of great significance to maintain public trust and confidence in the justice system.

Against this background, at the conclusion of their broad-based meeting, civil society organisations emphasise the following:

1. Demand that President Mahmoud Abbas repeal the Law by Decree on the High Criminal Court because it does not fulfil the condition of necessity, infringes on guarantees of a fair trial, disrupts the proper administration of justice, and violates the Basic Law, international human rights standards, and relevant regulations.

2. Deal with the High Criminal Court as an illegal entity, and launch an ongoing lobbying and advocacy campaign, using lawful mechanisms and tools to delegitimise the court until a law by decree is promulgated to the effect of dissolving the court.

3. Maintain cooperation with the Board of the Palestinian Bar Association to reach a consolidated position. To delegitimise the Court, lawyers will not appear before the High Criminal Court. Lawyers will also join forces to thwart the Law by Decree.

4. Demand that President Mahmoud Abbas stop promulgating laws by decrees, take serious action to halt deterioration of the human rights situation, immediately begin to revamp the fractured political system, restore the principles of the rule of law, separation of powers and judicial independence, and start preparations to organise presidential and legislative elections.

Membership on the Palestinian NGOs Network (PNGO) includes 135 civil society organisations in both the West Bank and the Gaza Strip.