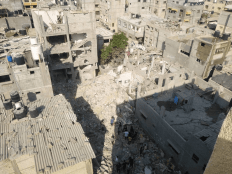 Since Israel launched its military offensive on the Gaza Strip on Friday 5 August, Al-Haq has traced a pattern of attacks against civilian objects, which indicate a breach of the principle of distinction and clearly violate the principle of proportionality in attacks. Such attacks may amount to war crimes, and a widespread and systematic attack against the civilian population amounting to crimes against humanity. Al-Haq is extremely concerned by the alarming number of casualties, including the killing of 46 Palestinians, of these sixteen children and four women, and the injury of at least 360 Palestinians in the Gaza Strip.[1]

Over the past 48-hours, Al-Haq’s field researcher’s preliminary investigations have revealed patterns of attacks illustrating where the Israeli Occupying Forces (IOF) bombed, shelled and used armed drones against civilian objects, primarily civilian homes, but also targeting a university, and a civilian jeep surrounded by a wedding party, which illustrate a clear breach of inviolable rules of the laws of armed conflict, such as the principle of distinction. Of particular concern is the direct targeting of civilians by Israeli armed drones and the targeting of densely populated residential areas. The timeline shows a sustained targeting of civilian properties at many intervals averaging one per hour over the 48-hour period.

During the reporting period, Al-Haq documented a further four, armed drone attacks, occurring over an hour between 3:30 pm and 4:30 pm on Saturday 6th August. Three of the drone attacks fired single missiles at civilian homes at the house of Abdullah Abu Harbid in the Nazaza area, the house of Nidal Sehwil located on Zimmo Street, and the house of Ayman al-Basiouni in al-Sikka Street in the Beit Hanoun area, while three missiles were fired on the civilian property of Ibrahim Nasser in Al-Bura Street which similarly indicate a breach of the principle of distinction. Two hours later, at approximately, 6:30 pm an Israeli drone targeted a gathering of civilians in the vicinity of Abu Sharekh roundabout in Jabalia, injuring three civilians, including a child. The civilians were transported to the Indonesian Hospital, with moderate injuries.

The abovementioned incidents reveal a widespread and systematic pattern of attacks targeting civilians and civilian objects in breach of the cardinal international humanitarian principle of distinction.[2] This rule obliges warring parties to distinguish between civilians and combatants and civilian objects and military objectives and to direct their attack only against combatants and military objectives.  The principle of distinction reflects customary international law and is therefore applicable to Israel’s conduct of hostilities.[3] Derived from this principle is the customary prohibition against attacks aimed at spreading terror within the civilian population. Notably, indiscriminate and widespread shelling have been considered as acts terrorising civilians, by the UN General Assembly along with the regular bombardment of cities.[4] Given Israel’s intense and frequent bombing and shelling of Palestinian civilian residential areas, such acts may amount to acts of prohibited violence aimed at terrorising the civilian population. Notably, Articles 8(2)(b)(i) and 8(2)(b)(ii) prohibit as crimes within the jurisdiction of the International Criminal Court, acts including “intentionally directing attacks against the civilian population as such or against individual civilians not taking direct part in hostilities” and “intentionally directing attacks against civilian objects, that is, objects which are not military objectives”.[5]

During the reporting period, Al-Haq documented an attack in a densely populated residential area which may be considered excessive in relation to the expected military advantage.

On August 6, at approximately 21:30 in the evening, the IOF carried out an attack against a military commander in Saraya Al-Quds, the military wing of Islamic Jihad, Khaled Mansour. The IOF targeted several houses in the Al-Sho'ut neighbourhood in Rafah city, where the IOF warplanes launched a number of missiles, without warning. These targeted a three-storey concrete house belonging to Hussein al-Mudallal, and other nearby houses, in the Al-Sho'ut neighbourhood of the Rafah refugee camp, a densely populated residential area, west of Rafah, in the southern Gaza Strip. This resulted in fully destroying eight houses and the killing of three combatants from the Al Quds Brigades and seven civilians, including a child and two women, and the injury of 35 civilians, including 18 children and 12 women, in addition to the partial damage of a number of other houses. The deceased and injured were transferred to Abu Yousef Hospital in Rafah, and to the European Gaza Hospital in Khan Yunis.

Al-Haq warns that such attacks targeting military commanders in densely populated areas with the easy foreseeability of high civilian casualties may breach the principle of proportionality enshrined in Article 51(5)(b) of Additional Protocol 1 (1977). The latter requires parties to an armed conflict to employ means and methods of warfare that would not cause excessive damage to civilian lives or civilian objects in relation to the expected military advantage.[6] Breach of such, also amounts to a war crime within the jurisdiction of the International Criminal Court, which criminalizes acts of “intentionally launching an attack in the knowledge that such attack will cause incidental loss of life or injury to civilians or damage to civilian objects … which would be clearly excessive in relation to the concrete and direct overall military advantage anticipated”, when carried out in the context of an international armed conflict.

Throughout the reporting period, and in a marked departure from previous hostilities, in the incidents documented, Israel failed to issue precautions in attacks, despite this being a core requirement both under Article 2(3) of the 1907 Hague Convention (IX) and Article 57(1) of Additional Protocol I, which are binding on Israel as customary international law. Those who are planning on an attack must, where “feasible”, issue precautions in attack and must call off an attack which is likely to cause excessive civilian damage. In this vein, Article 57(2)(b) of the 1977 Additional Protocol I states that with respect to attacks, the following precautions shall be taken: “An attack shall be cancelled or suspended if it becomes apparent that the objective is not a military one or subject to special protection or that the attack may be expected to cause incidental loss of civilian life, injury to civilians, damage to civilian objects, or a combination thereof, which would be excessive in relation to the concrete and direct military advantage anticipated”.

On August 6, at approximately 17:30, Israeli warplanes bombed, with two missiles, empty land north of Al-Nuseirat camp in the Central Governorate, wherein a woman sustained minor injuries and bruises, and a number of civilian homes were damaged. In the new town of Abasan, east of Khan Yunis, at around 6:00 pm, on 6 August, a child Nayef Khaled Al-Owaidat, 10, was wounded with a flying stone to the head, and was transferred to the European Gaza Hospital, with moderate injuries, after Israel attacked agricultural lands nearby. Ten minutes later a woman in Abasan, east of Khan Yunis, was moderately injured and transferred to the European Gaza Hospital, as Israel continued its bombardments of agricultural lands. On Sunday, 7 August, two further civilians were wounded when IOF war planes bombed agricultural lands east of the town of Qarara, east of Khan Yunis. They were transferred to Nasser Medical Hospital, west of Khan Yunis, and their injuries were described as moderate.

The cases above, not only illustrate Israel’s continuance of disproportionate attacks resulting in excessive civilian casualties, but also illustrate the intentional attacks on the natural environment which may have longer term consequences. Notably, Article 35(3) of the 1977 Additional Protocol I, prohibits the employment of “methods or means of warfare which are intended, or may be expected, to cause widespread, long-term and severe damage to the natural environment.” Rule 5 of the codified customary international law, requires that parties to a conflict employ the principle of distinction and this also extends to the protect the environment from attack unless it is considered a military objective.[7] Again, this requires proportionality in attacks and where incidental damage is excessive in relation to the direct and concrete military advantage, this will be considered a disproportionate attack. Give the presence of civilians, including women and children, in addition to the fundamental reliance on agricultural land for survival in light of the 15-year closure of the Gaza Strip, the direct attacks on agricultural lands may be considered a disproportionate use of force.

On 5 August, on the lead up to the current military offensive on the Gaza Strip, Israeli Defense Minister Benny Gantz stated: “To our enemies in general and to the leaders of Hamas and Islamic Jihad I say explicitly, ‘Your time is limited. The threat will be removed one way or another”[8]. Moreover, in a joint statement, Prime Minister Yahir Lapid and Benny Gantz stated that “[a]nyone who tries to harm Israel should know: we will find you. The security forces will act against Islamic Jihad terrorists to eliminate the threat they pose to the citizens of Israel.”[9] This traditional rhetoric reflects the Israeli military Dahiya doctrine which was explained by a former Israeli military official as follows: “We will wield disproportionate power against every village from which shots are fired on Israel, and cause immense damage and destruction. From our perspective, these are military bases [..] This is not a suggestion. This is a plan that has already been authorized.”[10]

The above statements make it very clear that Israeli officials intentionally directed widespread and indiscriminate attacks on Gaza, and may therefore be prosecutable for a number of international crimes. Under the Rome Statute of the International Criminal Court, the above-mentioned acts amount to a number of war crimes, including attacking civilians,[11] wilful killing,[12] inhuman treatment,[13] wilfully causing severe suffering[14] as well as causing excessive incidental death or injury.[15] They are further part of Israeli widespread and systematic attack against the Palestinian civilian population in the OPT, and are prosecutable as crimes against humanity of persecution,[16] and apartheid.[17] We therefore urge the Prosecutor of the International Criminal Court to include these incidents in its investigation in the Situation in Palestine. We further remind Third States of their obligation to apply their universal jurisdiction when appropriate, pursuant to Article 146 of the Fourth Geneva Convention.

[1] Preliminary figures from Palestinian Ministry of Health and Al-Haq's documentation, as of 15:30 on Monday, 8 August 2022. Al-Haq investigations are ongoing and will include disaggregated data.

[7] Protecting the Environment During Armed Conflict

[8] Times of Israel, “Gantz vows Islamic Jihad threat on Gaza border will be removed ‘one way or another”, 5 August 2022, available at: https://www.timesofisrael.com/gantz-vows-islamic-jihad-threat-on-gaza-border-will-be-removed-one-way-or-another/,