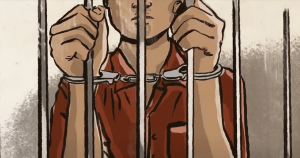 Every year, on 17 April, Palestine marks a national day in support of the Palestinian political prisoners imprisoned by Israel, the Occupying Power. Israel’s settler-colonial and apartheid regime is maintained and entrenched through its commission of widespread and systematic inhumane acts against the Palestinian people, including, mass arrests, arbitrary detention, collective punishments and the collective denial of the right to self-determination and right of return of Palestinian refugees and exiles.

Currently, there are 4,450 Palestinians incarcerated by Israel, including 160 children under the age of 18, and 32 female prisoners, including one female minor. The vast majority of Palestinian prisoners are imprisoned in Israeli prisons inside the Green Line, amounting to acts of forcible transfer from the occupied territory, in violation of Article 49 of the Fourth Geneva Convention (1949).[1]

Palestinian prisoners in Israeli prisons continue to face systematic ill-treatment and torture. Currently, more than 600 Palestinian prisoners in Israeli prisons suffer from a wide range of illnesses and lack of access to proper medical care,[2] 200 of them have been diagnosed with chronic diseases, including 22 who have been diagnosed with cancer.[3] The most serious case being that of Naser Abu Hmaid, who is in a critical condition and suffering from lung cancer.

Additionally, Israel is holding 530 Palestinian under administrative detention, a procedure whereby Israel incarcerates Palestinians without trial based on ‘secret information’, in violation of the right to due process and a fair procedure under Articles 9 and 14 of the International Covenant on Civil and Political Rights,[4] and a war crime under article 8 (2)(a)(vi) of the Rome Statute of the International Criminal Court.[5]

Since January 2022, Israel has arrested more than 2,140 Palestinians according to a joint statement issued by prisoners’ organizations. These arrests have particularly intensified since March and the start of Ramadan, with sweeping raids and arrests taking place in Jenin and Jerusalem.  On Friday morning April 15th, the Israeli Occupying Forces (IOF) raided Al-Aqsa mosque and conducted mass arrests of more than 450 Palestinians from the Al-Aqsa compound after having attacked worshippers prior to the dawn prayer.

This year alone, Israel has issued approximately 400 administrative detention orders[6] against Palestinians, most of which are renewals of previous detention orders. Administrative detainees are prohibited their right to fair trial, including the reasons for their arrest. The detention periods are usually issued for six months periods subject to renewal and Israel’s military courts may extend their detention indefinitely on this basis.

On 1 January 2022, around 500 Palestinian administrative detainees launched a campaign to boycott Israel’s military courts in protest against their arbitrary arrests by Israel’s apartheid regime.[7] This collective disobedience intends to highlight the inhuman and degrading punishment of Palestinians based on ‘secret information’.

Similarly on 7 March 2022, Salah Hammouri, a Palestinian-French Jerusalemite, long-time human rights defender (HRD) and Addameer lawyer was arrested and placed under administrative detention for three months. Salah’s ongoing persecution by Israel,[8] includes arrests, detention, denial of movement, residency revocation and his wife’s deportation. Salah's case has been highlighted by UN Special Rapporteurs,[9] NGOs,[10] and human rights organizations.[11] For that, Israeli occupation authorities have systematically harassed and targeted Salah, a vocal Palestinian human rights advocate, to repress his right to freedom of expression and delegitimize and discredit his work as a human rights defender.

After Israel outlawed six of the leading Palestinian human rights and civil society organizations as designated “terror organizations” in October 2021, it sentenced President of the Union of Palestinian Women’s Committees, Khitam Saafin to 16 months’ imprisonment, for membership of an outlawed organization, based on secret evidence. The move is intended to silence Palestinian civil society and prevent work documenting and monitoring Israel’s violations of international law.

In March 2022, the UN Human Rights Committee called on Israel to “immediately put an end to the widespread practice of arbitrary arrests and detention, including administrative detention, of Palestinians, in particular children. It should ensure that Palestinian detainees, including those held in administrative detention, are provided with all legal and procedural safeguards, including the rights to be informed of the reason for their arrest and detention, to access legal counsel and be brought promptly before a judge, and to notify a person of their choice of their detention, in line with article 9 of the Covenant”.[12]