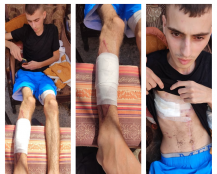 In 2020 the trend of unlawful shootings and killings of Palestinians by the Israeli Occupying Forces (IOF) continued, leading to the death of 32 Palestinians, including nine children and one woman across the Occupied Palestinian Territory (OPT).[1] Many of these unlawful killings involved the use of live ammunition and excessive force by the IOF, some of them clearly appearing to be wilful even though their victim posed no imminent threat.[2] Most injuries sustained were located in the upper part of the body.[3]In the first six months of 2021, another 42 Palestinians were killed by the IOF in the West Bank.[4] Of these, 15 were killed in circumstances described as “calm”, while 27 were killed during peaceful protests or military raids.[5] These unlawful killings are often perpetrated with impunity. A recent draft law, seeks to formally prevent Israeli soldiers from being held accountable for the killings of Palestinians.[6] This practice amounts to a de-facto shoot-to-kill policy.

This special focus examines the IOF targeting of minor, Abdallah Abu Baker, 17 through the lens of applicable international human rights and humanitarian laws. It situates the problem of resort to excessive use of force against the child within the context of Israel’s apartheid and colonial project, and argues that such violations are key to its entrenching of a racial domination over the Palestinian people and their lands.

“My name is Abdallah Abu Baker and I am a 17-year-old Palestinian from Ya’bad village, south of Jenin. On Sunday 24 July 2021, my two friends, Adham Ibrahim Abu Rumaila, 22 and Shaalan Kiwan Abu Bakr, 22 and I drove to the Zabadeh Bridge area, located to the western side of Ya’bad. We got off the vehicle and approached the Zabadeh Bridge, overlooking the main street through which the Israeli Barta’a Crossing is accessed. The road is used by Israeli settlers and Israeli military vehicles.

I was in possession of a Molotov cocktail and was preparing to throw that bottle at one of the settlers’ vehicles as it passed below the bridge. I did not notice the presence of any Israeli soldiers or military force, especially since the site is dotted with olive trees, what does not offer much visibility. All of a sudden, and without prior warning, I found myself hit by a bullet fired on my right foot. I managed to walk for about five meters before falling on the ground. My friend Adham approached me and managed to grab me to help me reach out vehicle. During that time, we were all surprised to see a large number of Israeli soldiers in military uniform. One of them, fully armed, came out from among the olive trees scattered throughout the site. The soldiers started surrounding us in all directions while shouting at us. My friend had to put me on the ground as the soldiers approached, arrested and transferred him to an Israeli military vehicle that had just arrived at the side.

I was now lying on my back, when I saw an Israeli soldier wearing a military uniform and carrying a pistol in his hand. He came towards me and stopped right above me, pointing his weapon in my direction. He fired a first bullet towards my stomach and another in my chest from a very short distance. Two other soldiers followed him. One grabbed me by my left foot, and the other by my left hand and they dragged me into a military ambulance, as I remember. I passed out as soon as I got into that vehicle.”

22 Days into the Coma

“My injuries were located on the right side of my stomach and chest. I had been hit by four bullets, two in my right leg, one in my abdomen and one in my chest. When I woke up from the coma, I found myself in a hospital, my father next to me, and I learned from him that I was in the Hadera Hospital, Hilil Hayafa inside the Green Line. It was 15 August 2021, and I had was 22 days into a coma. I had undergone four different surgeries, including a skin transplant on my right leg, an operation aimed at removing part of my right lung, and a liver surgery –since I had been shot in the liver area. I stayed 40 days in the hospital for treatment.

I was taken out of the Israeli hospital after the Palestinian Ministry of Health refused to continue cover the costs of my treatment. I was transferred by an Israeli ambulance to the front of the Barta’a crossing and transferred to the Jenin Governmental Hospital by an ambulance belonging to the Yabad Electricity Authority. I stayed only two hours, before I got transferred to Al-Ahly Hospital in Hebron, where I received treatment for a whole month throughout which I received several surgeries at the site of my body injuries, before returning to my home in Ya’bad.”

“I still suffer from my injuries, and I lost 25 kilograms. I can barely walk on my right foot and feel exhausted if I try to engage in any activity. I am still under treatment and follow-up with Al-Ahly Hospital in Hebron, since the date of my release until today.

Until now, I have not been subjected to any arrest or investigation on behalf of the Israeli occupation. My two friends Adham Abu Rumaila and Shalan Abu Bakr were arrested and are still detained at this time.”

Employment of excessive force is an IOF strategy to silence, punish and weaken legitimate resistance against its multi-layered oppression perpetrated against the Palestinian people that oppose its colonial apartheid regime. Under Article 9(1) of the International Covenant on Civil and Political Rights (ICCPR), Abdallah Abu Baker “has the right to liberty and security of person,” [8] and the right to “freedom from injury to the body and the mind, or bodily and mental integrity”.[9] Article 9(1) of the ICCPR remains applicable during situations of military occupation, especially in cases of law enforcement not meeting the threshold of active hostilities, as is the case with Abdallah Abu Baker.[10]

Further, any unjustified infliction of bodily injury by law enforcement officials,[11] breaches the right to security of the person. The right to security of the person is interrelated to the right to life as enshrined in Article 6(1) of the ICCPR, which provides that “every human being has the inherent right to life [and] no one hall be arbitrarily deprived of his life.”[12] No derogation to the right to life is permitted, including in situations of armed conflict.[13] The right to life is to be interpreted broadly, as “the entitlement of individuals to be free from acts and omissions that are intended or may be expected to cause their unnatural or premature death, as well as to enjoy a life with dignity.”[14] The right to life, in the best possible state of health, is a sine qua noncondition to the furtherance of other fundamental human rights.[15] States must respect and ensure the right to life, including by preventing “reasonably foreseeable threats and life-threatening situations that can result in loss of life [and] even if [they] do not result in loss of life.” [16] Moreover, children under 18 years old must enjoy an “inherent right to life” as per Article 6(1) of the Convention on the Rights of the Child.[17] Article 24(1) of the ICCPR entitles all children to “such measures of protection as are required by his status as a minor […].”[18]

Any derogation to the right to the security of the person is subject to strict requirements. It should follow normal procedures in circumstances of armed conflict but be strictly proportionate to the exigencies of the actual situation.[19] Moreover, States shall implement both preventive and retrospective measures that include criminal laws to forestall past and future injury, especially against children, and including through the prevention of unjustifiable use of force in law enforcement.[20]

By targeting Abdallah Abu Baker with live bullets, in the upper part of his body, when Abdallah was clearly incapacitated, the IOF acted arbitrarily in putting both his security and life at risk.[21] Regardless of his initial possession a Molotov cocktail, he later, did not pose any imminent threat to the soldiers that would justify the use of live fire in self-defence. [22] The use of live bullets constituted potential lethal force that was disproportionate considering the disparity of power between Abdallah Abu Baker and the group of soldiers. As such, the shooting was unnecessary and the soldiers could have used other methods to neutralize him. [23]

A Culture of Impunity

Excessive use of armed force against Palestinians is a major tool manipulated by the IOF, reflective of an increasingly violent and repressive apartheid regime that does not value Palestinian life and rights. It falls within the scope of Article II(a)(ii) of the 1973 Apartheid Convention, namely the “(a) denial to a member […] of a racial group […] of the right to life […] (ii) By the infliction upon the members of a racial group […] of serious bodily or mental harm […]” “for the purpose of establishing and maintaining domination by one racial group of persons […] and systematically oppressing them.” [25] Such act may constitute a crime of apartheid, prosecutable as a crime against humanity under Article 7(1)(j) of the Rome Statute.[26]

[7] Advisory Opinion Concerning Legal Consequences of the Construction of a Wall in the Occupied Palestinian Territory, International Court of Justice, 9 July 2004, https://www.icj-cij.org/public/files/case-related/131/131-20040709-ADV-01-00-EN.pdf