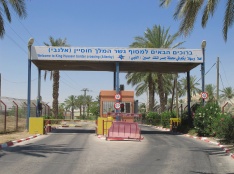 Following a meeting on Thursday 18 March 2021 with the Office of the Prosecutor at the International Criminal Court in The Hague, on Sunday 21 March 2021, Palestine’s Minister of Foreign Affairs and Expatriates, Riad Malki, and his aides, were interrogated by Israeli occupying forces (IOF) at the Israeli military post at the Allenby Bridge crossing point between Palestine and Jordan. As reported by Wafa, Israeli forces, reportedly the Shin Bet, confiscated from the Minister and his aides the VIP card which permits them to avoid the oppressive movement restrictions that Palestinians are subjected to.

Israeli media reported an unnamed ‘senior Israeli official’ as stating that: “No one has limited his freedom of movement,” the official said, “but he is using the extra privileges he received from Israel to seek to prevent the freedom of movement from Israelis as we travel abroad. Did he really expect us just to sit on our hands?” Israeli officials were further reported as stating:

"Against the backdrop of Malki's activities designed to harm Israel, it was decided that there was no basis for al-Maliki to benefit from 'special privileges' for when he crosses borders. It is emphasized that these are 'special privileges', whereas any rights he has as a resident of the PA will remain and nothing regarding them was impinged".

The so-called privileges which the IOF choose to grant to certain Palestinians, and which remain subject to their arbitrary and discriminatory authority, are what international law recognises as fundamental and basic human rights. The rights to which Palestinians have access under occupation, and are not ‘impinged’ by the oppression of the occupation, are minimal, with Palestinian society increasingly fragmented, and subjected to a broad regime of apartheid.

Ambassador Rawan Sulaiman, Permanent Representative of the State of Palestine to the International Criminal Court, issued a statement on 23 March 2021 asserting that:

“We will not be subject to intimidation as we seek justice for victims of atrocity crimes committed in Palestine. Israel, the occupying Power, has consistently been obstructing access to justice and doing all within its power to avoid any form of accountability for the crimes that continue to be committed in the Occupied Palestinian Territory. We will continue our legal and peaceful endeavour to seek accountability for the crimes committed against the Palestinian people. I call on all States Parties to support the integrity, impartiality and independence of the ICC, in light of the threats it, and those cooperating with it, continue to face.”

Wafa further reported that ‘Luxembourg's Foreign Minister Jean Asselborn deeply regretted the retaliatory actions taken by Israeli authorities against Minister of Foreign Affairs and Expatriate Riyad Malki’. On 23 March 2021 Reuters reported that The Netherlands has asked Israel to clarify the status of the Palestinian foreign minister after his travel credentials were revoked, quoting a Dutch foreign ministry spokesperson: “We have raised the matter with the (Israeli) embassy (and) informed them that, as a host country, the Netherlands is very invested in the fact that the ICC must be able to carry out its work without interference”.

A Backdrop of Human Rights Violations

It is against this backdrop that the International Criminal Court has opened an investigation into the Situation in Palestine. As a Palestinian human rights organisation, Al-Haq and its partners in civil society are routinely faced with hostile measures of collective punishment from Israel, which are characterised by a climate of fear and inclusive of a protracted campaign of smears and death threats – all designed to foil, undermine, and deter Palestinian engagement with the International Criminal Court.

In February 2021 Al-Haq, with Addameer Prisoner Support and Human Rights Association and Al Mezan Center for Human Rights, submitted a joint submission to the United Nations Special Rapporteur on the Promotion and Protection of Freedom of Opinion and Expression highlighting Israel’s recent attacks on Palestinian human rights defenders, which included arbitrary arrests, travel bans, and residency revocations, as well as attacks on Palestinian human rights organisations, including raids. The submission further underlined how the Israeli government, through its Ministry of Strategic Affairs and in coordination with government-operated non-governmental organisations, has been leading a systematic, carefully orchestrated, and institutionalised smear and disinformation campaign against Palestinian human rights organisations and defenders, in an attempt to shrink civil society space, and delegitimise, oppress, and dominate them.

On 19 March 2021 Al-Haq and partner organisations submitted a Joint Submission to the United Nations Special Rapporteur on the Situation of Human Rights Defenders on the Long-Term Detention of Human Rights Defenders, which included an outline of Israel’s targeting and detention of Khalida Jarrar, a Palestinian  civil  society  leader,  lawmaker,  and  human  rights  activist who calls for womens’ rights and for the realization of Palestinians’ rights, notably the Palestinian right to return. Khalida Jarrar has been constantly and systematically harassed and targeted by the Israeli occupying authorities for her human rights work, especially in her leading role with regards to work related to the International Criminal Court.

Israel’s repression of peaceful Palestinian advocacy for human rights and for self-determination extends to all spheres of Palestinian society. In the run up to the Palestinian elections scheduled for Summer 2021, Al-Haq has documented and monitored several cases, where potential Palestinian candidates were summoned by Israeli intelligence officers to their offices through telephone calls and threatened not to run for elections or to participate in any relevant activity or they would be arrested. In other instances, IOF accompanied by intelligence officers, raided Palestinian homes and threatened potential candidates not to run for or participate in the election process.

It is imperative that all states, including states party to the Rome Statute, condemn Israel’s unlawful targeting of Palestinians for their engagement with the International Criminal Court in its ongoing investigation into the Situation in Palestine. Palestinians have the right to accountability, and to struggle to bring to an end the root causes underpinning Israel’s disinformation campaign and quashing of freedom of opinion and expression in the OPT, namely an end to the 13-year land and naval closure of the Gaza Strip, an end to the 53-year occupation of the West Bank, including East Jerusalem, and the Gaza Strip, and an end to the 72-year apartheid on both sides of the Green Line.