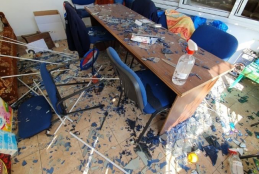 Since the start of the spread of the novel coronavirus (COVID-19) in the Occupied Palestinian Territory (OPT), Israel has continued its systematic, widespread and unlawful policies and practices, violating the rights of Palestinians across both the West Bank, including East Jerusalem, and the Gaza Strip.[1] Israel has failed to protect Palestinian workers in Israel,[2] and Palestinian prisoners and detainees in Israeli detention centres,[3] has continued to deny Palestinians in the Gaza Strip access to healthcare,[4] and continues to systematically neglect healthcare in occupied East Jerusalem.[5]

Human rights experts, including the Special Rapporteur on the situation of human rights in the Palestinian Territory occupied since 1967, Professor Michael Lynk, have urged Israel to “live up to their international legal responsibilities by ensuring that the right to health is fully provided to Palestinians in Gaza and the West Bank, including East Jerusalem, during the COVID-19 pandemic.”[6] Nonetheless, Israel continues to ignore, disrespect, and violate its legal obligations, as Occupying Power.

Between 26 December 2020 and 4 January 2021, the Israeli Occupying Forces (IOF) conducted three military attacks in the vicinity of the Martyr Mohammad al-Durra Children’s Hospital in Gaza city, the Palestine Medical Complex in Ramallah city, and Thabet Thabet Hospital in Toulkarem city, causing damage to the hospitals and putting the lives of Palestinian patients, including COVID-19 patients, and health workers, at risk.

On 26 December 2020, at around 00:40, Israeli warplanes targeted and bombed, with five consecutive missiles, a site, which is located in the middle of a vital civilian populated area, and about 400 meters from al-Durra Children’s Hospital in the al-Tuffah neighbourhood, east of Gaza city. Targeting a populated area, the attack resulted in damage to al-Durra Children’s Hospital, a nearby centre for the rehabilitation of people with disabilities, which serves 60 Palestinians with disabilities, the Gaza Martyrs’ Basic School, an educational centre, a mosque, and a gym. The bombing resulted in severe damage to a plastic factory, adjacent to the targeted place, a factory for filling and packaging soft drinks, an industrial workshop, and a number of shops. The Palestinian Energy and Natural Resources Authority in the Gaza Strip announced, in a press release, that the bombing caused damages to the electricity lines and networks feeding the area, estimating the losses at NIS 70,000 (around USD 22,222).[7] 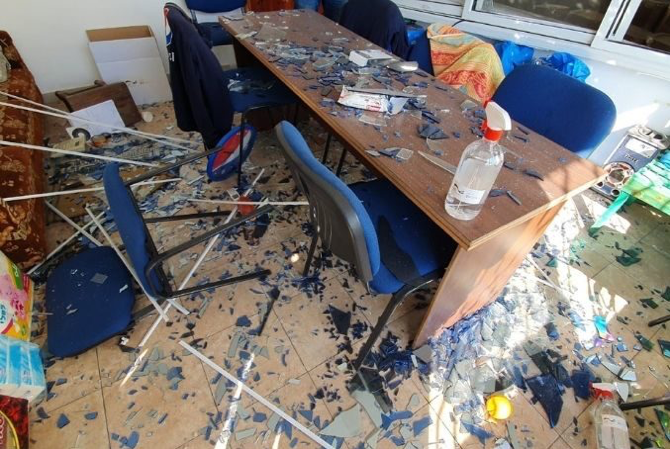 At the time of the attack, 16 children, including three in the intensive care unit, along with their companions, and about 40 medical and administrative staff were present in the hospital. Causing a state of fear and panic for the sick children, their companions, and the hospital staff, the explosion further lead to the cutting of electricity and water to the hospital, and the shattering of the windows of a number of rooms in the hospital. The explosion caused minor injuries to three Palestinians, including a six-year-old girl who was wounded in her left foot as a result of walking on broken glass in her house.

At approximately 04:30 on the following day, 27 December 2020, the IOF raided Ramallah and conducted an attack on the Palestine Medical Complex. About five Israeli military vehicles closed and blocked two entrances to the Palestine Medical Complex, while around five Israeli soldiers fired rubber-coated metal bullets, around 20 tear gas canisters, and ten sound bombs, at the Palestinians present in the hospital’s yard. Around 10-15 Palestinians threw stones at the Israeli occupying soldiers, two of the latter were inside the hospital’s yard.

The attack resulted in the injury of a dozen Palestinians through tear gas inhalation, and the injury of two Palestinians by rubber-coated metal bullets. Fida’ Mahmoud Abd al-Qader, who is in her seventh month of pregnancy, was shot with a rubber-coated metal bullet in her left shoulder by an Israeli soldier, who was on his knee and almost two meters away inside the hospital yard. At the time she was shot, Fida’ was standing on the bridge, which connects two buildings of the complex together. A hospital employee, Mahmoud Omar Zayed, 37, was also shot with a rubber-coated metal bullet in his shoulder, as he was dispersing and accompanying the patients and their companions, who were in yard, away from the Israeli attacks. In his affidavit to Al-Haq, Mahmoud recounted the following:

“… I, together with the security employees of the hospital, started to disperse the patients and their companions, who were in the hospital’s outer yards, to inside of the departments and close the section doors so that tear gas would not continue to spread into the hospital. Knowing that the sections near the entrance were mostly allocated for COVID-19 patients, a number of whom were connected with mechanical ventilators, one of our main concerns was to ensure that tear gas does not reach the patients inside the hospital, as well as to ensure people do not get shot by the Israeli occupying soldiers, and to calm the situation in general. While I was at the yard, dispersing people, and about fifty meters away from the entrance of the Complex, where the soldiers were stationed, I saw the soldiers putting the barrel of their rifles inside the iron gate and firing into the Complex’s yard. I started shouting at the soldiers, in Hebrew, to stop firing at the patients and their companions, and to not fire their bullets at the Complex’s yard. While I was escorting patients, companions, and staff from the yard, a rubber-coated metal bullet, as I assess, went right past me, almost hitting me. After that, I had turned my back to the soldiers and continued what I was doing when a hard object hitting me in my left arm. It was then that I realized that I had been hit by the occupying soldiers.”[8]

The IOF fired tear gas canisters, which hit the windshield of a Palestinian ambulance that was parked at the front of the hospital, damaging and smashing it.

Notably, the sections near the entrance of the Palestine Medical Complex are mostly earmarked and reserved for COVID-19 patients. Due to their poor health, a number of Palestinian COVID-19 patients were connected to mechanical ventilators, close to where the IOF, unnecessarily and disproportionately, fired tear gas canisters.

On 4 January 2020, at around 03:30, the IOF along with eight military jeeps raided a Palestinian house, located to the northeast side of the back of Thabet Thabet Hospital, in Toulkarem city. The raid prompted confrontations with Palestinian youth, who threw stones at the Israeli occupying soldiers. The IOF responded by throwing sound bombs and pursued the stone throwers, who fled into the hospital yards. Palestinian youth continued to throw stones from inside the yard of the hospital, as the Israeli soldiers continued to fire sound bombs. 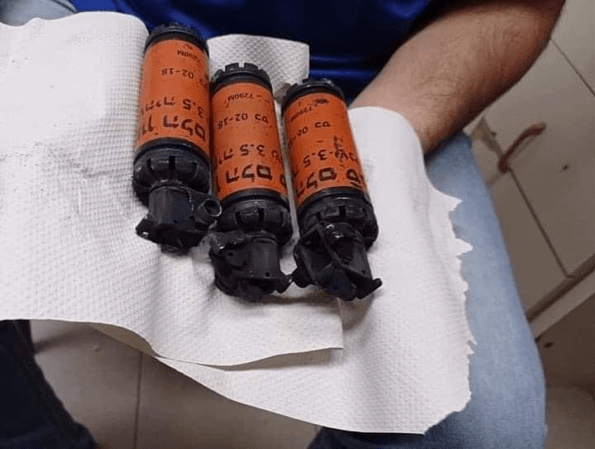 Image of the sound bombs fired in the yard of Thabet Thabet Hospital
4 January 2021, on file with Al-Haq.

One of the Israeli occupying soldiers raided the reception hall, which includes the reception office, laboratory, radiography department, and a number of administrative offices, and fired a sound bomb inside the hall, before withdrawing. Image of the sound bomb fired inside Thabet Thabet Hospital,
4 January 2021, on file with Al-Haq.

According to Al-Haq’s field documentation and investigations, the IOF fired four sound bombs inside Thabet Thabet Hospital, three of which were fired in the hospital’s yard, whereas the fourth one was fired inside its reception hall.

While no physical injuries were reported in the attack, it was conveyed to Al-Haq, by multiple eyewitnesses, that the hospital’s 81 patients, including five children in the paediatrics department, seven patients in the intensive care unit, and 13 women in the maternity ward, their companions, and about 39 medical and administrative staff were terrified by the attack, especially following the explosion of the sound bomb inside the halls of the hospital, which echoed throughout the hospital.

The deliberate targeting of hospitals and health facilities is a serious violation of international humanitarian law. Yet, Israel continues to breach and disregard its legal obligations, as the Occupying Power, to ensure the protection of Palestinian hospitals from attacks. Hospitals enjoy special protection, as stipulated by Article 27 of the Hague Regulations of 1907, reflective of customary international law, which provides that “[i]n sieges and bombardments all necessary steps must be taken to spare, as far as possible, buildings dedicated to religion, art, science, or charitable purposes, historic monuments, hospitals, and places where the sick and wounded are collected, provided they are not being used at the time for military purposes.”[9] Article 18 of the Fourth Geneva Convention of 1949 further stipulates that hospitals “may in no circumstances be the object of attack, but shall at all times be respected and protected by the Parties to the conflict.”[10]

Israel’s firing of five consecutive missiles on a site, which is located about 400 meters away from al-Durra Children’s Hospital, violates the principles of distinction, proportionality, and, precautions in attack, which require that Israel, as the Occupying Power, distinguish between civilian objects and legitimate military objectives and to assess the severity of collateral damage. Article 25 of the Rules of Aerial Warfare requires that all necessary steps are taken to spare, as far as possible, hospitals and other places where the sick and wounded are collected, provided that such buildings, objectives and places are not being used at the same time for military purposes.[11]

While civilian hospitals are generally protected under Article 18 of the Fourth Geneva Convention, Israel has additional obligations to ensure the safety of persons with disabilities and children during armed conflict. In particular, Article 38 of the Convention on the Rights of the Child provides that “States Parties undertake to respect and to ensure respect for rules of international humanitarian law applicable to them in armed conflicts which are relevant to the child.”[12]Article 11 of the Convention on the Rights of Persons with Disabilities requires that states, including Israel, take “all necessary measures to ensure the protection and safety of persons with disabilities in situations of risk, including situations of armed conflict.”[13]

Blatantly violating these norms, Israel’s frequent and recurring attacks on Palestinian hospitals in the OPT demonstrates a continued failure by the Occupying Power to conform and comply with core principles of international humanitarian law for the protection of healthcare.

[2] Al-Haq, “Civil Society Groups Send Appeal to UN Special Procedures on the Rights and Dignity of Palestinian Workers in Israel during COVID-19,” 15 April 2020, available at: https://www.alhaq.org/advocacy/16733.html.

[9] Article 27, of the 1907 Hague Regulations annexed to the Hague Convention IV Respecting the Law and Customs in War on Land.