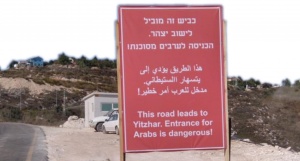 In 1983, the unlawful settlement of Yitzhar was built on top of Jabal (Mount) Salman, on lands belonging to six Palestinian villages in Nablus Governorate: ‘Asira al-Qibliyya, Huwwara, Bourin, Madama, ‘Einabus, and ‘Ourif. Ever since, it has continued to expand on lands belonging to farmers from the six villages, with at least eight settlements built in part on privately owned Palestinian land around Yitzhar settlement.[1] As of 2014, out of the 1,354 dunums that the settlement area covered, 1,321 dunums were appropriated from the six Palestinian villages, in violation of international law.[2] On 7 December 2020, the Israeli Civil Administration delivered notices to the villagers of Bourin and ‘Asira al-Qibliyya with the intention to change the classification of parts of their villages from agricultural to residential lands. By this reclassification, Israel aims at appropriating the land in favour of expanding the Yitzhar settlement and opening roads to serve the settlers.[3]

Illegally transferred in settlers from the Yitzhar settlement are notorious for their frequent violent attacks, and acts of harassments and intimidation against Palestinians, including by the targeting of livestock, agricultural lands and trees, homes, cars, and properties belonging to Palestinians residing in the surrounding villages.[4] Such attacks include beatings, throwing stones, shooting at villagers with live ammunition, torching agricultural lands, trees and cars, uprooting trees, confiscating and pillaging natural resources, including land and water, attacking and suppressing peaceful assemblies, denying access to property and to sources of livelihood, and spray-painting hate speech on cars, walls and other Palestinian properties. Most of these attacks happen under the watchful eye of the Israeli Occupying Forces (IOF), if not actively encouraged by them. The security guard of the Yitzhar settlement, Isaac Levy known as ‘Yaqoub’, is particularly infamous for his role in organising frequent attacks on the six villages and for giving orders to the IOF during the attacks.[5]

The Yitzhar settlers are known for being behind the ‘Price Tag’ attacks against Palestinians since 2008.[6] ‘Price Tag’ attacks are acts of violence and/or vandalism committed by settlers in response to perceived threats on settlement construction and/or expansion in the Occupied Palestinian Territory (OPT), particularly when relevant measures are taken by the Israeli government.[7] ‘Price Tag’ attacks  have resulted in systematic attacks against Palestinians on both sides of the Green Line.[8] The attacks are partially driven by the ideology that “every attack on settler interests should draw a response.”[9] Accordingly, when the IOF attempts to impose restrictions on settlement construction and/or expansion, for the affected settlers - Palestinians ought to pay an additional price.

Between July and October 2020, Al-Haq has documented 68 incidents of settler violence against Palestinians and their properties in the occupied West Bank. The IOF, who are usually present during many of the Yitzhar’s settler attacks, regularly fail to provide any protection to Palestinian civilians under attack, despite their legal obligations to do so.

Following the continuous documentation by Al-Haq of settler violence, this Special Focus presents selected cases from July to October 2020, indicating the severity of violent attacks by the Yitzhar settlers and the gravity of the damage inflicted on Palestinian rights and
livelihoods. The following cases further exemplify Israel’s institutionalised and systematic impunity, showcasing not only how the IOF stand by passively as Palestinians are targeted and attacked by Israeli settlers, but also how they further resort to using force against the targeted Palestinians. 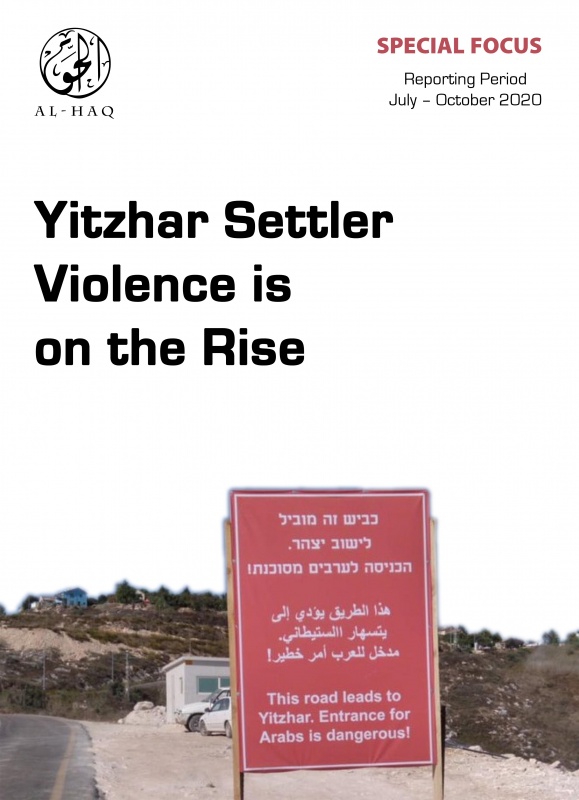 [1] Yesh Din Volunteers for Human Rights, ‘Yitzhar – A Case Study: Settler violence as a vehicle for taking over Palestinian land with state and military backing’ (August 2018) 9.

[5] Information obtained by Al-Haq field researcher on 19 September 2020, on file with Al-Haq.