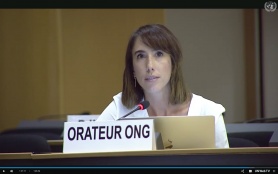 Item 7: Interactive dialogue with the Special Rapporteur on the situation of human rights in the Palestinian territories occupied since 1967

Israel’s collective punishment is manifested through an array of discriminatory policies and practices designed to punish Palestinians, including through punitive house demolitions, residency revocation, mass arbitrary detention, the withholding of Palestinians’ bodies, closures and movement restrictions—the most severe of which has been imposed on the Gaza Strip for the past 13 years—as well as the punitive denial of permits for Palestinians, such as work permits and permits for medical travel, excessively impacting Palestinian patients and their companions in Gaza.

Through collective punishment, Israel seeks to silence opposition and maintain racial oppression and domination over the Palestinian people. We reiterate the Special Rapporteur’s conclusion that “Israel continues to rely upon collective punishment as a prominent instrument in its coercive toolbox of population control”, and our organizations reaffirm that Israel uses collective punishment to establish and maintain apartheid over the Palestinian people as a whole. These policies and practices are not carried out in a vacuum but must be understood within Israel’s broader practices of settler-colonialism.

In 2019, the UN Commission of Inquiry called on Israel to “Lift the blockade on Gaza with immediate effect.” Member States of the Human Rights Council adopted this recommendation in accountability resolution 40/13; however, it remains unimplemented over a year later.

We take this opportunity to remind this Council and its Member States that all High Contracting Parties to the Fourth Geneva Convention have a legal duty to ensure respect for the Convention in all circumstances, including to bring an end to all forms of collective punishment imposed by Israel, and to uphold the inalienable rights of the Palestinian people, including to self-determination and return.