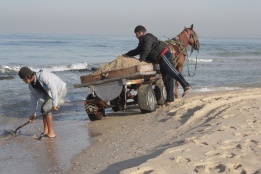 The written statement examined the illegality of Israel’s prolonged closure of the Gaza Strip, which enters its 13th year this June, as repeatedly affirmed by the UN. Notably, in 2013, the UN Secretary-General considered that “the blockade and related restrictions target and impose hardship on the civilian population, effectively penalizing them for acts they have not committed,” therefore amounting to collective punishment in violation of Article 33 of the Fourth Geneva Convention. Moreover, for 13 years, Israel’s closure has undermined all aspects of life in Gaza, denying Palestinians the enjoyment of all rights without discrimination.

The organisations highlighting third State failure to act despite calls by various UN bodies, experts, and officials for Israel’s illegal closure to be lifted, recalling that the UN has repeatedly warned that the Gaza Strip will become uninhabitable by 2020 should Israel fail to lift the closure. Notably, in February 2019, the UN Commission of Inquiry on the 2018 protests in the occupied Palestinian territory recommended that Israel, the occupying Power: “Lift the blockade on Gaza with immediate effect.”[1] On 22 March 2019, Member States of the Human Rights Council adopted the recommendations of the Commission of Inquiry and committed to pursuing their implementation, as mandated by resolution 40/13.

In December 2019, the Committee on the Elimination of Racial Discrimination (CERD) called on Israel to “review its blockade policy and urgently allow and facilitate the rebuilding of homes and civilian infrastructures, ensure access to necessary urgent humanitarian assistance as well as to the right to freedom of movement, housing, education, health, water and sanitation.”[2] CERD also found that Israel’s closure of Gaza is inconsistent with the prohibition on racial segregation and apartheid.

All High Contracting Parties to the Fourth Geneva Convention have a legal duty under Common Article 1 to “respect and to ensure respect for the … Convention in all circumstances,” including to bring an end to all forms of collective punishment imposed by Israel, the occupying Power, over the Palestinian people. Yet, third States have systematically failed to uphold this obligation.

Accordingly, the organisations called on the Council and on all UN Member States to: