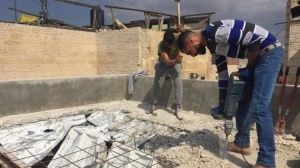 Since 1967, Israel has implemented a demographic engineering policy, aimed at reducing Palestinian presence within the municipal boundaries of Jerusalem. Israel’s discriminatory planning and zoning regime in occupied East Jerusalem is utilized to minimize the Palestinian presence in the occupied city. Palestinians who cannot afford the excessive costs of the permit application or who are from areas since zoned for non-residential purposes, and who are left with no other option but to build without a building permit. These houses are targeted for self-demolition and demolitions by the Israeli authorities, resulting in the forcible displacement of Palestinian families.

1. Family of five demolish their own house

On 12 January 2020, at approximately 8 am, Sayil Ibrahim Ja’abees self-demolished his own home located in the Jabal Al-Mukabir neighborhood in East Jerusalem. The 80-square-meter house, which had been built in 2016 on privately-owned land, is made of iron walls and a cement ceiling, composed of three bedrooms, a living room, kitchen, and bathroom, and was worth approximately NIS 120,000 (about USD 35,000). The house was located approximately 450 meters from the Annexation Wall, about two kilometers from Al-Shayyah checkpoint, and roughly 1.5 kilometers from Al-Sheikh Sa’ad checkpoint. The demolished house was the home of Sayil Ja’abees, 27 and Khawla Ja’abees 24, and their children Nada Ja’abees, 7, Omar Ja’abees, 5 and Jumanah Ja’abees 18 months.

Sayil is the owner of land on which the so-called ‘American Street’ is located, which serves the settlements of Jabal Abu Ghneim and Maali Adumim. Previously, the Israeli authorities appropriated Sayil’s land to construct the street. More of Sayil’s land was appropriated to establish a street for the use of Gihon Water Company - for the purposes of setting up a water refining station.

In 2018, Sayil received a demolition warning, written in Hebrew and posted on his house, stating that the house had been built without a building permit. In early January 2020, Sayil received a demolition order from the Israeli Jerusalem municipality. He was given the “choice” of either demolishing his house within a week or to have the demolition carried out by the Israeli authorities, in which case he would have been required to pay hefty fines for the demolition operation.

Sayil and his family have been left with no other option but to reside in a relative’s house, in the aftermath of the demolition and forcible displacement.

2. Two brothers and their families displaced in occupied East Jerusalem

On 9 January 2020, Maher Al-Hussaini, along with his wife and 9 children, including an infant, and his brother Mohammad Al-Hussaini along with his wife and 2 children, who live close to each other, were forced to demolish their houses that they have been living in for almost 8 and 7 years respectively. The houses were located in the Jabal Al-Mukabir neighborhood in East Jerusalem, approximately one kilometer close to Nof Zion settlement. The construction of each house cost roughly NIS 100,000 (about USD 28,570).

In 2014, the Israeli Jerusalem municipality issued an order for the demolition of Maher and Mohammad’s properties, on the pretext that they were built without a permit. Accordingly, each of the brothers had to pay a fine of approximately NIS 135,000 (about USD 38,571). In addition, each brother had to pay for the expenses of their lawyers, the first being an Israeli lawyer whose services were valued at about NIS 25,000 (roughly USD 7,142) and for another Palestinian lawyer whose services were valued at around NIS 2,000 (about USD 571.5) to appeal the order in the Israeli courts.

3. Two families have their houses demolished before the court hearing

Wafa’ Khalayleh, her husband and their 7 children, and her brother Mohannad Khalayleh, his wife and their two children, who live adjacent to each other, were forcibly displaced when the Israeli Jerusalem municipality ordered and carried out the demolition of their homes. Both of the 100-square-meter houses were constructed in June 2019, each one of the apartments is 100-square-meter and each of the houses is valued at about NIS 200,000 (roughly USD 57,142). The area, in which the owners had built, is designated as “green land” by Israel, meaning that construction is prohibited. As a result, Wafa’ and Mohannad did not apply for a building permit, as it would have been impossible for Palestinians to obtain.

On 1 January 2020 at about 9 am, the Israeli Border Police surrounded the houses of Wafa’ and Mohannad, prevented anyone from approaching, and gave the families 15 minutes to evacuate, before demolishing the houses. Wafa’ and Mohannad received a demolition warning almost five months prior to the demolition. However, they did not receive a demolition order, as their court hearing had been scheduled on 1 January at around 10 am - one hour before the Israeli Border Police surrounded the families houses and to allow for bulldozers to demolish the houses.

Due to the lack of adequate time to evacuate their belongings, most of the families’ belongings were destroyed. Each of the two families paid approximately NIS 30,000 (about USD 8,571.4) in legal expenses. The two families are currently residing with other family members until they find appropriate houses to rent.

Administrative house demolitions, whether they were carried out by the Israeli authorities, or forcibly executed by the Palestinians owners, are illegal under international humanitarian law. Article 46 of the Hague Regulations (1907) provides that private property cannot be confiscated. While Article 53 of the Fourth Geneva Convention provides a narrow exception for the destruction of private property, where this is rendered absolutely necessary by military hostilities.

However Israel’s discriminatory policies and ongoing practice of administrative demolitions is a systematic tactic to forcibly transfer the protected Palestinian population from Jerusalem. Israel’s unlawful policies lead to the destruction Palestinian property, and also contribute to the creation of coercive environments and unbearable living conditions for Palestinians in East Jerusalem, forcing many to leave. Forcible transfer, including through the manipulation of coercive environments to force transfer, may amount to a war crime, and a crime against humanity under Articles 7(1)(d) and 8(2)(a)(vii) of the Rome Statute of the International Criminal Court. Accordingly, Israel is in violation of Article 49 of the Fourth Geneva Convention, which strictly prohibits the forcible transfer of protected persons not justified by military necessity.