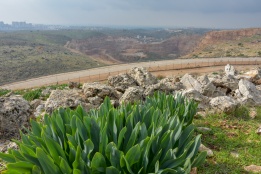 Amsterdam/Ramallah, 4 February 2020 – The German multinational HeidelbergCement is complicit in the pillaging of natural resources from the Nahal Raba quarry in the occupied West Bank, with serious human and environmental rights violations against Palestinians, a new report by SOMO and Al-Haq shows. Palestinian communities are affected by land grabbing, stealing of natural resources, and dust pollution as a resulted of HeidelbergCement’s activities. The company is breaching international law in the Israeli-occupied Palestinian Territory, while avoiding responsibility for the violations it has been involved in.

For more than 13 years, the Nahal Raba quarry, located in Salfit in the West Bank, has denied Palestinian communities’ access to their lands and sources of livelihoods. Moreover, Hanson Israel, the subsidiary of HeidelbergCement operating the quarry, sold products from the quarry to illegal Israeli settlements. The German multinational also pays royalties to the Israeli Civil Administration, the body administering the occupied Palestinian territory. HeidelbergCement’s presence in the area is a clear example of multinational corporations’ involvement in Israel’s prolonged occupation, systemic human rights abuses and the denial of the fundamental right to self-determination and sovereignty over natural resources.

While the German multinational and the State of Israel pocket the profits of depleting the quarry’s ‘white gold’, the Palestinian economy is stripped of millions of dollars annually in this sector. In addition, according to several testimonies, the crushing of stones in the quarry, day and night, comes with loud explosions and covers parts of the neighbouring communities of Al-Zawiya and Rafat with dust, affecting crops and air quality.

Maha Abdallah (Al-Haq): “HeidelbergCement should immediately and responsibly cease all its activities on appropriated Palestinian land and in illegal Israeli settlements, and make reparations to Palestinians affected, including to those whose lands it has - in conjunction with the occupation authorities, unlawfully exploited”.

HeidelbergCement has seemingly deployed a number of strategies to avoid responsibility for its involvement in these human rights violations and grave breaches of international law. The company denies that its operations are on unlawfully confiscated land and hides behind policies and measures imposed by the Occupying Power for the confiscation and exploitation of Palestinian land and natural resources.

The company has structured its transnational corporate group into distinct legal entities and carried out its operations through an Israeli subsidiary which separates a corporation from its owner, thus insulating the parent company from liability. Furthermore, HeidelbergCement continuously tries to legitimise its operations in Nahal Raba with false claims about job opportunities and benefits for Palestinians.

Lydia de Leeuw (SOMO): “The behaviour of HeidelbergCement is not unique. Worldwide we see companies using strategies to avoid responsibility or being held accountable for human rights abuses and environmental damage. We want to motivate duty bearers to close the governance gaps that allow these strategies to be applied.”

Read the full report in English ‘Violations set in stone. HeidelbergCement in the Occupied Palestinian Territory.’

More information, not for publication:

The Centre for Research on Multinational Corporations (SOMO) is a critical, independent, not-for-profit knowledge centre on multinationals. Since 1973, we have investigated multinational corporations and the impact of their activities on people and the environment.

Al-Haq is an independent Palestinian non-governmental human rights organisation based in Ramallah, West Bank. Established in 1979 to protect and promote human rights and the rule of law in the Occupied Palestinian Territory (OPT), the organisation has special consultative status with the United Nations Economic and Social Council.

This report is part of ‘Mind the Gap’ a four-year project involving civil society organisations from 9 countries across the globe, coordinated by SOMO. The overall aim of the project is to increase respect for human rights and effective access to justice and remedy for individuals and communities whose lives and livelihoods have been affected by multinationals.