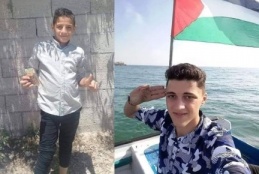 Since 30 March 2018, Palestinians have been protesting against Israel’s prolonged closure of the Gaza Strip, calling for the realization of the right of Palestinian refugees to return, and for an end to Israel’s prolonged occupation, in five return camps across the Gaza Strip, in the Great Return March.[1] The Israeli Occupying Forces (IOF) have responded to the Great Return March protests by using excessive force and lethal force against Palestinian protestors, which have resulted in the killing of 211 Palestinians, including 3 women, 46 children, two journalists, seven persons with disabilities, and four paramedics. Meanwhile, 13,809 of Palestinians have been injured due to the IOF’s excessive and disproportionate use of force against the protestors, including 2,932 children, 233 paramedics and 213 journalists.[2]

On Saturday, 31 August 2019, at approximately 11:00 am, Bader El-Din Nabil Abu Mousa, 25, was pronounced dead at the Gaza European Hospital in Khan Younis due to a bullet wound sustained from IOF live fire the evening before. At around 6:25 pm on Friday, 30 August 2019, Bader El-Din was shot with a live bullet in the left side of the head while participating in the 72nd week of the Great Return March protests east of Khuza'a village, east of Khan Younis in the southern Gaza Strip.

According to Mousa Abed Abu ‘Azab, 31, Bader El-Din’s friend, the two had been participating in the Great Return March protests since 30 March 2018, to assert the right of return and demand an end to the Israeli imposed closure on the Gaza Strip. Initially, Bader El-Din and Mousa were about 70-100 metres away from the fence, and then approached the barbed wire, where they could see Israeli military jeeps and soldiers, positioned atop the hills and dirt mounds, with their guns pointed at the protestors. There, some of the protestors, including Bader El-Din, threw stones and Molotov cocktails at the soldiers and military jeeps, as the soldiers fired live ammunition, rubber-coated metal bullets and tear gas canisters towards them.

At around 6:25 pm, towards the end of the protests and when numbers of people were starting to leave, Mousa recalls seeing an Israeli drone hovering in the sky for visual documentation purposes. Mousa and Bader El-Din crossed the barbed wire, when the IOF opened live fire towards them, injuring Bader El-Din with a live bullet in the head. Bader El-Din fell to the ground on his face and was bleeding from his head profusely. Bader El-Din was then taken to a Palestinian Red Crescent ambulance where they began to treat him. He was then transferred to the Gaza European Hospital in Khan Younis, where he was admitted to the intensive care unit for treatment. At approximately 11:00 am the next day, Bader El-Din was pronounced dead at the hospital.[4] Bader El-Din was from Al-Emirati neighborhood, west of Khan Younis.

On Friday, 6 September 2019, at about 6:05 pm, Ali Sami Al-Ashqar, 17, arrived and was pronounced dead at the Indonesian Hospital in Beit Lahia, from a live bullet shot at him by the IOF. Ali was from the Jabaliya refugee camp in the northern Gaza Strip. At approximately 5:40 pm on Friday, 6 September 2019, Ali was injured with a live bullet during his participation in the 73rd Great Return March in Abu Safia camp, east of the town of Jabaliya in the northern Gaza Strip located a few metres from the separation fence.

Ali was about 40-50 metres away from the first barbed wire fence, which is about 20 metres away from the second fence, opposite the Abu Safiya gate, along with other demonstrators. Some of the youth were throwing stones at an Israeli military jeep near the gate where four armed Israeli soldiers were firing tear gas canisters, rubber bullets and live bullets every now and then at the demonstrators near the fence.

At approximately 5:40 pm, the IOF continued to fire live ammunition and tear gas canisters at the protestors. In the meantime, Ali and Salim Abd Al-Salam Al-Dabaji, 21, walked about 10 metres south from the fence to escape the tear gas. Ali approached Salim, calling “my back… my back”. His hands were on the lower part of the right side of his neck. Salim saw that there was a one-centimeter hole on Ali’s neck from which he was bleeding profusely. Salim checked Ali’s back where he saw another smaller hole from which Ali was also bleeding. In the meantime, white foam was coming out of Ali’s mouth and he ceased breathing. Ali was rushed to the Indonesian Hospital in Beit Lahia by an ambulance, where he was pronounced dead upon arrival.[5]

On Friday, 6 September 2019, at 5:40 pm, doctors pronounced Khaled Abu Bakr Rabie dead due to a live bullet shot at him by the IOF. Khaled, 14, was from Al-Shujai’ya neighborhood in the east of Gaza City. At approximately 5:10 pm on Friday, 6 September 2019, Khaled was injured with a live bullet in the right side while he was participating in the 73rdGreat Return March east of Gaza City. Khaled was about 300 metres from the fence when he was shot in his right side by a live bullet. After numerous attempts to revive him in the field, he was taken to Al-Shifa Hospital in Gaza at approximately 5:35 pm, where he was pronounced dead, at 5:40 pm.

Israel has imposed movement restrictions on the Gaza Strip since the early 1990’s. In June 2007, Israel imposed a land, sea and air blockade on Gaza, claiming “security” concerns.[7] Around 1.8 million Palestinians in Gaza remain ‘locked in’, denied free access to the remainder of the OPT and the outside world. The closure and blockade of the Gaza Strip is a denial of basic human rights in contravention of international human rights treaties and customary law. In particular the killings stand in violation of Article 6 of the International Covenant on Civil and Political Rights (ICCPR), which provides that “every human being has the inherent right to life….No one shall be arbitrarily deprived of his life.”[8] The Israeli-imposed blockade and closure has also severely affected the living conditions in Gaza and made it uninhabitableand further amounting to collective punishment of the civilian Palestinian population.

Moreover, under international law, Palestinians have the right to demonstrate and participate in the Great Return March protests. This right is guaranteed in Articles 19 and 21 of the ICCPR. Article 19 of the ICCPR states that “everyone shall have the right to freedom of expression; this right shall include freedom to seek, receive and impart information and ideas of all kinds, regardless of frontiers, either orally, in writing or in print, in the form of art, or through any other media of his choice.”[9] Meanwhile, Article 21 of the ICCPR grants that “the right of peaceful assembly shall be recognized. No restrictions may be placed on the exercise of this right other than those imposed in conformity with the law and which are necessary in a democratic society in the interests of national security or public safety, public order, the protection of public health or morals or the protection of the rights and freedoms of others.”[10]

Meanwhile, Israel’s disregard for international humanitarian and human rights law has continued to result in civilian casualties, notably during the Great Return March protests since 30 March 2018. The use of excessive force against the Palestinians protestors participating in the Great Return March is unlawful under international human rights laws and humanitarian law. The Basic Principles on the Use of Force and Firearms by Law Enforcement Officials was adopted by the Eighth United Nations Congress on the Prevention of Crime and the Treatment of Offenders and was welcomed by the General Assembly of the UN in resolution 45/166 in 1990.[11] The preamble states, “whereas law enforcement officials have a vital role in the protection of the right to life, liberty and security of the person, as guaranteed in the Universal Declaration of Human Rights and reaffirmed in the International Covenant on Civil and Political Rights.”[12] The IOF’s deliberate and disproportionate excessive use of force against Palestinians does not fulfill the IOF’s obligations in protecting the rights to life, liberty, and security of persons.

The preamble also states, that “article 3 of the Code of Conduct for Law Enforcement Officials provides that law enforcement officials may use force only when strictly necessary and to the extent required for the performance of their duty.”[13] As seen in the cases of Khaled, Ali and Bader El-Din, the use of excessive and lethal force used by the IOF was unnecessary and not required for the performance of their duty. The Basic Principles on the Use of Force and Firearms by Law Enforcement Officials also highlights the importance of protecting the people and preventing the use of excessive force where possible.[14]

On 18 March 2019, The UN Independent Commission of Inquiry on the protests in the Occupied Palestinian Territory presented its findings to the UN Human Rights Council, after investigating the killings and injuries primarily within the context of the Great Return March protests.[15] As noted in the report, the killings of Palestinian protestors within this context were always authorized:

“We noted that a senior Israeli official recently stated to international media that each and every bullet received authorization by an experienced commander. When examining the Israel Defense Forces’ use of live fire against the Palestinian protestors, the Commission, however, found that application of lethal force was in the majority of cases authorized unlawfully. This inevitably led to arbitrary deprivation of life.”[16]

Furthermore, the UN Commission of Inquiry’s report highlights that “there was no justification for Israel’s forces killing and injuring persons who pose no imminent threat of death or serious injury to those around them, including journalists, health workers and children.”[17] Al-Haq calls for the immediate cessation on the use of force and lethal force by Israel and calls on the international community to ensure Israel’s respect for the Geneva Conventions in this regard, including by exercising jurisdiction to prosecute grave breaches.

[11] “UN Basic Principles on the Use of Force and Firearms by Law Enforcement Officials.” Facing Finance, http://www.facing-finance.org/en/database/norms-and-standards/un-basic-principles-on-the-use-of-force-and-firearms-by-law-enforcement-officials/.

[12] “Basic Principles on the Use of Force and Firearms.” OHCHR, https://www.ohchr.org/en/professionalinterest/pages/useofforceandfirearms.aspx.