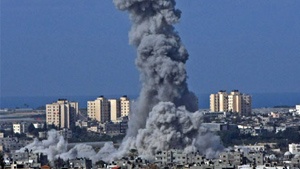 As a human rights organisation dedicated to the promotion and protection of human rights in the Occupied Palestinian Territory (OPT), Al-Haq is gravely concerned about the escalation in violence in the Gaza Strip, which constitutes a serious threat to the life and safety of the civilian population therein.

On Friday 9 March, an Israeli airstrike targeted and killed Zuhair al-Qaissi, the Secretary General of the Popular Resistance Committee (PRC), and his son-in-law Mahmoud Hanini, who had been released in October 2011 in the prisoner exchange between Hamas and Israel. Such killings fuelled a spiral of retaliatory and disproportionate attacks, which lasted four days. According to Al-Haq’s documentation, the Israeli airstrikes have resulted in the death of 25 Palestinians, including five civilians, two of whom were children, as well as the wounding of some 80 people, mainly civilians. At the same time, according to media reports, four Israeli civilians have been injured as a result of the indiscriminate rockets fired by Palestinian militants in the Gaza Strip.

Israeli military operations and the escalation in violence are disproportionately affecting the civilian population in the Gaza Strip. The Gaza Strip, like the rest of the OPT, has been gravely affected by the prolonged Israeli belligerent occupation, the effects of which have been further exacerbated by the illegal regime of closures imposed by Israel since June 2007. The closure of the Gaza Strip, which, as confirmed by the International Committee of the Red Cross, amounts to a form of collective punishment, combined with the long-lasting effects of ‘Operation Cast Lead,’ is already exacting a heavy toll on the civilian population, who are defenceless under Israeli airstrikes.

While a truce has allegedly been reached, it should be borne in mind that, given the impunity enjoyed by Israel in the face of violations committed against civilians, there is no deterrent and as such no guarantee that any such truce will be honoured. The lack of implementation of the recommendations of the UN Fact-Finding Mission Report on the Gaza Conflict has resulted in the de facto sanctioning of Israel’s disproportionate use of force in the Gaza Strip by the international community. Palestinian victims of ‘Operation Cast Lead’, who have yet to receive redress, fear that there is nothing to prevent the crimes of ‘Cast Lead’ from being committed again.

Al-Haq calls on Israel, the Occupying Power, to absolutely refrain from attacking civilian areas and to ensure that the civilian population enjoy the protection that international humanitarian law affords them in times of belligerent occupation. Israeli military attacks in densely populated areas, like the Gaza Strip, must strictly adhere with international humanitarian law, in particular the principles of distinction and proportionality, which entail that an attack be immediately cancelled should the impact on civilians outweigh the military advantage sought. Failure to take the necessary precautions can result in the commission of war crimes.

In the same vein, Palestinian militant groups must refrain from resorting to the use of indiscriminate weapons, as this would also amount to a war crime.

The High Contracting Parties to the Fourth Geneva Convention must uphold their obligation under Common Article 1 to “ensure respect” for the Convention by adopting effective measures to pressure the parties to the conflict to respect international humanitarian law.