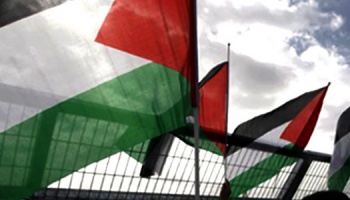 As an organisation dedicated to the promotion and protection of Palestinian human rights, Al-Haq would like to take the opportunity of Palestinian Prisoners’ Day to highlight the ongoing violation of the rights of Palestinians incarcerated in Israeli prisons, many of whom are interned without charge or trial. The continuing ill-treatment of some 4,600 political prisoners, which includes internment, the denial of family and lawyer visits, prolonged periods of isolation, and the lack of fair trial, has largely been overlooked by a wider international community that has grown more and more desensitised to such violations of international law.

To mark the occasion of Prisoners’ Day, Al-Haq has produced a video that elaborates on the experiences of Palestinian prisoners and their families.

Today, some 1,200 Palestinian prisoners are beginning a mass hunger strike to protest their ill-treatment, poor conditions and Israel’s illegal practice of internment. They do so under the banner  "We will live in dignity." There are already 10 Palestinians on hunger strike, including Bilal Diab and Thaer Halahleh, both of whom have refused food for 48 days to protest their indefinite detention without charge or trial. Regrettably, their hunger strike has been completely ignored by the international community.

Al-Haq is particularly concerned with Israel’s widespread practice of internment, also referred to as administrative detention, which constitutes a serious breach of international humanitarian and human rights law. While internment is allowed under international humanitarian law, it must be used only under exceptional circumstances as it infringes upon basic human rights, including right to a fair trial. Indeed, the denial of a fair trial constitutes a ‘grave breach’ of the Fourth Geneva Convention, one of the most serious forms of war crimes. Furthermore, the UN Committee on the Elimination of Racial Discrimination recently urged Israel to immediately end its practice of administrative detention. This form of arbitrary arrest also contravenes Articles 9 and 14 of the International Covenant on Civil and Political Rights.

At present, instead of being used in exceptional circumstances only, administrative detention is used with regularity by Israel as a means of suppression, with some 322 Palestinians currently detained under this practice. This number has increased from 218 since this day in 2011.

The arbitrary nature of this practice is illustrated by the fact that Khader Adnan is scheduled to be released today. However, there is no guarantee that this will take place, and, as past experience has shown, he could instead be given another administrative detention order or have his release postponed indefinitely at the whim of the Israeli military authorities.

In the context of the mass hunger strike of Palestinian political prisoners, Al-Haq: