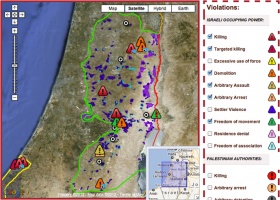 Al-Haq’s new interactive map illustrates the widespread nature of violations of human rights in the West Bank and the Gaza Strip as reported in Al-Haq’s recently issued Field Report for July - December 2011.

Human rights violations are perpetrated on a daily basis in the Occupied Palestinian Territory (OPT). Al-Haq’s interactive map and field report cover a sample of these violations that are investigated by our monitoring and documentation department. They also provide comprehensive statistics of killings, house demolitions, curfews, and deportations in the West Bank from September 2000 to December 2011 and killings in the Gaza Strip from February 2009 to December 2011.

For the second half of 2011, Al-Haq highlighted a trend of civilian casualties during Israeli air raids on the Gaza Strip. In one of the documented cases, a 13-year-old boy was killed during an air raid by Israeli forces. Another case left two farmers dead as they were collecting their crops from an agricultural field near the buffer zone area.

Also highlighted on the map are violations relating to the excessive use of force; physical assault; and the right to freedom of movement and freedom of association.