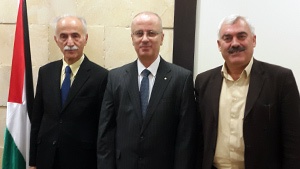 After its mission to Gaza and the West Bank from 23 October to 1 November, FIDH has painted an alarming picture of the human rights situation. The tragic effects of the Protective Edge operation in Gaza and the daily discrimination against the Palestinians throughout the Occupied Palestinian Territory combined with growing settlement extension in the West Bank are flagrant illustrations of the Israeli government's total lack of will to find a negotiated solution.

The growing tension observed during the last few days in Jerusalem and the political reactions that they triggered reflect a climate of mistrust and persistent political deadlock.

"The only equal to the suffering endured by the Palestinians is the daily injustice they are subjected to. Decades of impunity and Israel's total disregard for international law and its international obligations are major obstacles to peace", said Karim Lahidji, FIDH President at the end of his meeting with the Palestinian President, Mahmoud Abbas in Ramallah on 31 October 2014.

There is no doubt that Israeli forces committed international crimes during the Protective Edge operation in no way proportionate to the firing of missiles and rockets from the Gaza strip. FIDH during its mission in Gaza took note of the large number of civilian victims and the extent of the damage in Gaza. Whole districts were destroyed during the bombings and civilian infrastructures were clearly targeted. This tends to demonstrate the indiscriminate and even systematic character of the attacks.

Together with its member organisations in the Gaza strip, (Al Haq, El Mezan and the Palestinian Center for Human Rights), FIDH documented several cases of destruction of civilian infrastructure during the raids by the Israeli defence forces in summer 2014.

The delegation went on several field visits and met with Palestinian human rights NGOs that systematically document the situation on the ground , and with several international humanitarian institutions.

In the West Bank, the situation is just as alarming. Recent statements announcing that Israel would take over vast areas of occupied territory in the West Bank south of Jerusalem is causing great tension. This appropriation is leading to the construction of new, fairly large settlements near the city of Bethlehem, again in flagrant violation of international law.

The development of new settlements in the OPT is also leading to the establishment of separate, discriminatory legal practices and regimes for the Palestinians. Throughout the West Bank and especially in Hebron, FIDH witnessed that settlers - under close military protection- benefited from better treatment than the Palestinians notably in terms of freedom of movement (certain roads are reserved exclusively for them) and construction permits. Violent acts perpetrated by settlers against Palestinian civilians are regularly reported and those responsible are rarely hold accountable.

In East Jerusalem, Palestinians are confronted with regulations that restrict their right of free movement and of residence. Furthermore, the Palestinian residents' applications for construction permits are nearly systematically rejected, and hence their "illegal" homes are often demolished. The FIDH delegation witnessed that these demolitions occurred daily.

The FIDH fact-finding mission in Gaza was followed by an advocacy mission led by FIDH President, Karim Lahidji. He was supposed to go to Gaza but his entry permit was granted late. He was, however, able to visit Hebron, Bethlehem and Jerusalem where he met with several FIDH member organisations. He then went to Ramallah accompanied by Shawan Jabareen, FIDH Vice President and General Director of Al Haq, to meet with the Palestinian authorities and members of the civil society.

During the meetings with the Palestinian authorities and particularly with President Abbas, FIDH brought up the challenges for the Palestinian government to carry out the processes of the rule of law and to strengthen Palestine's international commitments by carrying out the reforms needed at the national level. FIDH particularly emphasised the importance for Palestine to call on the International Criminal Court to exercise its jurisdiction and to ratify the Rome Statute. FIDH also spoke out in favour of an urgent meeting of the High Contracting Parties to the Geneva Conventions, awaited by Palestine with the objective of calling on the concerned States to take concrete steps to meet their legal obligations under the international humanitarian law.