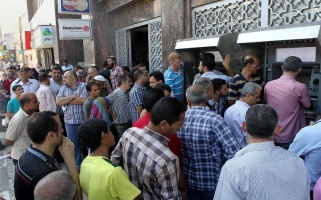 The measures taken by the Palestinian Authority to cut the salaries of public sector employees in the Gaza Strip, and other measures that have affected the residents of the Gaza Strip since March 2017, began with the announcement of the formation of the administrative committee to manage the situation in the Gaza Strip. This derived from the continued failure of the internal reconciliation efforts, in an attempt to pressure Hamas to end its control over Gaza.

In light of this, President Mahmoud Abbas announced a series of measures that have been implemented in the Gaza Strip since April 2017. The most prominent of these is the measure taken by the Ministry of Finance to deduct 30 to 35 per cent of the salaries of all employees in the Gaza Strip (about 62,000 employees), the termination of certain functional financial benefits such as supervisory bonus for employees, transportation allowance, and social allowance, and the reduction of patient referrals for medical treatment outside of the Gaza Strip by a large percentage (about 80 per cent of the referrals usually given in the Gaza Strip, including for cancer patients and patients suffering other serious diseases). Measures have also included halting the supply of electricity to Gaza’s power plant, leading to severe power cuts for long hours, in the context of Israel’s prolonged closure of the Gaza Strip, which has created a crisis and violates a vast spectrum of civil, political, economic, social, and cultural rights to which Palestinians in the Gaza Strip are entitled, including their right to dignity.

These measures taken by the President and the Palestinian Government, were adopted without a Law by Decree or presidential decree or Government decision, and were met with wide-ranging objections by Palestinian civil society organizations for violating the provisions of the Palestinian Basic Law (Interim Constitution), in particular Article 9, which prohibits discrimination between Palestinians. Al-Haq has stated that the above measures amount to discrimination on a geographical basis, as they solely target Palestinian employees in the Gaza Strip and employees from the Gaza Strip residing in the West Bank. The measures further violate economic and social rights enshrined in international human rights treaties to which the State of Palestine has acceded.

It should be noted that Al-Haq’s field documentation and follow-up indicate that banks have complained about the measures taken against employees in the Gaza Strip, in particular since the proportion of employees who are borrowers from banks is at around 78 per cent. As such, the inability to collect the instalments and benefits of loans and bank commissions has had a direct impact on banking operations.

Al-Haq’s follow-up further shows that following the decision by the Palestinian Ministry of Finance to transfer only 50 per cent of the total salary to the bank accounts of Gaza employees, the amount actually transferred is that of 50 per cent after the deduction made since April 2017 to reduce 30 to 35 per cent of the employees’ total salary.

Meanwhile, 5,598 new jobs were officially approved in the general budget of the State of Palestine for the fiscal year 2018. It is to be noted that the Ministry of Finance and the Palestinian Government still refuse to present the general budget for public debate before its approval, in the absence of the Palestinian Legislative Council, despite the many requests by civil society organizations for the need to discuss the budget before its approval. The Ministry of Finance and the Government continue to ignore the demands by civil society in this regard. Despite the fact that one of the scenarios of the 2018 general budget indicated the possibility of appointing 20,000 employees in the Gaza Strip under the banner “Additional Budget for the Southern Governorates”, the situation on the ground shows that the appointments are confined to the West Bank only without the Gaza Strip, bearing in mind that new civil service appointments in the Gaza Strip have been suspended since 2007 and that the average age of employees in the Gaza Strip is over 40 years.

In addition, in relation to the absence of transparency, there are many laws by decree that have been passed and are under discussion by the Council of Ministers, approved by the President, and published in the Official Gazette (Palestinian Chronicles) in a manner that appears to be confidential and without public debate, despite their importance and impact on the state of human rights and fundamental freedoms, such as the Law by Decree on Cybercrimes, amendments to the Law by Decree on the Supreme Constitutional Court, and the Law by Decree on the High Criminal Court.

It should also be noted that the concept of tamkin or “empowerment”, which the President and the Prime Minister have repeatedly emphasized, continues to raise serious problems between the Palestinian leadership and Hamas since their October 2017 agreement.

Together with civil society organizations, Al-Haq has closely followed the measures taken by the State of Palestine in the Gaza Strip, including the cutting of employees’ salaries, and has issued a number of statements and position papers, met with State officials, and organised lobbying and human rights advocacy campaigns. Al-Haq views these procedures as lacking in transparency as no law, decree, presidential decree, regulation, or Government decision was issued to provide them with legal grounds or justifications.

The actions taken against employees in the Gaza Strip and staff from Gaza residing in the West Bank further involve discrimination on a geographical basis, in violation of Article 9 of the amended Palestinian Basic Law, which explicitly states that Palestinians are equal before the law and prohibits discrimination between them.

These measures also contravene the Law on the Organization of the General Budget and Financial Affairs No. (7) of 1998 and its amendments, which does not permit the Minister of Finance or the Government not to transfer the salaries of employees of the Gaza Strip, as this action constitutes a violation of the implementation stage of the general budget and has no basis under the abovementioned law. Moreover, the measure constitutes a violation of the provisions of the Civil Service Law No. (4) of 1998 and its amendments and executive regulations, as there is no legal basis in the said law for deducting salaries of employees in the Gaza Strip by 30 to 35 per cent, a measure which is still ongoing.

The Law by Decree on the Early Retirement of Civil Servants No. 17 of 2017 and the Law by Decree on the Early Retirement of Palestinian Security Forces No. 9 of 2017, both issued by President Mahmoud Abbas based on Article 43 of the Palestinian Basic Law in light of the continued absence of the Palestinian Legislative Council, have not been subject to public debate. Both were met by objections from Al-Haq and civil society organizations, as they are in violation of the National Policy Agenda adopted by the Palestinian Government for the years 2017-2022 and titled “Putting Citizens First”, in light of the secrecy surrounding the laws by decree discussed by the Government, approved by President Mahmoud Abbas, and officially published.

Moreover, these laws by decree are contrary to the constitutional provisions of Article 43 of the Basic Law, by which the President is bound, because the said constitutional provision requires a “state of necessity that can not be delayed” to be valid, whereas such a condition is not available in these cases. This is in addition to the absence of any grounds and objective and measurable criteria in these two laws by decree, upon which the referral of thousands of employees in the Gaza Strip to forced early retirement was carried out.

It should be noted that the Law by Decree on the Early Retirement for Civil Servants No. 17 of 2017 and the Law by Decree on the Early Retirement of Palestinian Security Forces No. 9 of 2017, have been used recently since February 2018 to refer some 200 civil servants in the West Bank to forced early retirement, and to dismiss an undetermined number of cases which Al-Haq continues to monitor. These include military personnel, in particular of the National Security Service, the police, and the Civil Defense, who have been forced into early retirement.

Palestine was accorded non-member observer State status at the United Nations (UN) General Assembly in 2012 and has since 2014 acceded to a number of international treaties without reservations, notably core international human rights conventions. These include the International Covenant on Civil and Political Rights (ICCPR), the International Covenant on Economic, Social and Cultural Rights (ICESCR), the Convention on the Elimination of All Forms of Discrimination Against Women (CEDAW), the Convention on the Rights of the Child (CRC), and the Convention on the Rights of Persons with Disabilities (CRPD). The State of Palestine has made a commitment to enforce these international treaties in the West Bank and Gaza Strip at the level of its legislation and public policies, and in practical application on the ground, without reservations. As a result, the measures taken in the Gaza Strip, in addition to violating Palestinian law, also constitute violations of the international treaties to which the State of Palestine has acceded without reservations.

Any statements to the contrary, regardless of the reasons and justifications provided, would ultimately lead to the erroneous conclusion that international law and specifically international human rights treaties, to which the State of Palestine has acceded, only apply to the West Bank but not the Gaza Strip.

The Gaza Strip continues to face a grave crisis on all levels, for which Israel, the Occupying Power, bears the primary responsibility as a result of its prolonged occupation of the Palestinian territory and the unlawful closure it has imposed on the Gaza Strip for over a decade. Accordingly, the High Contracting Parties to the Geneva Conventions are under an obligation to assume their responsibilities vis-à-vis the protected Palestinian population in the Gaza Strip and the West Bank in line with their obligation under Common Article 1 of the Fourth Geneva Convention, according to which they have undertaken to “respect and to ensure respect for the present Convention in all circumstances.” (emphasis added)

We stand before a serious affront to human dignity in the Gaza Strip, which affects some two million Palestinian citizens, including women, children, the elderly, and entire families, including those still forced to live in the open without shelter. The cutting of salaries of public sector employees affects the main and often only source of income of thousands of families in the Gaza Strip, along with relief assistance provided by the UN Relief and Works Agency for Palestine Refugees in the Near East (UNRWA), which is currently facing one of its most difficult funding crises yet. The series of measures taken by the State of Palestine in the Gaza Strip contributes to further deterioration in the already explosive situation therein and may lead to further increases in crime rates and domestic violence, which are already elevated as a result of rampant poverty, unemployment, destitution, loss of livelihood, deterioration of social and health conditions, and the destruction of the economy of the Gaza Strip, which remains under prolonged Israeli occupation and continues to suffer from the scourge of the Israeli-imposed closure.