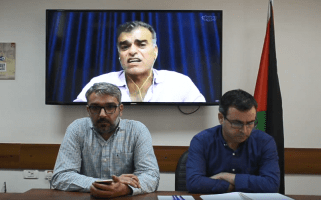 Monday, 14 May 2018: the Palestinian Human Rights Organizations Council (PHROC) held an urgent press conference to address Israel’s continuing and intensified use of lethal force against Palestinians in the Gaza Strip which led to the killing of 58 Palestinians, including 43 civilians, of whom six were children, by the Israeli Occupying Forces(IOF) on 14 May 2018. The press conference also touched upon the United States (US) relocation of its embassy to Jerusalem, disregarding Jerusalem’s internationally recognized legal status under international law.

Mr. Samir Zaqout from Al Mezan Center for Human Rights provided updates on the latest developments in the Gaza Strip in light of Israel’s continued brutal repression of the Great Return March protests. Mr. Zaqout emphasized that since the early morning hours of Monday 14 May 2018, the IOF continued to use excessive and lethal force against peaceful Palestinian protestors across all governorates of Gaza. Al Mezan also pointed out the premeditated and intentional use of excessive and lethal force, including live ammunition, to maximize the number of casualties amongst peaceful protesters. This is evidenced by the preparations carried out by the IOF in the early hours of the day, which included the leveling of sand hills formed by Palestinians to shield protestors from Israeli bullets and gas grenades.

Mr. Tahseen Elayyan from Al-Haq affirmed that Israel’s premeditated violent repression of the Great Return March protests aims to suppress any attempts by Palestinians to demand and realize their right of return and to self-determination. The IOF’s measures and policies in Gaza, in light of the longstanding impunity, tests both international law, and the international community’s commitment to hold Israel accountable for violations of international law, which amount to war crimes and crimes against humanity. The failure to intervene to bring to an end Israel’s human rights abuses against the Palestinian protected population are in conflict with third States responsibilities under the Fourth Geneva Convention.

Mr. Mahmoud Al-Franji from PHROC reiterated that by moving its embassy to Jerusalem, the US endorses Israel's policies that undermine Palestinians’ fundamental human rights, including the fundamental right to self-determination, to life, to freedom of movement, and to dignity.

PHROC further emphasized that the IOF’s deliberate and systematic disregard for international humanitarian and human rights law stems from Israel’s longstanding impunity for widespread human rights violations, including grave breaches of the Fourth Geneva Convention, embodied in the failure of third States to hold Israel accountable for crimes committed in the Occupied Palestinian Territory (OPT). PHROC further called upon Israel to immediately lift the siege imposed on the Gaza Strip, and the international community and its bodies to ensure the protection of the Palestinian population in light of Israel’s escalating violations of human rights. Stressing on the importance of accountability, PHROC called on the Office of the Prosecutor of the International Criminal Court (ICC) to open an investigation into the IOF’s wilfull killing and injury of Palestinians in the Gaza Strip since the beginning of the Great Return March protests on 30 March 2018.

PHROC noted that, along with Adalah, it sent letters to member States of the United Nations (UN) Security Council, urging them to take concrete measures to protect the Palestinian population in Gaza, and to lift the unlawful closure. The letters further called on UN Security Council Member States to: