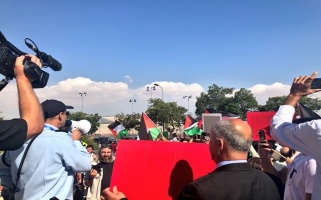 On Tuesday, 15 May 2018, the United States (US) relocated its embassy to Israeli annexed West Jerusalem, on territory whose title is reserved for final status negotiations and over which Israel does not have sovereign rights. Israel violently quashed peaceful protests and prevented protestors from peacefully assembling. Approximately 200 – 250 people gathered in protest against the US embassy opening, which contravenes United Nations General Assembly and Security Council resolutions which reserve the status of Jerusalem as a corpus separatum for final status negotiations.

Armed Israeli forces, including police and border police, attempted to silence protests, particularly Palestinian protestors, by stalling buses travelling to the location of the embassy. Israeli police took pictures and videos of Palestinian participants who wanted to board the buses traveling to the embassy location, and documented bus drivers’ licenses and registration numbers and prevented buses from leaving. In addition, the Israeli police threatened to document the ID numbers and names of those boarding the buses. In Jerusalem, Palestinians have a ‘permanent residency’ status, which Israel can revoke at will, for considerations including incitement to ‘terrorism’, so loosely defined as to cover almost any charge.[1] The collection of Palestinian ID numbers was intended to have a chilling effect and prevent Palestinians from travelling to the embassy area, for fear their residency status might be revoked, whereupon they would become stateless.

During the embassy protests, Israeli police charged aggressively through the crowds and violently forced Palestinian flags and protest messages from the hands of peaceful protestors, who gathered, chanting and holding signs. Al-Haq documented an incident where a woman holding a Palestinian flag was punched in the stomach by the Israeli police. The confiscation of protest materials, including Palestinian flags, violates the rights of Palestinians in Jerusalem to peacefully assemble and to freedom of expression of their political opinions.

Israeli police separated the crowds with security barriers, while Israeli residents in the area sprayed protestors with water and yelled at and aggressively attempted to provoke Palestinian protestors – all while the Israeli police stood back and deliberately did not intervene to stop confrontations. Throughout the protest, Israeli forces arrested 10-15 young Palestinians, after attacking and beating them. 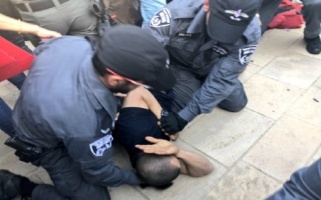 [1] Prime Ministers Office, Security Cabinet Approves Series of Additional Measures to Deal with the Wave of Terrorism (14 October 2015), available at: http://www.hamoked.org/files/2015/1159861_eng.pdf. See also, HCJ 1635/16, Abu Kaf et al. v. Government of Israel et al. Petition for Order Nisi; Proposed Article 11(1)(e), Bill for the Entry into Israel Law (Amendment – Cancellation of Visa and Permanent Residence Permits of Terrorists and their Families after their Participation in Terrorist Activities) – 2016 [5776]. Submitted to the Knesset Chairman and deputies and presented to the Knesset table on the date of 21 March 2016 [11 Adar II, 5776].