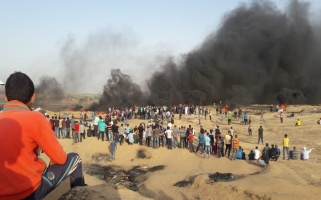 Since the start of the Great Return March over nine weeks ago, the Israeli occupying forces have killed 129 Palestinians, including 96 in protests, and injured thousands of others, of which a number are in critical condition. Amongst those killed in protests, seven Palestinians have died of injuries sustained by Israeli fire on 14 May 2018 and 15 May 2018, when Palestinians marked 70 years since the Nakba and seven decades of ongoing refugeehood and displacement. The seven Palestinians who died from injuries are:

As the United Nations Human Rights Council convened its 28th special session on Friday, 18 May 2018, to address Israel’s repeated assaults on Palestinians in Gaza, the Great Return March continued for the eighth consecutive week. On Friday, 18 May, some ten thousand Palestinians gathered once again around the return camp tents set up since 30 March 2018 along the eastern areas of the Gaza Strip, with men, women, children, and the elderly peacefully demonstrating for an end to Israel’s unlawful closure of the Gaza Strip and the realisation of their right of return, as mandated by international law.

Some protesters approached Gaza’s eastern fence to a distance of 100 to 150 metres, with the Israeli occupying forces located some 30 to 60 metres beyond the fence on the other side, positioned behind sand hills and inside military jeeps, while shooting live ammunition and rubber-coated metal bullets and firing gas canisters directly at the crowds of protesters. On Friday, 18 May 2018, the Israeli occupying forces injured 56 Palestinians, 15 of them by live ammunition and the others as a result of direct gas canister hits and exposure to gas.

Amongst the injured were two children and two journalists, including Reuters photojournalist Bassam Mas’oud, who was directly hit by a gas canister in the head during his coverage of the demonstrations east of Khuza’a, east of Khan Younis, and freelance journalist Majdi Qreiqa’, who was injured by a gas canister in the right leg during his coverage of the protests east of Al-Zaitoun area, east of Gaza City.[1] 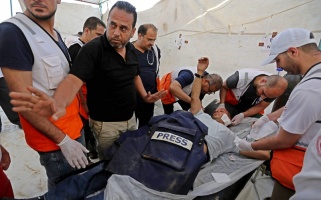 On Friday, 25 May 2018, between 4:30 pm and 7:30 pm, the Israeli occupying forces again targeted peaceful Palestinian demonstrators participating in the Great Return March in all Governorates of the Gaza Strip, for the ninth consecutive week. Israeli soldiers continued to use excessive force against peaceful protesters, positioned behind sand hills elevated above ground level and inside military jeeps, some 30 to 60 meters beyond the main fence, opposite the five protest locations in the eastern Gaza Strip.

Hundreds of Palestinian demonstrators gathered once again around the return camp tents, including children, women, and the elderly, who raised Palestinian flags and chanted national slogans, demanding an end to Israel’s unlawful closure and the realisation of their right of return. Some protesters approached the fence at a distance of 100 to 150 meters and threw stones at Israeli soldiers behind it, while not posing any imminent threat to their lives. Israeli soldiers shot live ammunition and fired gas canisters directly at the protesters, while gas canisters were also dropped within and around the return camp areas. Overall 109 Palestinians, including seven children, and four women were injured. 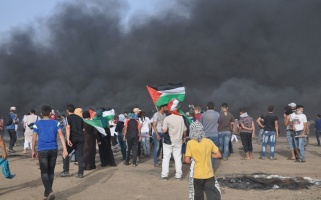