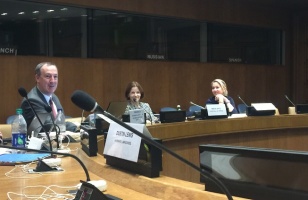 On Thursday, 18 October 2018, Al-Haq presented a paper on “Corporate Accountability for Natural Resource Exploitation in the Draft Principles on the Protection of the Environment during Occupation” at a Seminar on Protection of the Environment in Relation to Armed Conflict, in Conference Room 8, at the United Nations headquarters in New York to experts and United Nations (Sixth Committee) delegates. The International Law Commission’s Fourth Report, by United Nations Special Rapporteur Marja Lehto, is the first thematic report examining belligerent occupation.

Notably, the 18 Draft Principles adopted to date cover the whole cycle of armed conflict, whereas the three latest Draft Principles 19 – 21, specifically address the protection of the environment during belligerent occupation including, the general administrative obligation of the belligerent occupant, the protection of natural resources and the obligation to operate with due diligence. Among the questions addressed by the International Law Commission in its forthcoming report, include, the question of norms protecting the environment during non-international armed conflict, responsibility and liability for environmental harm, and the consolidation of a complete set of Draft Principles.

The seminar was jointly organized by the Mission of Finland, the Law Interest Group of the Environmental Peacebuilding Association, UN Environment, Lund University, and the Environmental Law Institute, to discuss issues that are of relevance for inclusion into the next report, of the International Law Commission on the which would be the last one before the first reading.

Al-Haq underscored that a central feature of Israel’s belligerent occupation of Palestine is the permanent nature of the settlement construction, sustained by Israeli and international corporations. Much of the environmental damage in the OPT is caused by corporations operating unconstrained in industrial and agricultural settlements. The paper highlighted the environmental impacts of Israeli chemical companies operating in the territory such as Geshuri, corporations involved in exploiting non renewable quarries including Heidelberg Cement and Cemex, cosmetic companies Ahava Dead Sea Laboratories Ltd., and Hong Kong registered company Fosun Group and their unlawful mining of Dead Sea mud and minerals and the environmental impact of oil and gas companies extractive activities in contiguous oil and gas resources, such as Noble Energy.

Al-Haq warned that excessive usufructs amount to the war crime of pillage, and urged the commentaries to examine the issue of liability, of state, third state and non-state actors, including corporations who through their acts or omissions pursue unsustainable practices or cause environmental harm.