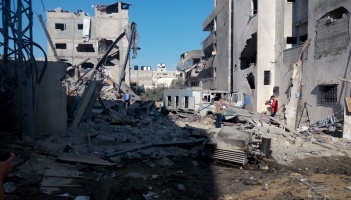 Between 11 and 13 November 2018, the Israeli Occupying Forces (IOF) instigated and conducted a number of intensive raids and attacks in locations throughout the Gaza Strip, killing 14 Palestinians, including two civilians, and injuring at least 44. The injured included 35 men, four women and five children. According to Al-Haq’s preliminary field documentation, on the evening of 11 November, seven Palestinians were killed, and seven others injured, during a raid by an Israeli undercover unit in Abasan Al-Kabira, east of Khan Younis, approximately three kilometres away from the fence. During the raid, Nour Addin Muhammad Baraka, 37, a commander in the Al-Qassam Military Brigades was killed by the IOF unit, after which members of the Palestinian resistance exchanged fire with the Israeli force there. As the Israeli unit was retreating from the location, and for about two hours, a number of missiles and bullets were fired by Israeli warplanes at different locations in the east of Khan Younis, killing six members of the resistance, including Muhammad Majed Al-Qarra, 23, Khaled Muhammad Qeder, 29, Mustafa Hassan Abu Odeh, 21, Mahmoud Atallah Misbeh, 25, Aladdin Fawzi Fseifis, 19, and Omar Naji Abu Khater, 21, and injuring seven others. The Israeli army later announced that one undercover soldier was killed, while another was injured.[1] In response to the IOF’s attack, the Palestinian resistance launched missiles targeting various Israeli locations surrounding the Gaza Strip.

On Monday, 12 November 2018, Israeli forces carried out a series of intensive raids and missile attacks against various locations and buildings, including residential buildings, in the Gaza Strip, killing two resistance fighters, including Hamad Muhammad Al-Nahal, 23, and Mousa Iyad Abd Al-‘Al, 22. On the same day, the IOF launched a missile on a site belonging to the Abu Ali Mustafa Brigades, the armed wing of the Popular Front for the Liberation of Palestine (PFLP), in Beit Lahia, in the North Gaza Governorate, killing Muhammad Zakaria Al-Tattari, 27, and Muhammad Zuhdi Odeh, 22.

Israel’s barrage of missiles launched on the Gaza Strip continued until the morning of Tuesday, 13 November 2018, killing three more Palestinians. Khaled Riyad Al-Sultan, 25, was killed when the Israeli forces struck a missile on an agricultural land in Beit Lahia, killing him and injuring an eight-year-old. Meanwhile, Mosab Saeed Hawas, 21, was killed following an Israeli missile that struck a group of residents in Al-Awda Refugee Camp. On Tuesday, 13 November, at approximately 3:50 pm, Khaled Akram Ma’rouf, 29, a resistance fighter, was killed as the IOF targeted him and other resistance fighters with missiles in Beit Lahia, in the northern Gaza Strip. 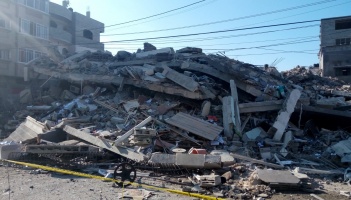 Amongst the buildings targeted in Gaza was the headquarters of Al-Aqsa TV Station, north of Gaza city. Prior to the attack, at approximately 8:40 pm, the employees of the station were ordered to evacuate within five minutes by the IOF. The building was struck with nine consecutive reconnaissance missiles and three F-16 missiles. The four-storey building was destroyed, while two neighbouring houses were severely damaged as a result. In addition, the five-storey Al-Rahma building, which houses offices for Hamas, was struck with nine reconnaissance missiles and two F-16 missiles. The Al-Amal Hotel building, consisting of five stories within a crowded residential neighbourhood, located west of Gaza city, which was recently used by the Palestinian security apparatus, was targeted with eight missiles. The five-storey Al-Yazji building in Gaza city, housing 18 residential apartments, a gym and a clothes shop, was also targeted by a round of missiles, destroying it and damaging neighbouring buildings. Moreover, residential houses were also targeted, including the residence of Talaat Qassem Abu Naji, located in Gaza city; the residence of Rashed Odeh Al-Aidi, north of Gaza city; the residence of Muhammad Abu Dheir, north of Rafah city; and the residence of Nasrallah Suleiman Al-Brim, east of Khan Younis. 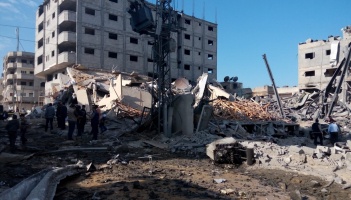 In particular, Al-Haq is gravely concerned with the IOF’s targeting of residential buildings, including the Al-Aqsa TV Station headquarters and Al-Rahma building. Civilian property will only become a legitimate military objective if by its nature, location, purpose, or use it would make an effective contribution to military action.[2] On 12 November 2018, an Israeli army spokesperson reported that Al-Aqsa TV was targeted for attack due to broadcasts, which the army considered “violent propaganda against the State of Israel and its civilians, and provides detail on methods and instructions [on] how to carry out attacks against civilians and IDF soldiers, how to obtain weapons and how to disrupt the IDF’s activities to locate terrorists”.[3] Al-Haq stresses that reasons of propaganda and bias are not sufficient to elevate the news station to a legitimate military objective. Rather, to meet this threshold the station would need to make an “effective contribution to military action” as a military communications network.[4]

Even so, an attack, which “may be expected to cause incidental loss to civilian life, injury to civilians, damage to civilian objects, or a combination thereof” will be considered excessive in relation to the direct and anticipated military advantage and therefore an unlawful and disproportionate use of force.[5] In this respect, and at a minimum, the excessive shelling of the residential buildings, the Al-Aqsa TV Station headquarters, Al-Rahma building, Al-Amal Hotel building and Al-Yazji building, leading to their complete destruction, may be considered a disproportionate excessive incidental loss to civilian property. Al-Haq further notes that the shelling of Al-Amal Hotel building also resulted in damages to Al Mezan Center for Human Rights’ office in Gaza as well as surrounding residential buildings.[6] 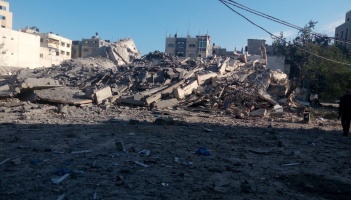 Similarly, civilians cannot be the target of military attacks which cause disproportionate loss of civilian life.[7] Al-Haq further stresses that an indiscriminate attack against the civilian population includes “an attack by bombardment by any methods or means which treats as a single military objective a number of clearly separated and distinct military objectives located in a city, town, village or other area containing a similar concentration of civilians or civilian objects.”[8] In this regard, Al-Haq is particularly concerned that the barrage of missiles, leading to the deaths of civilians, may amount to an unlawful and excessive use of force.

For over 11 years, Israel has subjected the Gaza Strip to a militarily-enforced land, air and sea closure, prohibiting the entry and exit of people and goods, amounting to unlawful collective punishment,[9] and creating a human-made humanitarian crisis for the occupied Palestinian population therein, more than half of whom are Palestinian refugees. Meanwhile, three Israeli military offensives have targeted the Gaza Strip, leading to thousands of fatalities and casualties, and destroying much of Gaza’s infrastructure, including water, electricity, and sewage.[10]

Since 30 March 2018, Palestinians in the Gaza Strip have been protesting against Israel’s prolonged occupation and militarily-enforced closure and calling for the realisation of inter alia their inalienable right of return as Palestinian refugees, to their cities and villages of origin from which they were expelled in 1948.

Al-Haq is gravely concerned with Israel’s provocative, excessive and unnecessary use of force, including lethal force, which may lead to a further escalation of violence in the occupied Gaza Strip, as well as the rest of the Occupied Palestinian Territory (OPT). Accordingly, Al-Haq reaffirms the following:

The international community must urgently and immediately take action to hold Israel to account for its widespread and systematic violations of international law, including those amounting to grave breaches in the OPT. Over the past five decades of its occupation, Israel has been allowed to enjoy a culture of impunity as it continued to violate the human rights of the occupied Palestinian population, denying them their rights to life, to return to their homes and villages of origin, and to self-determination, including permanent sovereignty over natural resources. The international community must finally take decisive action to bring Israel’s occupation and closure to an end.

[4] “Final Report to the Committee Established to Review the NATO Bombing Against the Federal Republic of Yugoslavia”, paras. 75-76.

[10] Al-Haq, Divide and Conquer – A Legal Analysis of Israel’s 2014 Offensive against the Gaza Strip, 2015, available at: http://www.alhaq.org/publications/publications-index/item/divide-and-conquer?category_id=4