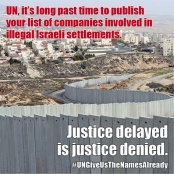 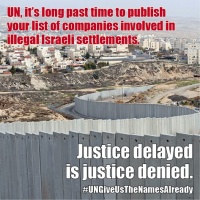 Join our social media actions to urge the UN High Commissioner for Human Rights, the Human Rights Council, and Member States to abide by their own commitments and publish the database on companies involved in Israel’s illegal settlements.

In 2016, the UN Human Rights Council voted in favour of establishing a database of companies involved in business activities with Israeli settlements in the Occupied Palestinian Territory (OPT). Israeli settlements are illegal under international law; a database of businesses with activities or relationships in settlements would provide transparency for States, businesses, and the public, and can be used to ensure that companies are not complicit in human rights violations and grave breaches of international humanitarian law.

Almost three years since the resolution calling for the Database, the UN has yet to publish the result of its work; this is reportedly due to political pressure from Israel, the United States and some European states. On 4 March 2019, the High Commissioner issued a letter stating that “further consideration is necessary” to fulfil the mandate, and that her Office will continue to finalize the “mandate in the coming months.”

These delays allow international and Israeli businesses to continue to exploit Palestinian natural resources, and contribute to and profit from Israel’s impunity for its expanding colonial settlement enterprise and human rights violations.

Together we can end corporate complicity in international crimes in the OPT.

Use the sample tweets and meme below with the following hashtags: #UNGiveUsTheNamesAlready, #StandUp4HumanRights and #BizHumanRights

[email protected] @UNHumanRights: In order to #StandUp4HumanRights we must end corporate complicity. Civil society and states need to know which companies are profiting from Israeli war crimes & prolonged occupation. #UNGiveUstheNamesAlready (Click to Tweet)

It has been three years since @UNHumanRights committed to publishing a list of companies profiting from Israeli war crimes. Enough is enough. Palestinian civil society calls on the UN to #StandUp4HumanRights @MBachelet We demand: #UNGiveUsTheNamesAlready (Click to Tweet)

The @UNHumanRights must live up to its commitments and publish the list of companies operating in settlements. By not doing so it is setting a precedent of capitulating to state pressure and failing to protect Palestinian human rights. #UNGiveUsTheNamesAlready (Click to Tweet)

[email protected]: Your three-year delay has allowed companies to continue to profit from a situation of prolonged occupation and injustice, while avoiding accountability for complicity in violations & war crimes. #UNGiveUsTheNamesAlready of companies profiting from Israel’s illegal settlements. (Click to Tweet)

For further information on the UN database of companies engaged in activities related to Israeli settlements: