Main Menu
Diplomatic Briefing: “The Great Return March: One Year On”
Latest Topics
Al-Haq and partners deliver an oral intervention at the 45th session of HRC on rights to safe drinking and sanitation
Open Letter: UAE and Bahrain’s Normalisation with Israel Incentivises Continued Colonisation of Palestine
Al-Haq Sends an Urgent Appeal Concerning Israel’s Tightening Restrictions and COVID-19 Outbreak in Gaza
Al-Haq Condemns Designations of International Criminal Court Prosecutor and Staff for Sanctions under US Executive Order 13928 as a Direct Threat to Justice in the Situation in the State of Palestine
Addameer and Al-Haq Send a Written Submission on Israel’s Failure to Protect Palestinian Prisoners Amidst COVID-19 Outbreak
Palestinian and Regional Human Rights Organisations Send Joint Written Submission on Gaza Ahead of the 45th Human Rights Council Session
Diplomatic Briefing: “The Great Return March: One Year On”
Date: 15 March 2019
15، Mar 2019 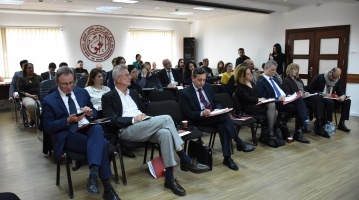 On Wednesday, 13 March 2019, Al-Haq jointly with the Palestinian Center for Human Rights (PCHR) in Gaza organized a diplomatic briefing on “The Great Return March: One Year On”, targeting the diplomatic community in the Occupied Palestinian Territory (OPT), including Member States of the United Nations (UN) Human Rights Council. The briefing, which took place at the Al-Haq Center for Applied International Law in Ramallah, addressed Al-Haq and PCHR’s documentation of the Great Return March protests, which have taken place on a weekly basis in the Gaza Strip since 30 March 2018. In addition, the briefing outlined the findings and recommendations of the UN Commission of Inquiry on the 2018 OPT protests, as issued on 28 February 2019.

Opening the diplomatic briefing, Al-Haq’s General Director, Mr Shawan Jabarin, highlighted the urgent need for accountability and justice in the context of the Great Return March, and encouraged Member States to support the draft resolution on accountability to be presented at the current 40th session of the UN Human Rights Council, with a view towards adopting and ensuring the implementation of the recommendations of the UN Commission of Inquiry. He underlined the culture of impunity enjoyed by the Israeli occupying forces (IOF) for widespread and systematic attacks against Palestinian civilians, which may amount not only to war crimes but also to crimes against humanity, as confirmed by the Commission of Inquiry’s findings in February 2019.

Speaking from Gaza over Skype, PCHR’s Director, Mr Raji Sourani, recalled that, as the one-year anniversary of the Great Return March approaches, Palestinian human rights organizations have documented the persistent peaceful nature of the protests, during which Palestinian civilians were unarmed and posed no threat to the lives of Israeli soldiers when they were shot and killed. As such, he highlighted that the IOF have unlawfully resorted to lethal force and committed wilful killings, amounting to war crimes. In this regard, Mr Sourani recalled statements made by Israeli officials and the fact that snipers had been deployed repeatedly to respond to civilian demonstrations, as evidence of an authorization to use live fire and a shoot-to-kill practice.

Placing the Great Return March within the context of Israel’s 11-year prolonged closure of the Gaza Strip, amounting to unlawful collective punishment, Mr Sourani appealed to the international community to “speak truth to power” and to act in the face of systematic crimes committed against the Palestinian people. Mr Sourani also welcomed the findings of the UN Commission of Inquiry, recalling that protesters were targeted while demonstrating hundreds of metres from the Gaza fence, including children, persons with disabilities, journalists, and health workers. Overall, Mr Sourani highlighted that the Gaza Strip is on the verge of collapse and that the UN has declared it would become uninhabitable by 2020.

The briefing further included a presentation by Dr Benjamin Bouquet, public health and human rights officer with the World Health Organization (WHO) in the occupied Palestinian territory. Speaking on behalf of WHO, Dr Bouquet emphasized the substantial barriers to achieving the right to health for Palestinians in the Gaza Strip, highlighting that, as of 28 February 2019, over 29,000 had been injured during the Great Return March, a quarter of whom were children. Throughout the Great Return March, WHO has recorded operational challenges to health workers, who have had to improvise due to limited essential supplies of medicines and medical disposables, and have worked at great personal risk, with three health workers killed and 633 injured since the start of the protests. 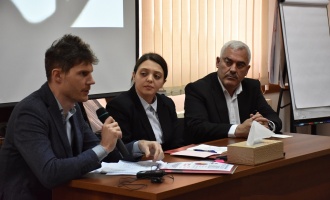 Critically, Dr Bouquet stressed that over 6,500 people have been injured with live ammunition, of whom more than 1,200 have been left with complex limb injuries requiring multiple surgeries and long-term follow up. Noting that “the high number of injuries, including serious trauma injuries, would overwhelm a health system in any country”, he raised concerns that Gaza’s health sector is under-equipped to provide longer-term physical and mental health rehabilitation to all those injured. At the same time, the approval rate for patient permits for treatment outside of the Gaza Strip has steadily declined, especially for those injured during the Great Return March, amongst whom only 18 per cent of applications to exit were approved, as of the end of February 2019. Overall, Dr Bouquet recalled the obligations of all duty bearers, and the specific obligations of Israel as occupying power to ensure the right to health and welfare of Palestinians, and the right of Palestinians to a life with dignity.

Addressing the diplomatic community over Skype, Al-Haq’s field researcher in the northern Gaza Strip, Mr Mohammad Abu-Rahma, placed the Great Return March not only within the context of 11 years of prolonged closure, but also within Israel’s systematic attacks against Palestinian life and livelihoods in the Gaza Strip since 2007. He reflected the deep sense of despair amongst the Palestinian population as a result of the unliveable conditions created by Israel’s suffocating closure, which has resulted in profound and unparalleled levels of aid-dependency, a 53 per cent poverty rate, 68 per cent food insecurity, and unemployment reaching 69 per cent amongst Gaza’s youth. It is within this context that the weekly protests, as part of the Great Return March, began on Land Day 2018. Since then, Al-Haq has documented the killing of 194 Palestinians, including 42 children, seven persons with disabilities, three paramedics, and two journalists. In light of Israel’s violent suppression of the unarmed civilian protests, Al-Haq’s field researcher raised serious concerns that the one-year anniversary of the Great Return March on 30 March 2019 may once again be heavily suppressed by the IOF, in violation of Palestinians’ rights to life and health, to freedom of peaceful assembly, and to freedom of expression.

Finally, Al-Haq’s legal researcher, Ms Rania Muhareb, underlined that the Great Return March did not emerge out of a vacuum, but out of an urgent need for action from the international community, noting that the protests are deeply rooted in the decades of rights deprivations to which Palestinians have been subjected in addition to the prevailing climate of impunity. She recalled that the Great Return March is also set against the backdrop of over 70 years of prolonged displacement of Palestinian refugees and over 50 years of occupation, stressing that within this context any meaningful accountability will require third States to genuinely address the root causes of Palestinians’ demands. This includes the urgent need for Israel to lift its closure of the Gaza Strip with immediate effect, as recommended by the UN Commission of Inquiry, and to ensure that Palestinian refugees, making up a majority of Gaza’s population, are guaranteed their inalienable right of return to their homes and property, as mandated by international law and reaffirmed in over a hundred UN resolutions.

Overall, Al-Haq and PCHR called on the diplomatic community to ensure accountability for Israel’s widespread and systematic violations against Palestinians, including those at the origin of the Great Return March, and to guarantee the protection of Palestinians as they continue to exercise their right of peaceful assembly in the occupied Gaza Strip, in the weeks leading up the one-year anniversary and thereafter. Ultimately, Al-Haq and PCHR called on States to support the draft accountability resolution at the UN Human Rights Council, both to ensure the adoption of the Commission of Inquiry’s recommendations and to guarantee effective follow-up and implementation. In this regard, the organizers also stressed the urgent need for the UN High Commissioner for Human Rights to refer the confidential dossier on perpetrators prepared by the UN Commission of Inquiry to the International Criminal Court, in light of the ongoing preliminary examination by the Office of the Prosecutor into the situation in Palestine since 13 June 2014.

Materials shared during the diplomatic briefing: