Main Menu
Warning on Annexation
Latest Topics
Palestinian Civil Society Calls for Effective Measures by all States to Stop Israel’s Illegal Annexation of the Occupied West Bank and Grave Violations of Human Rights
Palestine: Israel’s Illegal Annexation of Occupied Palestinian Territory Must Be Countered by International Community
Joint Statement: The Nakba at 72: A Legacy of Settler-Colonialism & Apartheid over the Palestinian People
Palestinian Civil Society Organizations Issue a Statement of Alarm Over the Selection of Emi Palmor, Former General Director of the Israeli Ministry of Justice to Facebook’s Oversight Board
Annexing A City: Israel’s Illegal Measures to Annex Jerusalem Since 1948
Al-Haq Condemns Attempt to Smear Al-Haq, Its Staff, and Partners in Recent Report
Warning on Annexation
08، Apr 2019 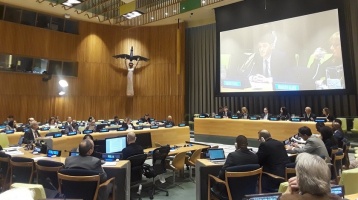 On 4 April 2019, Al-Haq participated in the United Nations Forum on the Question of Palestine on the theme of “The threat of de facto annexation- What next for Palestine?” The objective of the Forum was to “raise awareness of the creeping annexation in the occupied Palestinian territory including in and around East Jerusalem and highlight viable and practical strategies to end it.” The one-day forum consisted of two panels. The first panel highlighted the reality in the occupied Palestinian territory (OPT), including the measures taken by Israel for the de jure and de facto annexation of Jerusalem and settlements in Area C respectively. The second panel considered viable and practical steps to stem annexation, which included discussion of Irish legislation to ban the import of Israeli settlement products by Senator Frances Black.

The Forum comes shortly after the United States unlawfully recognized Israeli sovereignty over the Occupied Syrian Golan, and over a year after the United States recognized unlawfully annexed Jerusalem as Israel's capital. In continuing on the path of illegal annexation, Israeli Prime Minister Benjamin Netanyahu announced on 6 April 2019 that he would begin annexing the West Bank should he be reelected.

As highlighted by experts at the UN Forum, Third States must act to ensure that they uphold their obligations under international law, including as delineated in relevant UN resolutions. This should include an immediate ban on settlement products by third States, and as recently recommended by the UN Commission of Inquiry, an investigation into Israeli war crimes and, if appropriate, the prosecution of suspected perpetrators of international crimes.

Panel Expert, Conor O'Neil, pointed out, "Annexation is not just some abstract concept that is being threatened, because the feedback from colleagues and civil society in the region is that, annexation is a pretty accurate description of the reality on the ground already. There might come a specific moment, a specific event, that marks a formal de jure annexation, but in reality that moment will only be the high watermark of a process that took place over decades - it will have been inch by inch, settlement by settlement, fact on the ground, by fact on the ground. As an international community, we will not be able to say that we didn't see it coming, or that it happened over night, or that it was a specific moment. It does not happen in a moment, it happens gradually. It happens as the result of decades of missed opportunities"

The United Nations Forum on the Question of Palestine can be watched here and here.