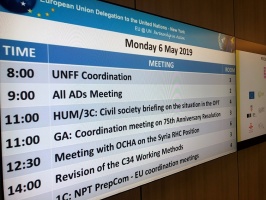 Between 6 and 10 May 2019, Al-Haq carried out a series of meetings and briefings, along with partner organisations in the United States (U.S.), with the United Nations (UN) offices, diplomats and U.S. Congressional offices. On Monday, 6 May 2019, Al-Haq, along with the International Federation for Human Rights (FIDH), briefed approximately 20 Member States of the European Union (EU) Delegation to the UN in New York on the continued violations committed against Palestinians in the Gaza Strip, including in regards to the Great Return March, the prolonged closure and continued military offensives carried out against Palestinians therein. Al-Haq highlighted the plight of Palestinians in realising their basic rights, including the right to life, dignity, and an adequate standard of living, persistently denied as a result of Israel’s prolonged military occupation. Al-Haq also highlighted the role that the EU should take in ensuring accountability, particularly for acts committed by Israel during the Great Return March which may amount to war crimes and crimes against humanity.

Al-Haq recalled the findings and recommendations of the UN Commission of Inquiry in this regard, including those relating to third States and their obligations under international law, including to arrest persons alleged “to have committed, or who ordered to have committed international crimes.”[1] Al-Haq urged the EU to implement the recently adopted Human Rights Council Resolution of March 2019, pertaining to accountability as well as to take immediate and practical steps to lift the closure off the Gaza Strip, which has resulted in a dire man-made humanitarian crisis.

In addition, Al-Haq briefed the Delegation on the human rights impacts of the de jure and de facto annexations of Jerusalem and Area C respectively. More specifically, Al-Haq highlighted Israel’s systematic practices and policies aimed at the transfer of Palestinians and the erasure of Palestinian presence from Jerusalem. Al-Haq urged EU Member States to take individual and collective action beyond statements of condemnation to ensure that the legal status of Jerusalem is respected and guaranteed. Furthermore, Al-Haq called on States to challenge Israel’s de facto annexation of Area C, including by ensuring the implementation of UN Security Council Resolution 2334 of 2016, and banning settlement products. Al-Haq also expressed its deep concern and disappointment on the obstruction of implementation of UN Human Rights Council resolution 31/36 and the publication of a database that lists business enterprises operating in or with Israeli settlements. 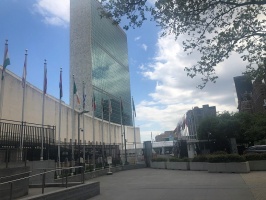 Also on 6 May 2019, Al-Haq and FIDH met with Mr. Khassim Diagne, the Director for Political and Human Rights Affairs at the Executive Office of the Secretary General. Among other issues, Al-Haq highlighted Israel’s disregard for international law and UN resolutions, and continued refusal to cooperate with UN mechanisms and bodies. Moreover, Al-Haq highlighted the lack of cooperation of UN Member States on Agenda Item 7 in the Human Rights Council and continued lack of political will to uphold international law norms and standards in the OPT.

On Tuesday, 7 May 2019, Al-Haq and FIDH met with Mr. Adama Dieng, the Special Adviser to the UN Office on Genocide Prevention and the Responsibility to Protect. There, Al-Haq underscored Israel’s decades long-targeting of the Palestinian population throughout Mandatory Palestine, including acts which ultimately seek the erasure of Palestinian presence. On Wednesday, 8 May 2019, Al-Haq and Al-Marsad presented on Israel’s annexation in the OPT and the occupied Syrian Golan in a roundtable discussion at the Open Society Foundation in Washington D.C.

Additionally, on 8 and 9 May 2019, Al-Haq, along with the US Campaign for Palestinian Rights (USCPR) and American Friends Service Committee (AFSC), carried out a series of meetings with 15 offices of members of Congress. The meetings emphasised the detrimental impacts of the U.S.’s unconditional support of Israel, its embassy move to Jerusalem, and condoning of international law violations, including annexation. The meetings focused on annexation, collective punishment, and excessive use of force against Palestinians throughout the OPT, amongst other Israeli policies, and underscored the need to end U.S. military aid to Israel.

[1] Report of the detailed findings of the independent international Commission of inquiry on the protests in the Occupied Palestinian Territory, 18 March 2019, A/HRC/40/CRP.2, para. 995