The fifth session of the Intergovernmental Working Group (IGWG) on transnational corporations and other business enterprises, saw UN Member States, experts, hundreds of civil society organizations, social movements, and other relevant stakeholders convene to discuss the revised draft of the proposed binding treaty on business and human rights (hereinafter Legally Binding Instrument). The fifth session was held between 14 and 18 October 2019, chaired by the Ambassador of the Permanent Mission of the Republic of Ecuador to the United Nations. As part of this session, Al-Haq took part in a number of strategy meetings, including with ESCR-Net, Treaty Alliance and the Global Campaign to Reclaim People’s Sovereignty, Dismantle Corporate Power and Stop Impunity (Global Campaign), and delivered joint oral interventions, participated in side events, a conference, and other advocacy events. 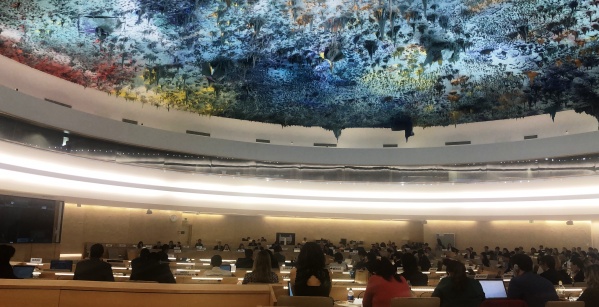 During the session, Al-Haq delivered three joint oral interventions. First among these was delivered on behalf of Al-Haq and ESCR-Net on the Preamble and Article 1 of the revised draft of the Legally Binding Instrument. The oral intervention brought attention to the importance of recognizing the right to self-determination and permanent sovereignty over natural resources within the document, highlighting that to do otherwise would be to neglect the collective rights of people to their own natural wealth and resources. The intervention further stressed the need to include the rights to life, liberty and security of person within the text, in order to ensure the protection for such rights against corporate human rights abuses. The intervention also recommended the use of the term “contractual relationship” in the text be replaced with “business relationship”, in order to ensure the applicability of its provisions to situations which would be covered by the latter but not the former.

Secondly, Al-Haq delivered an oral intervention under Article 5, on behalf of Al-Haq, ESCR-Net, the International Federation for Human Rights (FIDH), and The Centre for Research on Multinational Corporations (SOMO), Trócaire, Stop the Wall, Via Campesina, and the Trade Union Confederation of the Americas. The organisations welcomed the introduction of paragraph (3)(e) in Article 5 in the revised draft of the Legally Binding Instrument, concerning due diligence requirements in conflict and occupation settings. Nonetheless, the organisations recommended that the text of the Article be brought further in line with that of the UN Guiding Principles on Business and Human Rights in order to provide clarity and concrete mechanisms to ensure that States can take action to directly prohibit businesses from pursuing predatory business operations and relationships in settings of conflict and occupation. To this end, the intervention recommended that the language of the text be amended to that of “immediate appropriate and effective actions” for the protection and vindication of human rights. The intervention further recommended that where businesses fail or are unable to conduct enhanced human rights due diligence and risk being involved in human rights abuses and internationally recognised crimes in the context of conflict and occupation, Article 5 should provide for the possibility of explicitly prohibiting businesses from pursuing their relevant operations and relationships.

The third joint oral intervention delivered by Al-Haq was on behalf of Al-Haq, SOMO, Trócaire, and ESCR-Net regarding Articles 7-9 of the revised draft of the Legally Binding Instrument. The organisations recommended that the language be brought further in line with that of international humanitarian law, particularly The Hague Regulations 1907, the four Geneva Conventions 1949, and the Additional Protocols of 1977. In relation to Article 9 and Article 5(3)(b), the organisations recommended the consideration of Articles 7, 8, and 47 of the Fourth Geneva Convention (1949) which prohibit the occupied population and their political representatives from concluding agreements resulting in the renunciation of rights guaranteed under the Convention. The intervention referred to the strict protections afforded to public immoveable property in occupied territory, under Article 55 of the Hague Regulations, with obligations to safeguard the properties capital, accompanied by the Article 43 principle that resources be administered for the benefit of the occupied population, thus highlighting the necessity for replacing the requirement for “consultations” in Article 5.3 with “consent”. The organisations further welcomed the inclusion of individual liability in Article 6 to ensure corporate accountability. Meanwhile, the organisations called for further clarification on the question of universal jurisdiction under Articles 7 and 9, while calling for express provision for forum necessitates countering the deliberate hindering and denial of justice rampant in conflict and occupation settings.

Moreover, Al-Haq endorsed three oral interventions. First, that of ESCR-Net member organisation Tebtebba Foundation on Article 5, which stressed the need to include more robust measures to protect the rights of indigenous peoples, including the requirement of “Free, Prior, and Informed Consent” enshrined in Article 5(3)(b) of the UN Declaration on the Rights of Indigenous Peoples. Al-Haq also endorsed an oral intervention made by ESCR-Net member Project Poder regarding Article 5, which highlighted the need to combat the insidious practice of corporate capture in order to ensure the protection and vindication of human rights. To this end, Poder stressed, it is imperative that Article 5(5) remain in future drafts of the Legally Binding Instrument. Finally, Al-Haq along with Franciscans International and FIDH, endorsed an oral intervention made by ESCR-Net member organisation CELS regarding Article 4 on the rights of victims to information. The intervention highlighted the need of individuals, communities, and organisations to adequate access to information concerning violations.

Al-Haq’s engagement during the session also included co-organizing and participating in side events. On 15 October 2019, Al-Haq participated in a side event organised by Trócaire and Christian Aid entitled “Putting intersectionality front and centre: A UN Treaty to address the impacts of corporate impunity on women and indigenous peoples.” Speakers at this event included Juana Toledo, a Mayan indigenous defender from Guatemala; Anna Shahnzaryan, an Armenian leading environmental leader; Bilio Bolaños, a human rights defender from CAJAR and member of the indigenous community of Awá, Nariño, Dr. Susan Power, Head of Legal Research and Advocacy Department at Al-Haq; and Alejandra Scampini, a corporate capture specialist from Project PODER. Dr. Power presented on corporate involvement in Israel’s prolonged military occupation and colonisation, including policies of forcible transfer, house demolitions and coercive environments, and their impacts on women and girls in particular. 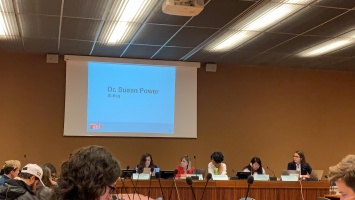 On 16 October 2019, Al-Haq and NOVACT organized a side event entitled “A Legally Binding Instrument: Another Tool of Resisting Corporate Impunity during Occupation”. This event featured Letícia Paranhos, Friends the of Earth International; Maha Abdallah, Al-Haq; Mahfud Moh Lamin Bechri, NOVACT; Maren Mantovani, Stop the Wall; Mulay Lahsan Mohamed Embarec AMRPEN; and facilitated by Lina Maria Gonzalez Correa, NOVACT. The side event showcased the need for a legally binding instrument in light of corporate impunity in situations of occupation, as well as relevant analysis and recommendations on the revised draft of the Legally Binding Instrument.

Al-Haq’s extensive advocacy efforts were rounded off by participating in a public conference. On 15 October 2019, Al-Haq presented at a conference organised by the Global Campaign, entitled “Transnational Corporations and the Walls-Industry. Migrant, Women and Palestinian Movements Resistances” on the various methods by which corporations contribute towards the “Wall industry” in the Occupied Palestinian Territory, including through construction, maintenance, and the exploitation of Palestinian natural resources. 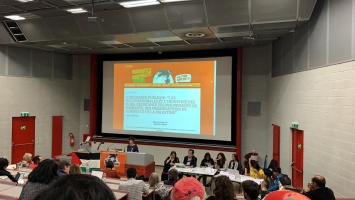 In Barcelona, on Tuesday, 22 October 2019, Al-Haq participated in a public event organized by La Fede.Cat, supported by NOVACT and Suds, to present case studies from the ground relevant to corporate impunity in the Occupied Palestinian Territory and to reflect on the recent negotiations on the revised draft of the Legally Binding Instrument. Others were participating in the event included Armenian Environmental Front, Movimiento Rios Vivos Antioqua from Colombia and the Global Campaign.

It should be noted that the negotiations on the revised draft of the Legally Binding Instrument during the fifth session were concrete, as UN Member States and civil society organisations contributed substantial substantive text proposals. The recommendations and conclusions of the fifth session were adopted by the IGWG. Meanwhile, civil society participation in the process was questioned by some UN Member States, including China and Brazil, whereas other Member States, including Palestine and Egypt, called for the continued involvement of civil society in the process, considering importance. Nonetheless, States agreed on the need to carry out more frequent and direct negotiations amongst them.