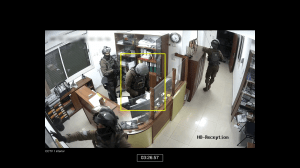 In partnership with: Forensic Architecture.

The incursion, raid, and closure, are the latest in a pattern of repressive attacks by Israel, targeting Palestinian civil society organisations who advocate for human rights and international rule of law, and call for an end to Israel’s aggressive 74-year colonial and apartheid regime, that denies the collective right to self-determination of the Palestinian people and the right of refugees to return.

At around 3:00 a.m. on 18 August 2022, the Israeli Occupying Forces (IOF) raided the offices of seven Palestinian human rights organizations. The IOF arrive on Rukab Street, a main road leading to central Ramallah. Composed of at least nine military vehicles and at least sixteen IOF soldiers of different units, the military convoy block the road in front of Al-Haq's office building.

Al-Haq, for the security of the premises had installed CCTV cameras recording events in and around their offices. Forensic Architecture with Al-Haq's new Forensic Architecture Investigation Unit, mapped and synchronised the sporadic footage, as well as additional footage obtained from nearby shops on Rukab Street.  The team reconstructed a timeline of events by verifying and correcting the time stamps and meta data attached to the videos.  The footage shows how the IOF spent over an hour inside Al-Haq’s office, appearing to be led by Special Reconnaissance Forces.

While some Israeli soldiers search through Al-Haq's organizational and administrative documents, others appear to socialise—taking trophy photos and group selfies as an act of domination, delivering a message of humiliation to staff, as a form of insult and disrespect to the work of the organisation. Before leaving, the IOF seal the front door of Al-Haq’s office with a welded metal sheet, attaching a military order declaring the organization an unlawful association.

This military operation is the most recent rendition of a range of physical and digital attacks against Al-Haq and its employees, and the targeted civil society and human rights organisations. Such attacks seek to stifle the ability of Palestinian civil society to monitor and document Israeli apartheid practices, and hold Israel accountable for crimes committed against the Palestinian people.